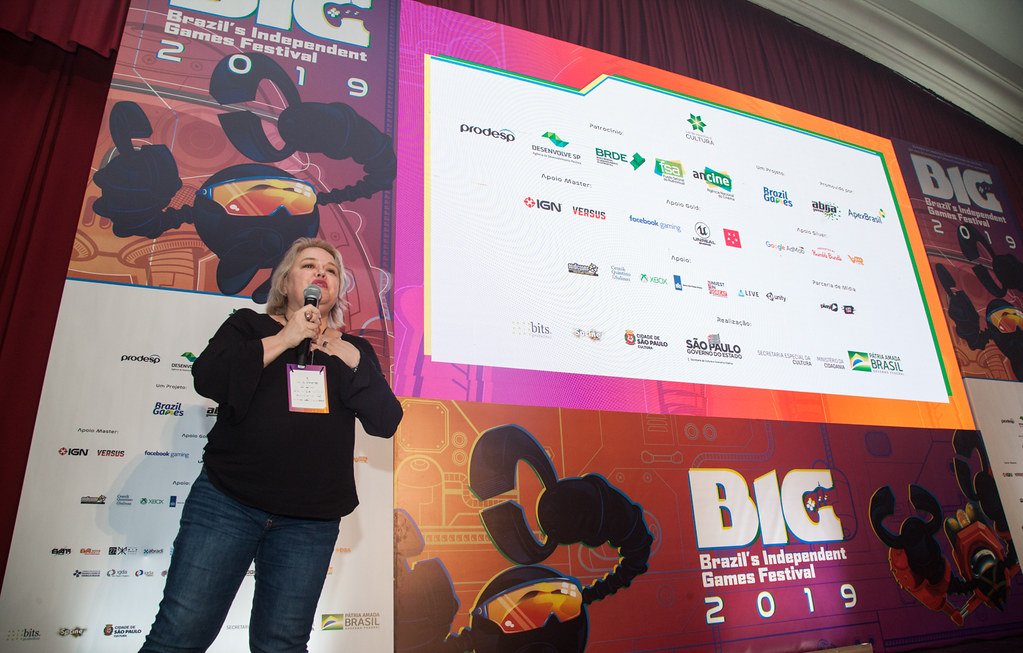 Brazil continues to prove why it’s a force in gaming. The Latin American country is the 15th largest gaming market in the world, with 75 million people accounting for $1.5 billion in video game revenue. We’ve seen a handful of breakout hits from different studios. Most famously, the critically acclaimed arcade-style racer, Horizon Chase, the virtual reality darling Pixel Ripped 1989, and one of the best reviewed games of 2018, Celeste, which was created in conjunction with indie studio, MiniBoss.

At the heart of the surge is the BIG Festival, an annual indie game show that takes place in the massive city of Sao Paulo. Now in its seventh year, BIG Festival is the premier event in Latin America for publishers in search of the next crop of indie game hits and developers looking to get noticed. And with companies like Google, Bandai Namco, and Facebook attending this year’s show, there’s tremendous potential for growth.

While at BIG Festival 2019, we met up with Eliana Russi, executive manager of Brazil Games, to discuss what makes the show special, and the potential role that Brazil stands to play in the video game business.

GameDaily: It’s great to be at BIG 2019! What would you say is different about this year compared to previous shows?

Eliana Russi: First of all, we changed venues from the cultural center last year to Club Homs, which is a more central location on the famous Paulista Avenue in Sáo Paulo. Having things in one place makes it easier for people to find what they are looking for. Additionally, we were supposed to have less content sessions but we have 125 in three different auditoriums.

It also helped that we have more investors, and the international delegation shifted a bit. For example, now there’s a Russian delegation that’s brand new this year. We had never explored doing businesses with Russia before.

We had the Nordic Games Discovery Contest, and Humble Bundle awarded a prize at this year’s show for the best game.

We’re also growing in popularity. With our budget we were able to bring 42 people to Brazil, but our group is made up of 120 people. We were unable to pay for two thirds of these people, but they still came to the show. There’s a much higher level of interest, where BIG Festival has become a really good place for doing business.

I also think that it became clear to our neighbors, like Argentina, that we’re not competing with them. They can see that having one big spot for people to do business is good for everyone. Several mini shows in Latin America wouldn’t have given the same impact that we needed.

GD: Is there anything missing from this year’s show?

ER: We’d love to have more inspirational sessions. Specifically, speakers who talk more about art and narrative in gaming. Not that business or design cannot inspire people, but I’d like to see more keynotes that reaffirm in people that “yes, this is why I dreamed as a boy or a girl to be in the gaming industry.”

GD: What draws so many people to the show?

ER: First of all, we are in Sáo Paulo. It’s a 24-million-person city, with a population of a small country. Whatever you do here, you will reach your audience. It’s a super urban metropolis, people love video games, and there are many developers nearby. This is the area where they breathe… the artists, the developers… all of the people who create.

GD: What is Brazil’s impact on the video game business?

ER: There’s a lot of talent in Brazil. People have strong backgrounds in technology and a unique artistic perception of the world. Additionally, many of them are bilingual and speak English because they play games in English. We’re also a large country with a high number of people online.

GD: What would it take for Brazil to make the same kind of impact as the United States and Japan?

ER: A few years and a lot of money! We don’t have triple A studio like an Ubisoft… a studio of that size. Senior developers have worked on triple A games, but that’s the extent of that. We also need more education and experience in order to grow.

That said, maybe we are not going to be like the U.S. We might become more like Finland, with five to six studios with strong IPs.

In addition to hosting B2B meetings and speakers, BIG Festival also hands out awards to the best indie games at the show. Check out this year’s BIG Festival 2019 award winners to find out who received top honors.