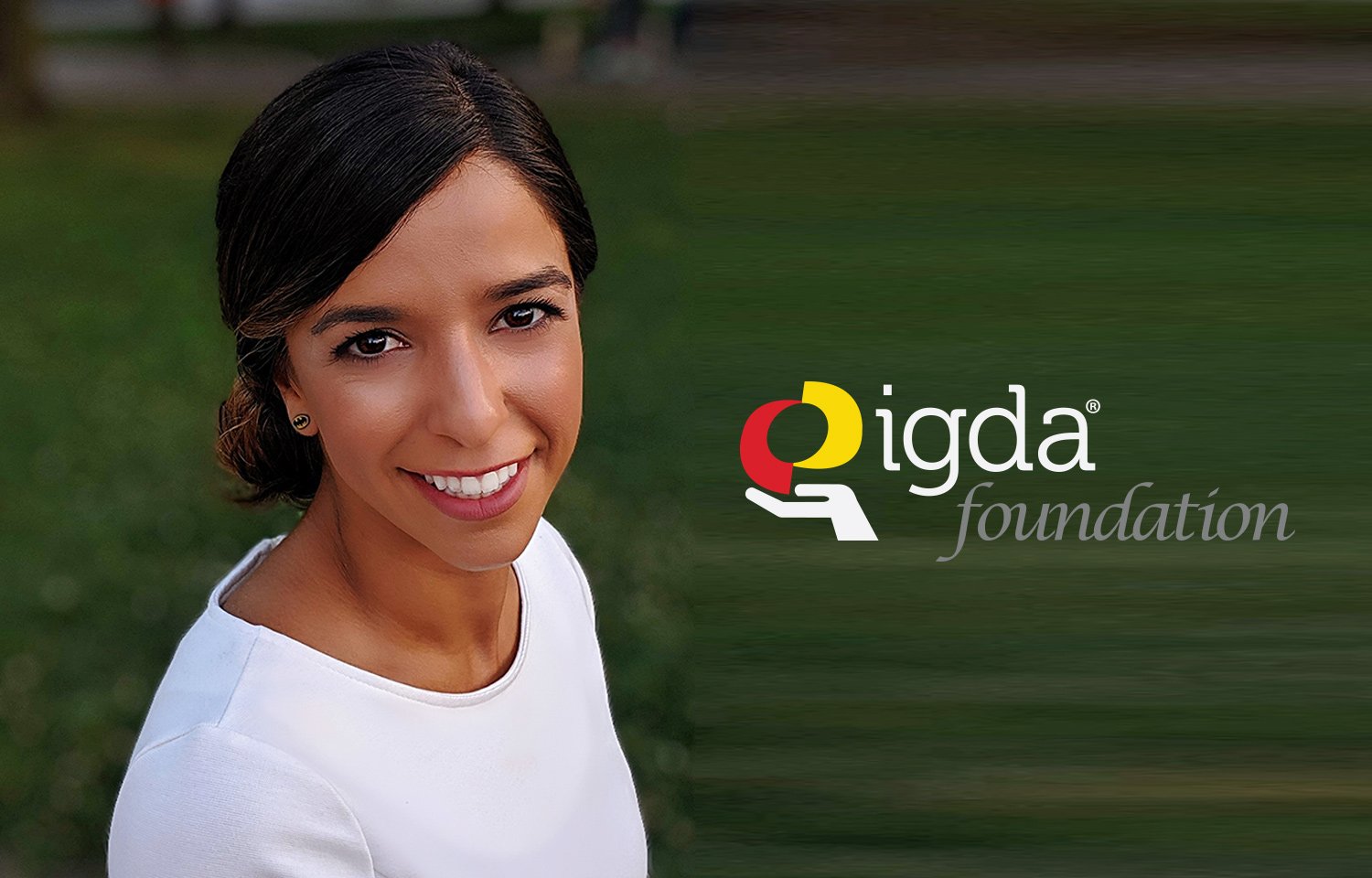 Nika Nour's face hurts from smiling so much. Nour describes herself as an incredibly excited person and plans on bringing that enthusiasm to her new position as the executive director of the IGDA Foundation. The IGDA also appointed a new executive director, Renee Gittins, but the Foundation exists as a complement to the IGDA itself. While the IGDA is focused on enabling developers to have healthy, sustainable careers, the Foundation works toward ensuring that those careers are a part of diverse and inclusive studios and work environments.

Nour's background is, as she describes it, "a Swiss army knife resume." Prior to her new position at the IGDA Foundation, Nour worked for three years at the ESA first as the director of federal government affairs before becoming the head of public affairs. Before that, Nour spent three and a half years working with Internet Association, which is "dedicated to advancing public policy solutions to strengthen and protect an open, innovative and free Internet."

"I basically eat, breathe, and sleep anything relevant to D&I [diversity and inclusion]," Nour told GameDaily. "Prior to… the ESA, when I was working on internet related issues at large, I was constantly having an eye towards making sure we were inclusive from our staffing to our interns, to how we're navigating policies and putting together committees, as well as our media campaigns."

In every role that Nour has held, she's worked toward ensuring that marginalized people felt empowered and heard. But Nour isn't looking at D&I as some separate piece of herself -- she's a first-generation American who grew up with her set of obstacles to overcome, including growing up in a home where video games weren't exactly a favorable hobby. Nour clearly didn't let that those challenges and obstacles stop her and she's looking to bring her wealth of knowledge, as well as her electric excitement, to the IGDA Foundation.

Nour echoes Blizzard's Kelly Stevens, in that the best case scenario is that diversity and inclusion efforts within the game industry are no longer necessary.

"We need to make sure that I am basically out of a job," Nour laughed. "I'm literally working towards my own unemployment. That's genuinely the goal. I want the board to fire me because D&I is no longer a problem that needs solving."

"I love organized fun," Nour said with a grin, as she told me she might've been a camp counselor in another lifetime. "There's a hot seat element to working in diversity and inclusion, but there's a lot of fun in it as well. This is a real opportunity for us to forge new paths for individuals to take a look at the programs we're offering, but also start a listening tour with companies, players, game developers on what the next step solutions [are].

"You cannot, no matter what your job is in the gaming space, you cannot have a job and not have fun doing it," she continued. "And when you're serving, when you're trying to reach this higher purpose of inclusivity, you don't really feel like you're working."

Even though fun may be at the root of Nour's approach to her new position at the IGDA Foundation, she knows that the Foundation needs to hold gravitas as well as its ongoing alacrity. So, in Nour's first 90 days as executive director of the IGDA Foundation, she'll be putting existing programs through their paces to ensure that they're exactly what they need to be to serve the IGDA's communities. Part of that work will require her to do a "listening tour with major publishers, game developers, companies, big and small, as well as the stakeholders of everyone engaged in D&I."

Anyone who works in D&I, or has talked to folks who are enmeshed in it, laments that industry (in games, tech, and elsewhere) is always stuck in Diversity 101, rather than moving things along to where they need to be to support further D&I work.

"I think it's time to start a series of round table discussions on where we are today," Nour noted. "What are the gaps? How is it that the Foundation can better serve the industry and the ecosystem and developers at large? And how can we be the house that funnels solutions to make everything awesome?"

It's a challenging road ahead, especially with the global game industry in the shape that it's in, but Nour is dedicated to creating an atmosphere where D&I specialists from outside the game industry can settle in and do the work that needs to be done. Nour likens it to building a home with comfy bedrooms so that people will feel comfortable enough to stay.

"A lot of things you hear about D&I is [that] everybody's looking to get people in the door that are of D&I backgrounds," Nour said. "I'm really focused on making sure that we build a house that ensures that those people that come in are successful. I don't want individuals coming into the industry and leaving in two years because they're just fed up with the status. We need to build bedrooms. We need to make sure that it's a space where people are comfortable and welcome and they don't want to leave us."

Attracting talent and "funneling that megaphone" back into the game development community from places that are "outside of our bubble" is part of Nour's strategy going forward.

"[We need to] make sure that we're highlighting the positive achievements of [the] diverse community players and developers that already exist," she stressed. "Telling that story, making sure that they're pushed out and upward and promoted. When you look at industries like game, like music or Hollywood or actors and actresses, their key players are constantly out in the open."

"The second thing that I was hoping to achieve in the next six to 12 months is figuring out how to scale the impact of the IGDAF," Nour continued. "I think right now we do an amazing job at high touch values for players and members at GDC and the upcoming event we have -- the One Gamer Fund, which channels six other charities that work in the video game space. But how do we really magnify and use our programs to reach more people, to have that same high touch value, but to people who might not be physically accessible to us."

Accessibility continues to be a big challenge for developers outside of North America who are looking for similar quality in resources, time, and connections. Unfortunately, because of the American government, fewer people are being granted temporary visas to visit the U.S. for important events like GDC, DICE, and our own GameDaily Connect USA. Thankfully, we're seeing an uptick in online conferences like gamedev.world and LudoNarraCon, which helps with some pieces of accessibility. Gamedev.world is an especially excellent resource as all of the panels and talks are available in a multitude of languages to reach as many people as possible throughout the conference.

Alongside the accessibility challenges that Nour is looking to address, she's conscious that the quest for a diverse, inclusive industry is in danger of becoming yet another corporate initiative, which is every D&I expert's worst nightmare: a precursor to "checkbox diversity."

"I can see the challenge of people not necessarily continuing to embrace the culture of opening up diversity and inclusion," Nour asserted. "D&I is not a budget line. It is not a talking point. It is not something you put down on a corporate sheet to check the box. And I'm worried that it's becoming this catch phrase for individuals that are looking to kind of hit a mark and say that they've done it and move on. There's a lot of individuals that have very good intentions, very well meaning, but I'm constantly running into bandaid solutions, not long-term growth."

But even among the sea of challenges, which Nour doesn't classify as worries because she's not the sort of person to worry all that much, the IGDA Foundation is a "very clear and very bright north star." Nour credits the entire organization, from volunteers all the way up to the executive board members, for being laser-focused on what the IGDA Foundation's mission is.

"There's very little turnover in our directors and in the programs that are running them and we have amazing, amazing, amazing list of alumni that have engaged with everything from velocity, which really helps women and non-binary identifying gender groups to the IGDA scholars program, which has the prestige of being in the industry for 19 years."

It's clear that with Nour at the helm of the IGDA Foundation, the organization is going to be going through a kind of metamorphosis. The Foundation has only been around for five years, as it was established in 2014, and while it hasn't exactly been quiet, it hasn't been loud, either. Nour's gregarious approach is steeped in years of experience on the frontlines of D&I in games and tech, but it's tempered by the weight of the work that still needs to be done.

She may be smiling through it all, and yes, her face might hurt as a result, but Nour's dedication to the hard road ahead is plain.

"This is exciting to work with such good people and to make sure that we're just looking forward with a purely radically positive approach to the video game industry," she said. "You know, we're not going to let the negative committee in our minds dictate the agenda for the video game industry. We're here to make sure that we're pushing forward and taking down obstacles for those who can't."