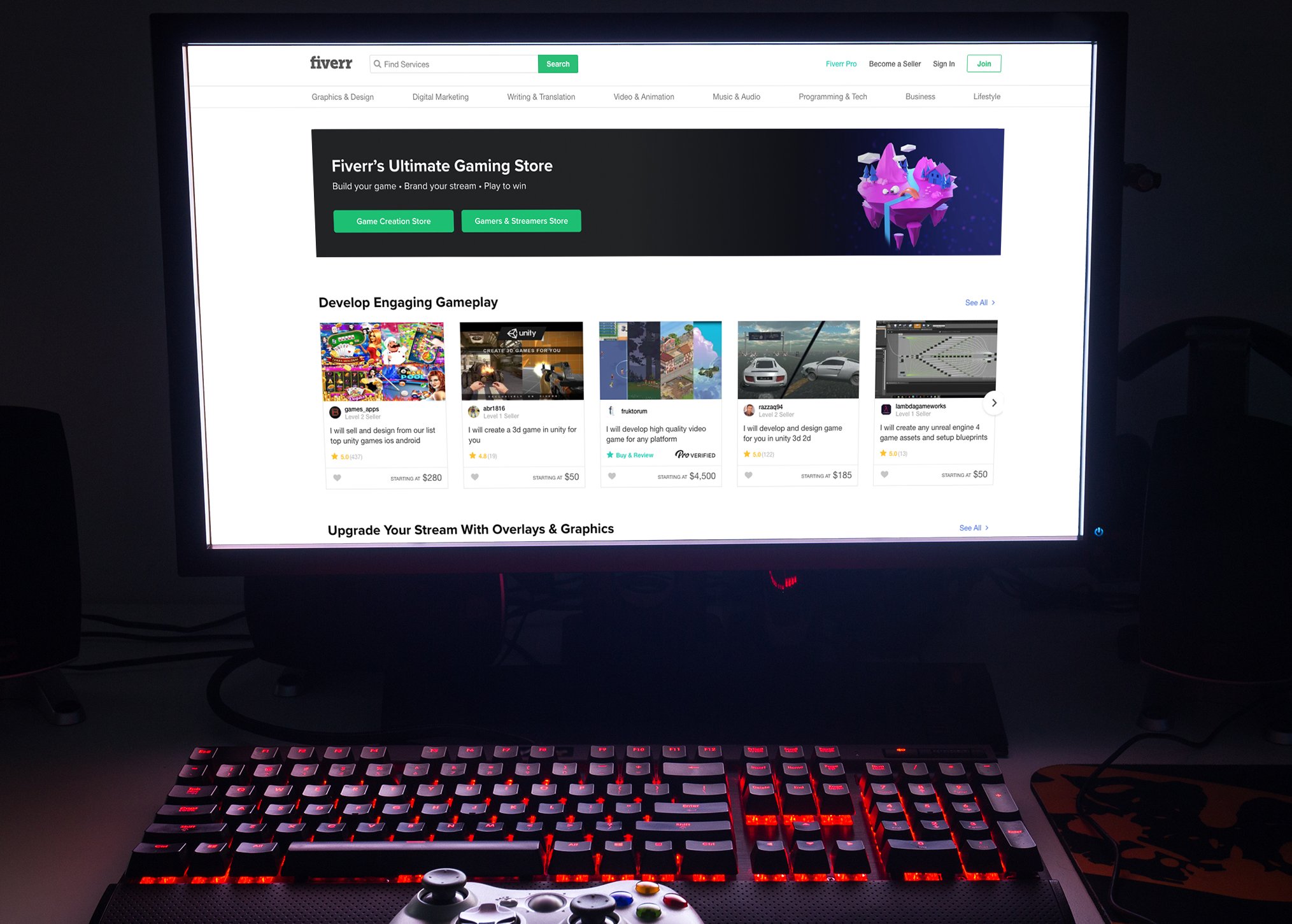 We've received a statement from Fiverr regarding the new category on their service marketplace.

"Fiverr doesn't set any prices for the work offered we just help build the structure for the service. Price is completely determined by the seller. Sellers set their own prices based on the value they place on their time and experience and their knowledge of the marketplace, this sees prices continue to rise on the platform and we expect to see this trend apply as the Game Store is rolled out."

According to the same statement provided to GameDaily, Fiverr also provides tools to "help sellers manage their time:"

While these little steps towards empowering freelancers trying to scrape together a living in the gig economy are laudable, Fiverr is going to have a hard time shaking off the glorification of overwork.

Fiverr, the service that advertises cheap freelance and hiring work, has announced the introduction of a new category specifically for gaming.

The new category is aimed at aspects of games development, such as design, writing, animation, QA, production, music, overall development, and more, as well as previously advertised aspects, including designing overlays for streaming and coaching for games like Fortnite, League of Legends, Minecraft, and Counter-Strike.

“Over the last year, Fiverr has seen rapid organic growth in gaming-related purchases from buyers and gig registrations by sellers,” said Fiverr CEO Micha Kaufman in a statement. "Launching our Gaming Store brings us another step closer towards our goal of being the everything store for digital services. It provides convenient access to high quality gaming talent and gives our freelancers additional opportunities to do what they love. We want to help power the current growth that exists in the broader gaming industry, with the freelance talent and services to help game creators meet their needs."

However, Fiverr has come under significant pressure in the past to explain its glamorization for cheap labor and the amount of work that is provided. Within the gaming category itself, the cheapest for game design we could see starts at roughly $5.25 with the highest it going for being $4,720. Meanwhile, asset design starts at the same price point of $5.25 and the highest at $42. Finally, for trailer editing, pricing begins again at $5.25 with the highest we could find going for around $2,620.

It also comes at a time when the industry has started to, albeit slowly, come out against crunch culture. Studios are beginning to move away from working too many hours on a game during its development, whether mandated or expected. Early this week, non-profit mental health charity Take This released a white paper on mental health in the games industry that said half of game developers who were surveyed were expected to crunch at their job.

This follows a year of stories exposing the practice at several major developers, including Rockstar’s handling of it during the development of Red Dead Redemption 2, and what the industry is doing to counter-act it. Destiny developer Bungie has said its delayed content for Destiny 2 in an effort to better balance work and life. Nintendo has also said it pushed the anticipated release of Animal Crossing: New Horizons to March 2020 to also provide an improved work-life balance for developers.

GameDaily approached Fiverr for a statement regarding crunch culture and the ongoing criticisms from creatives, but did not respond by publication time. We will update when a response comes in.

The past criticisms towards Fiverr for its glorification of overworking may put the company under a bigger spotlight, especially as the platform is offering services with games development. Underpayment of creative work is a drum that creatives have been beating for years now, especially in response to Fiverr. But having a gaming specific category will likely put Fiverr in the game development community's crosshairs as the industry moves away from underpayment and overwork in favor of a holistic approach to work-life balance.