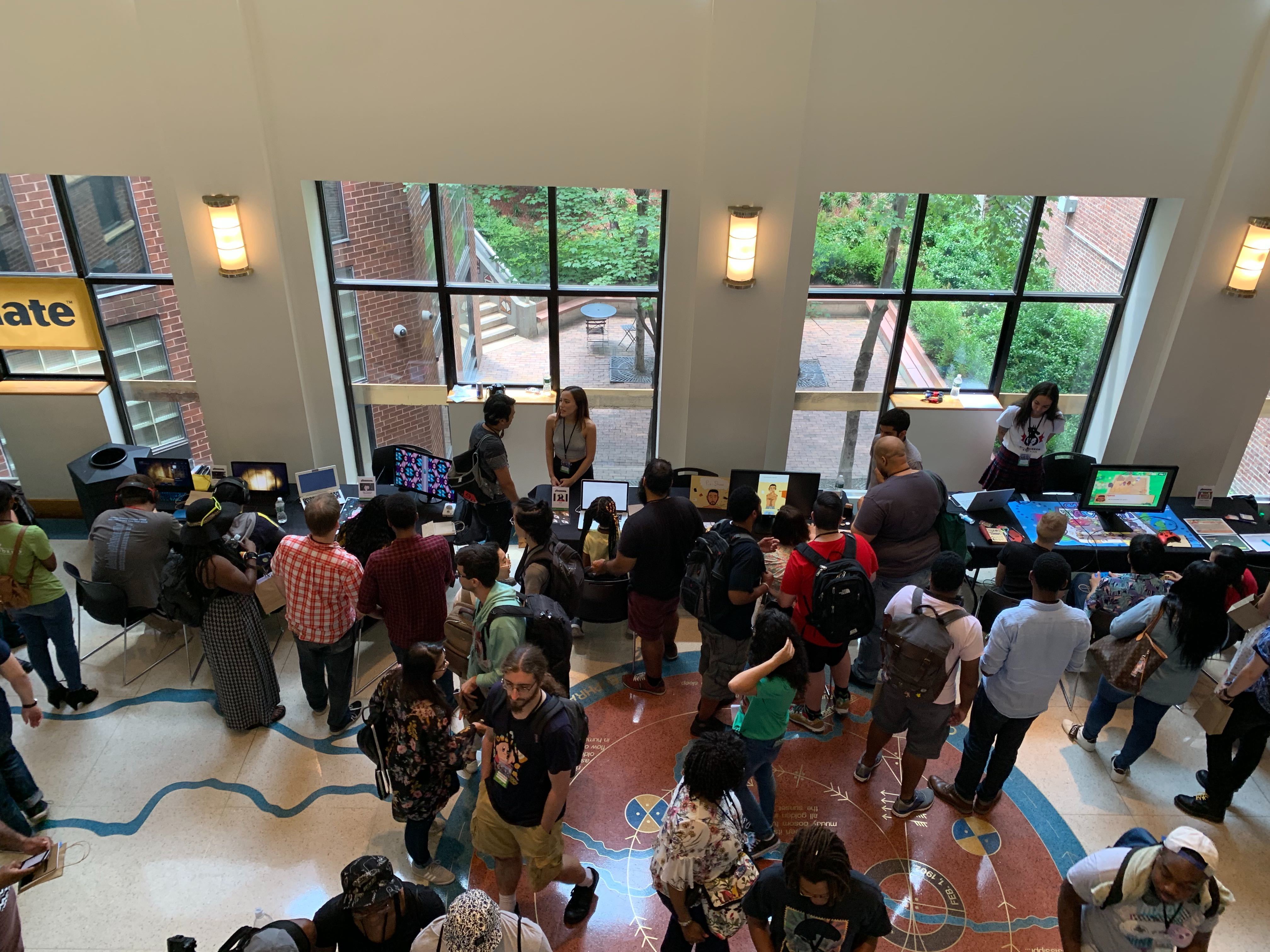 Editor's Note: Diversity and inclusion is an important beat for GameDaily as we continue to highlight, celebrate, and critique the ways that the game industry is moving toward a future where everyone has a seat at the proverbial table. We don't usually cover events on their own, but it's important to highlight GDoC's impact on the game industry for marginalized game creators.

The Game Developers of Color (GDoC) Expo is a conference that brings together a diverse crew of people of color who are working in the game industry in a number of different vocations. From the outset, it looks like a typical niche game industry conference, but as the day unfolded, it became a lot more than that. It was a gathering place for exchanging ideas that might not have been safe to say outside of the Schomburg Center for Research in Black Culture.

"Inclusion shouldn't be an add-on," GDoC organizer and director at The Sheep's Meow, Brian S. Chung, said to kick off the event. "It should be normal."

Chung's attention to that detail has enabled GDoC to continue to grow into one of the most accessible indie game conferences out there. Attendees can choose to pay anything from a full-price ticket, which is $20, all the way to, well, nothing. Chung's intention has been to create an event that should have almost no barrier to entry, so that game creators of color have the opportunity to attend, regardless of their financial circumstances. GDoC also offers free exhibition space for developers to showcase their games, in addition to providing tech to anyone that may need a portable demo space.

GDoC also provides travel assistance for developers who may need it, in addition to the technology provided for demoing (if necessary). Each of the talks and panels were streamed and subtitled live by a transcriptionist in the audience, providing even greater accessibility for disabled attendees and those that weren't able to make it into NYC for the event itself.

Even the sponsors were invited to come and share a few words about why their companies support GDoC and the importance of D&I throughout the game industry. Companies like Nintendo, Microsoft, and Niantic (who were three of the major sponsors at GDoC) took the stage to acknowledge GDoC's importance, while highlighting the staff that help move D&I ahead in their respective corporate cultures. The usual media-friendly lines were absent as each of the sponsors focused on being a part of the community that they'd come to support and it was incredibly refreshing.

Developers, artists, business owners, publishers, and indie developers in microtalks and panels to discuss everything from asset reuse (and what an asset flip actually is), being "ruthless" in your focus for following your dreams, and the importance of aligning creative vision with a solid business plan, among much more.

As a person who is not a visible minority, there are topics of conversation that I often don't have to think about. So a topic like "reuse everything," which Xalavier Nelson Jr. presented during the first microtalk of the day, is obvious to anyone who has a rudimentary computer science background. Object oriented programming is the root of any successful programmer's toolkit, regardless of language or use case. And any computer science professor worth their salt tells their students that the purpose of object oriented programming isn't just to organize and protect code -- it's to ensure that objects (whether they're variables, methods, functions, or classes) are able to be reused.

In game development, "reuse everything" tends to get developers and studios called out for "being lazy." But as Nelson posited, "We have a stigma in game culture; a toxic idea that reusing content, assets, ideas, and even concepts is somehow lazy or somehow less deserving of praise than something made... from scratch."

But asset reuse, which Nelson was careful to define as separate than an asset flip, is about more than just being efficient in studio and creative workflow. It's about acknowledging the disparity between a developer that can afford, and is therefore privileged enough, to create everything from scratch and the marginalized developer who has barely scraped enough money together to commission animation work. The time cost of original asset creation , especially for an indie developer working two jobs to fund their project, is prohibitive.

Work smarter, not harder. And, Nelson warned, "We as creators have to push against [consumer misconceptions] by intentionally reusing we make and buy to create better games, faster and cheaper."

Nelson isn't wrong, either, and any programmer would tell you that reusing everything is just the way things are done. Asking artists and designers to create original assets for everything completely dismissing that no programmer is creating the exact same object more than once. As my favorite computer science professor once told me, "Work smart, not hard, and get the job done. Clean it up as you go, but don't be afraid to get messy and make mistakes. As long as you contain your work in objects, the mess is, at the very least, contained."

Throughout the rest of the day, there were a number of other incredible conversations, including how to bring your values to the most unlikely places in AAA games. Aubrey Scott, who worked as a gameplay engineer on NASCAR games for a time, shared her experiences on how she called in her team (and key stakeholders) to devise a more robust, less binary character creation tool. She went into detail about the steps she took in order to get buy-in from key people working on the game, including the importance of identifying her team's values and "solve for them."

The real highlight panel of the day for me was the conversation between indie developers and indie publishers about "planning for the win." Sherri Smith, assistant managing editor at Tom's Guide, moderated a chat between Brandon Dixon (tabletop developer), Evva Kraikul (CEO and creative director at indie publisher, Glitch), Geneva Heyward (indie developer), and Kevin Zhang (co-founder of indie publisher, Serenity Forge). The developers and publishers talked about the games that inspired them, tips for using Kickstarter, marketing your brand on every social platform out there (yes, even Pinterest), how these publishers choose the devs they sign, lessons from indie development, regional development in Colorado and Minnesota, and, finally, the importance of aligning your creative work with your business.

"Ideally, when should you have a business plan?" Smith asks, spurring some of the most interesting business conversation of the day.

Both Kraikul and Zhang, as the publishers, immediately answered: "At the beginning." Dixon agreed and added, "I think one of the problems is we tend to of the business as the nasty side. And everyone thinks of creative as the nice side. ...Anybody can create something, but not everybody has money. If you're creative and you want to put something out there, you have to think of the business, because how are you going to pay your bills?"

The conversation went on remind developers that ensuring that your business helps define creative containers is the most important creative task to accomplish at the beginning of the project. Being able to create without worrying about where the money is going to come from is empowering, the panelists reminded the audience. Games are art, but they're commercial art and in order to make more games, money needs to be made.

The Game Developers of Color Expo is necessary. The spaces that it creates allowa marginalized developers to speak their truths and be real about the issues that matter to their communities. GDoC's accessibility is a key factor in softening the disparity between the "haves" and the "have nots" in the indie game space. Removing financial and technological barriers is just one of the many ways that conferences like GDoC and gamedev.world continue to lift up marginalized developers, no matter where, or whom, they might be.