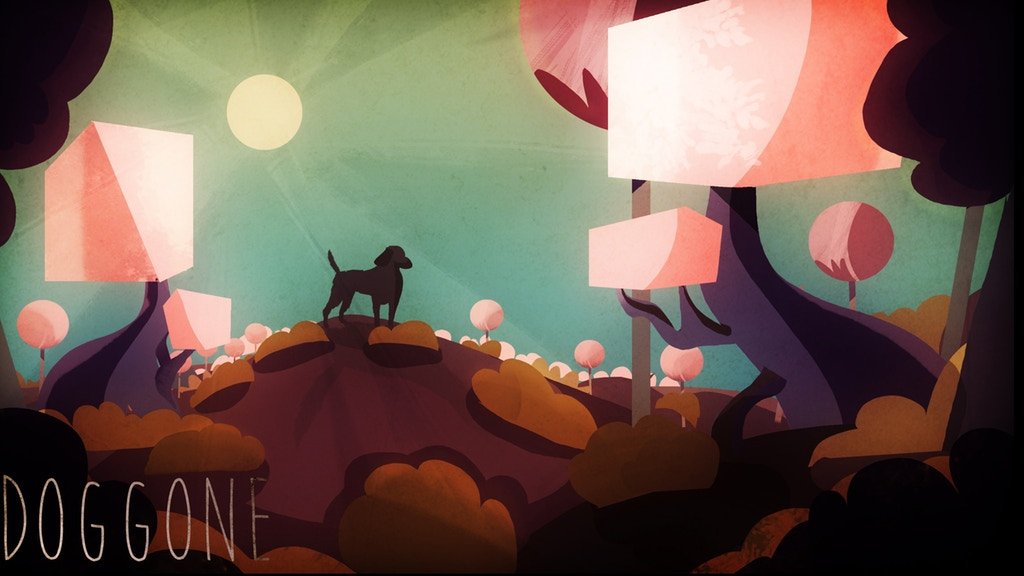 Nicholas LaBorde, Chief Storyteller at Raconteur Games, is a ball of vibrant Louisiana energy. It's the first thing that I noticed about him when we sat down to talk about the game that he and his team have been working on for the last couple of years. LaBorde's demeanor is exactly the kind of energy that people want and need in a leader, especially when they're working for prolonged periods of time on creative projects that may or may not succeed.

LaBorde and I talked about Raconteur Games, his approach to game development, and why he and his team are making a game about a lost dog.

"Can I pet the dog?" has become a common refrain among players. Most people love to interact with fluffy friends in their games, even in Fallout. In Raconteur Games' latest, Doggone, which is currently on Kickstarter, players must guide a lost dog home again. The team, led by LaBorde, was coming down off of Evangeline, a narrative-driven walking sim that encourages people to reach out to loved ones before it's too late.

"After we released Evangeline, we said 'What's next?'" LaBorde said earnestly. "And so with all this love in our hearts, feeling good, we said, 'We want to make a game about a dog.' And it's been a long journey."

The journey has taken a couple of years to get from its original concept, which publishers weren't interested in picking up in 2017, to what it has become today. When LaBorde went to pitch folks on the concept during GDC 2017, there wasn't much to go on. It was still too early and the team at Raconteur were still trying to figure out what this mystery dog game was going to be, let alone how it was going to play.

So, LaBorde shelved the project until the end of the year. They worked on other things, prototyped a few projects, but ultimately came back to "Project Rose" around December 2017. LaBorde approached his team and asked them what they thought, since he'd need their buy-in for a game that might be an uphill battle for it to find purchase in the turbulent indie space.

"I called every team member individually a couple of weeks later, right after the start of the new year," LaBorde said. "I was like, 'Look, we went through a lot the last time we did this. I just want to know if you are ready to go back to it emotionally and professionally because this is going to be another uphill battle, I think, but I think it's something special.' And everyone said yes before I could even finish my emotional little speech."

So, Raconteur got back to it. The distributed team began to pour their hearts into finding Project Rose's style, first. They started with Abdullah Kassem, a freelance illustrator and artist. Kassem eventually would become the art director on Doggone and define its minimalist, Eyvind Earle art style.

"From that first art test we were like, 'Wow, let's go for it,'" LaBorde noted. "So over the course of 2018 and early this year, we went at a slow pace and tinkered and fiddled and put some stuff together. And then once we were confident with the art style, we said, 'Okay, let's make a vertical slice of the pitch to publishers. Let's talk to the money folks. Let's see if we get any investors to pitch it. Let's just see what's out there.' So I go back to GDC [this year]. I'm meeting folks for a game about a lost dog. The déjà vu was strong the whole time. I was like, 'I did this two year ago. Will it be different?'

"I ended up getting about eight or nine publisher meetings and all of them were partners I considered to be dream partners. They're quote like the absolute best people I would pick from the bottom of my heart to work with. And ultimately we did not strike a deal and it was still a great experience, though. I got in the room with EA. I got in the room with Xbox. We got good attention. We got even more attention and progress on these types of meetings than we did the first time. So we were like, 'Okay, that's better. We're getting somewhere. There's something here.'"

Indie development, regardless of where you're stationed or how you fund your project, is an uphill battle. Budgets will almost always be tight. Deadlines can slip. The best planned projects can fall apart at any time for any reason and there's not much you can do but stop the bleeding. It isn't very often that you hear about indie studios looking back to move forward, as Raconteur did with Doggone. Indies are like sharks -- if they don't keep moving forward, the loss of momentum is enough to cause long-term harm and even studio closure.

LaBorde's infectious energy and passion is not only part of how he's helped guide his team through the ups and downs of game development, but it's contributed to his connections with the industry's biggest names.

At first blush, you wouldn't think that Phil Spencer would give indie developers the time of day. (That's what Chris Charla and his team at ID@Xbox is for, after all.) Then again, given how down to earth the man appears to be… maybe it isn't all that surprising after all. But LaBorde thought it was worth a shot.

"Back when I first launched our first game, I sent a message to Phil when we were in Early Access," LaBorde said enthusiastically, "and I was like, 'Hey, Phil. I think you're a force for good in gaming. I think you're doing great stuff for not only Xbox, but gamers in the whole industry. Thanks for what you do. I'm just a little indie developer in Louisiana. I know you probably won't even have enough time to read this, but if you do, we're making the schmup, blah, blah, blah.' And he actually responded a week later and he was like, 'Hey, Nick. Tried your demo. I think you've got a cool concept,' gave me some feedback. And he's like, "It was really cool. Need to play more.'"

Spencer's soundbite eventually made its way onto Close Order's Steam page, attributed with permission. LaBorde laughed when I asked him if people believe that it's from the Xbox boss, because a lot of the time… they don't. But LaBorde just shrugs it off. He knows that if he faked a quote from one of the most important people in the game industry that no one would trust him again.

Over time, LaBorde has built up a significant amount of trust with Xbox through a considerable amount of time and genuine networking. Networking is one of the things that indie devs seem to be the least comfortable with, especially if they're shy. From talking to LaBorde about his approach, which is through distinctly southern "food is the way to a person's heart" sincerity, it's apparent that he was brought up to share everything he has with the people around him, regardless of who they are or what they may bring to the table.

LaBorde took a couple of holiday seasons after that GDC to send out Louisiana crawfish bread to the Xbox team. Sure, it's good to send reminders of your existence to the people you want to work with the most, but it was more than that for LaBorde. It was sharing the food that he'd grown up on with people that he genuinely liked and appreciated. And that level of genuine care is something that can't be faked.

When it came time to sit down and talk about Doggone with the Xbox team, it was at an ID@Xbox event in Austin, Texas earlier this year. LaBorde knew it would be a 7-hour drive from his home in Louisiana, but Raconteur is getting ready to bring Evangeline to Xbox One, so it was important to get some face time with the team before the launch.

"Back in February, ID@Xbox did a developer day in Austin, Texas... And I thought, 'Oh, they've got stuff about certification, which I heard nothing about.' I think it will be worth it just to go, get in the pits, meet the team, all that stuff."

After showing the team the game, LaBorde was feeling pretty good about what he and his team were creating. Later in the year, during GDC, Spencer waved LaBorde over to say hello and take a few minutes to get caught up. (After a quick thank you for all of the crawfish bread.) LaBorde mentioned that Raconteur was working on a new game about a lost dog. Spencer insisted that he see the demo right then and there.

"He just motions to the seat next to him," LaBorde began, "and he goes, 'Great, I want to see it.' To which the only answer is, 'Sure!' So I pull out my laptop and I show him the demo. And he asks so many thoughtful questions. And so we go through the demo and he keeps asking questions. Then we get to the end and the end is kind of like an ominous, spooky moment where it's like all these birds appear in the sky and it's shadows following you and the music is really intense and it cuts the black.

"And I say something like, 'Well, it's not always going to be sunshine and rainbows.' And he just turns to me with [an] extremely serious face. ...This is the face he uses when he tells Satya Nadella, 'I need a billion dollars for the new Xbox.' This is a serious thing. And he says, 'Is this going to be like Old Yeller? Because I can't do that again.'"

Doggone is, in fact, not going to be like Old Yeller, which means that Spencer can rest easy and I can go into the game knowing that I'm going to lead a lost dog back to his loving family. I can handle a Homeward Bound kind of game, knowing that the journey (much like the game's development) is going to be hard, but the payoff is going to be happy. Not so much if the game ends up being tragic.

Raconteur Games may not have reached its Dead Cells or Celeste moment yet, but a rarified few find that level of success, even if their games cut through the discoverability noise. What the studio does have (in large part due to LaBorde’s leadership) is a sense of wonder and excitement in each step of a sometimes heartbreaking process. There are no guarantees in game development, especially for indies, but what LaBorde demonstrates is that the connections built throughout the course of the journey are what will stand the test of time.