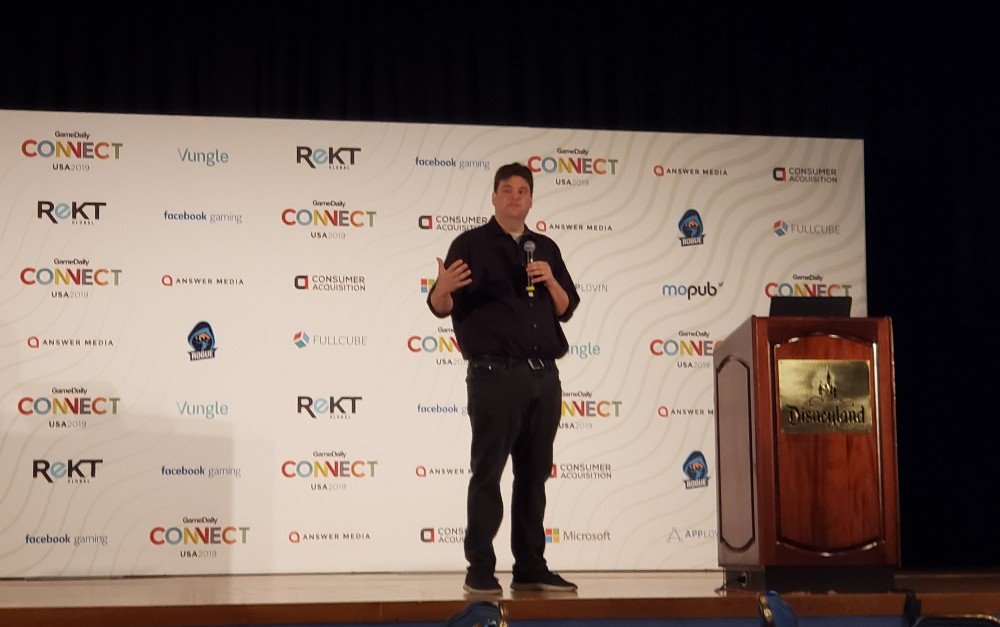 “We keep making the same mistakes over and over again,” Aaron Loeb, President of Studios at FoxNext Games, said near the beginning of his talk at GameDaily Connect USA this morning. Loeb wasn’t referring to his company but the sector of the industry that has repeatedly tried to cash in on valuable brands and Hollywood IPs.

FoxNext Games was born from the studio Aftershock (which was spun off from Kabam while the rest of the mobile firm was purchased by Netmarble) in combination with acquisitions like FogBank and Cold Iron Studios. Loeb noted that Fox had been wanting to get into internal development and publishing and so FoxNext Games was formed with “the ambition to build a third pillar” at Fox alongside TV and film. This was a learning experience for both Fox and Loeb. The former had absolutely zero publishing staff or history to lean on, and no catalogue sales to bolster the bottom line, but they had patience and flexibility.

Loeb quickly learned that Fox actually recognized the value of games and did not look at games as merchandise. They did not seek to leverage games to promote the “real IP,” he said, because “games as part of IP are incredibly powerful when they transcend merch.” They should not be seen as a “downshift” from film and TV. “Creative businesses are not one you downshift into,” Loeb stressed. That’s a lesson that Fox took to heart that many other companies in the space over the years have failed to heed.

Another critical lesson is an appreciation for talent. “Creative talent is actually at the center of the business,” Loeb noted. “Hiring great people who know how to create great product is the most important thing. Fox is the company that had James Cameron and went all-in despite going over budget.”

That willingness to invest in people is something the games business could do better at, Loeb said candidly.

“Treat your great game creators like great film and TV creators,” he said. “How often do you think of the head designer of a game and the way they should be treated being similar to the way someone might treat James Cameron? I think we pay lip service to that as an industry, but it turns out we rarely do it.

“We constantly are talking about the endemic problem with crunch in our industry and the way that people run studios. Those are things that happen because we haven't embraced the fact that somebody who's really, really good at creating a video game is very rare and deserves to be treated incredibly well, and they will eventually find the people who treat them incredibly well and work with them rather than with you if you don't treat them very well.”

For FoxNext, while there’s no universal anti-crunch policy, in a Q&A session following Loeb’s presentation, he made it abundantly clear that the company strives to ensure that quality of life is a priority.

“The way that we are structured is very much studio-centric, so our publishing group sits on the outside of the studios but all of our business is there to bolster and support the studios. The studios are extremely independent, so they each have their own policy, so we don't have a universal no-crunch policy [but] each of the studios has a very firm anti-crunch policy,” Loeb explained.

Loeb remarked that the live service games era we’re now in can exacerbate the crunch problem that plagues so many game studios.

“When you're in game services there isn't a [feeling], ‘We've crunched like crazy and now let's all go on vacation to Bali.’ You're never done. It is ongoing,” he continued. “One of my favorite books is Sleepless in Hollywood, and in it, the author talks about when she moved from film to television, and she ran into a friend. She says I'm going to start making TV, and he says, 'Oh, welcome to the tube!' 'When you get a showrunner job on a network television show, you enter into a tube, and you don't have time for anything, your family, your life, you're just running through that tube as fast as you can until either you're fired or the show is canceled, so welcome!'”

The constant need to support game services can make it feel like that so-called tube.

“You're just always running forward. So if you're crunching, if you're not creating for your team the ability to have life outside the doors of your office, people are going to just collapse,” Loeb warned. “It's just not tenable. And so all of our studios have a really firm... we do everything we can to avoid crunch and when there is crunch we do everything we can to quickly ameliorate it so that people can rest.”

Having an appreciation for talent is critical, but Loeb also stressed that having both the right idea and the right talent at the same time is paramount. Having one without the other automatically leads to failure. He said there’s far too much “wishful thinking” from people in the industry who think they can get by with just one or the other. Giving the talent on your team the wiggle room to come up with a great idea is another huge component. And that means avoiding complicating matters by throwing fear into the mix.

“Another important lesson we learned from our Hollywood pals that I now try to internalize everyday is that as a creative executive, as somebody whose job it is to invest in somebody making something, your fear is not useful,” Loeb said. “Your fear does not serve the creative people one little bit.”

He acknowledged that creatives often have their own fears already, and that’s more than enough for them to deal with.

“Is your mental state when you're creating something of constant confidence and feeling like everything's great? Creative people are constantly worried,” Loeb continued. “They're like, 'Oh, this game sucks, everybody hates me, it's a disaster.' Then you pile on top of that -- and let's be frank the video game industry is full of this -- creative executives are like, 'Yeah I think the audience is going to hate your game and they probably think you're stupid too.' Their entire creative exercise is one of compounding fear. Well, nothing great comes from that environment.

“From over a 100 years of making film and television, this is something Fox has baked into its bones. Being an executive and flipping your fear onto people is worse than useless, it is damaging.”

With the right mix of talent and backing from executives, FoxNext was able to enjoy great success with its first game, Marvel: Strike Force, which has seen over 22 million installs and revenue of more than $175 million. Moreover, 60% of daily active users play every day, which is enormous. “We have a daily connection with Marvel fans. We talk to them everyday,” Loeb noted.

This was all possible because Fox took a great IP and a great idea and went all-in. Not only did Fox back the game fully, but the company thought about how to integrate it with its overall strategy. Fox leaned into its strengths in marketing and promoted both the Deadpool Blu-ray and the game in the same commercial -- and it actually worked out better for both properties.

“Lean into your strengths, but don’t run away from risks. Stick with the stuff you know really well, but be really ambitious. If you’ve got great talent and you’ve got a great idea, have them make the biggest, most ambitious thing you know they can do. Hollywood is really good at this. When it’s great, go all in,” Loeb said.

As the industry heads more and more into a platform agnostic era, fueled in part by the rise of the cloud, devices will matter less and less. The divisions, Loeb said, will come from the business models.

“A lot of the time our industry gets fixated on platform rather than recognizing business model,” Loeb added. “This is, I think, one of the most interesting things I've learned from Fox. They have a very firm division between television and film. Those are two different divisions. Television is serialized. It's like our services, and they think of it being cut by business models... They don't think the screen is what the most important thing is. They think about it as the model of generating content and how the business works is what divides the business. So I think we're going to increasingly see in our industry a division between services...rather than based on platform.”