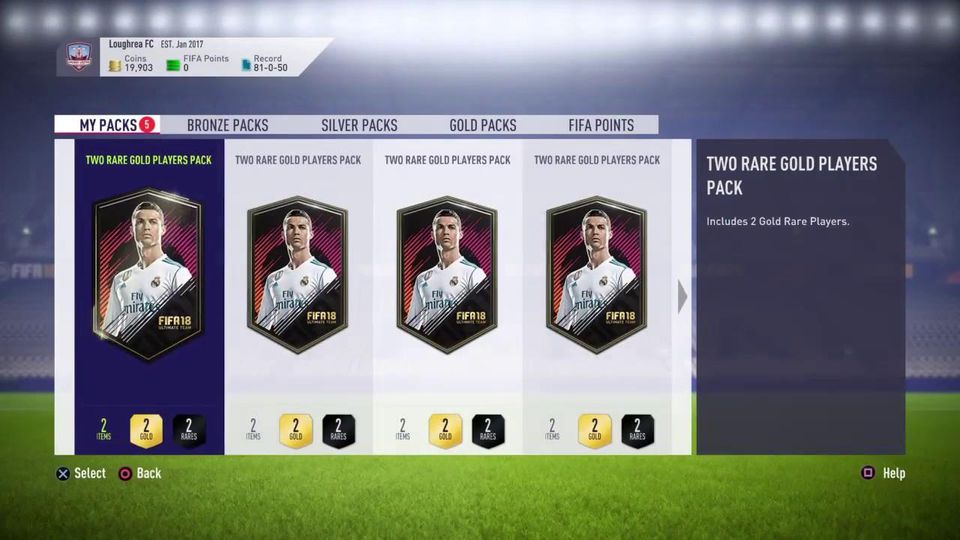 Loot boxes are once again coming under scrutiny overseas, as the Digital, Culture, Media and Sport (DCMS) Committee in the UK, after months of research, has now recommended to the British government that it fully regulate loot boxes under gambling law. The wide-ranging report (which you can read here) was not laser focused on loot boxes, but the hot-button topic came up as part of the larger look at “immersive and addictive technologies,” which touches on the WHO’s gaming disorder, cyber-bullying and social media, VR, age ratings, free-to-play mechanics, and much more.

The DCMS Committee’s inquiry included testimony from the likes of Epic Games, Snapchat and Instagram, and as the committee states, “We intend for this report to inform understanding of, and the debate around, those technologies as the Government introduces a new regulatory framework to tackle online harms. Whilst we recognise that the vast majority of people gain pleasure from social media and online gaming, we must balance that against the potential harms that can occur.”

Under its recommendations section in the report, the DCMS Committee specifically states that “loot boxes that contain the element of chance should not be sold to children playing games, and instead in-game credits should be earned through rewards won through playing the games.” Moreover, while noting that loot boxes are “integral” to major companies’ revenues, they advise that the UK’s PEGI age ratings system should incorporate a “gambling” label and that loot boxes should be regulated by the government.

“The Government should bring forward regulations under section 6 of the Gambling Act 2005 in the next parliamentary session to specify that loot boxes are a game of chance,” the report states. “If it determines not to regulate loot boxes under the Act at this time, the Government should produce a paper clearly stating the reasons why it does not consider loot boxes paid for with real-world currency to be a game of chance played for money’s worth.”

Following the report, UK games trade body Ukie quickly responded. Ukie CEO Dr. Jo Twist stated, “The video games industry has always, and will continue to, put the welfare of players at the heart of what we do. We will review these recommendations with utmost seriousness and consult with the industry on how we demonstrate further our commitment to player safety - especially concerning minors and vulnerable people.” (You can read the full statement here.)

Numerous countries around the world have been investigating loot boxes, but only Belgium and the Netherlands so far have legally declared them to be gambling. EA’s FIFA Ultimate Team has been one of the top games affected by these rulings, and indeed FIFA was one of the games highlighted in the DCMS report. The DCMS even points to Belgium as an example of regulatory framework.

“The experiences of other regulators... indicates what could happen if loot boxes were determined to be gambling under UK law. We heard that if legislation was changed, any games company using loot boxes would need to obtain an operating licence, which are accompanied by a range of regulations around transparency, duty of care and age restrictions,” the DCMS notes, adding that the likely outcome would probably be complete removal of loot box mechanics instead.

The report cites EA VP of legal and government affairs, Kerry Hopkins, who claims that EA’s loot box implementation in FIFA has been “quite ethical and quite fun.” The DCMS Committee immediately countered that notion, saying, “This is noticeably out of step with the attitude of many of the gamers who contacted us following our evidence session, including those who vehemently rejected her characterisation of packs not as loot boxes but as ‘surprise mechanics’.”

For its part, when contacted by GameDaily, an EA spokesperson commented, “We have reviewed and are closely considering the findings of the DCMS Committee report. While we don’t agree with all of the conclusions and recommendations in the report, we do take our responsibilities to players of all ages very seriously.

“We have an ongoing commitment to player safety and well-being whenever they are playing our games or engaging in our communities. We will continue to look at how we can contribute to productive research and solutions for the topics raised in this report, and we look forward to continuing our ongoing dialogue with the UK government.”

There’s no doubt that loot boxes have become a highly attractive and lucrative mechanic for big game companies. The DCMS Committee notes that, “In 2016, EA’s CFO Blake Jorgensen told investors that the Ultimate Team mode accounted for roughly half of the $1.3 billion the company makes from extra digital content.”

EA itself has had a complicated relationship with loot boxes, at times embracing the mechanic but also distancing itself from them (especially in BioWare games) after the tremendous backlash the company suffered for loot boxes in Battlefront II. In our exclusive E3 2019 interview with EA CEO Andrew Wilson, the executive was upfront about the loot box controversy.

“We want to talk to a lot of regulators around the world. There's no sleight of hand here,” he said. “If it's ultimately found that any form of monetization is inappropriate, we'll do something different. Many territories and many regulators have tested it and found it to be completely fine in the same way that collecting baseball cards or KISS cards is fine. So, what we did last year ahead of, I think, anyone in the industry is we went out, and we started providing odds and being very transparent about the chances that you're going to get whatever it might be in any one of these packs. We're going to continue to do that because our objective was never to be opaque.”

There’s been more of an effort by larger game companies lately to start disclosing the odds. At GameDaily Connect USA, Rogue Games CEO Mike DeLaet said that Apple in particular has been great at making developers disclose their odds on loot boxes. And while that’s a step in the right direction, the DCMS Committee points out that even with knowledge of the odds, it’s still a form of gambling that they believe should be regulated.

So where does this leave major game companies that do rely on loot boxes for big revenues? For now, in most countries, EA, Blizzard and others can keep doing as they please. As Peter Lewin, Senior Associate with UK law firm Purewal and Partners, commented to GameDaily, “The DCMS recommendations don’t carry legal authority, so nothing is legally different today than it was yesterday. Loot boxes aren’t suddenly illegal and neither is letting children play games.”

That said, perception around games and loot boxes is half the battle, and the DCMS report may be enough to swing the tide towards eventual regulation.

“[The report] could however represent the start of potentially significant shifts in UK games industry regulation on issues ranging from gambling to data protection,” Lewin said. “On the gambling front specifically, the DCMS has recommended that existing UK gambling laws be modified to explicitly classify loot boxes as ‘games of chance’ and therefore regulated gambling activities. This is because the UK’s Gambling Commission has taken a fairly nuanced approach towards interpreting UK gambling laws to-date and generally held that loot boxes don’t meet this strict legal test. If the DCMS recommendation was to be implemented then it’s possible we would see loot box mechanics or potentially even entire games pulled from the UK market, as has already happened in other countries, in order for companies to avoid gambling regulation complexities.

“Will the UK government follow the DCMS’s recommendations here? Honestly, it could go either way. On the one hand, the UK government has been largely content with letting entertainment industries self-regulate to-date. On the other, it is already making sweeping moves around the protection of vulnerable individuals online and it’s not impossible to see games getting swept into this. On top of this though, it’s important to remember the wider ongoing political situation in the UK. We currently have a frozen parliament which won’t have a solid legislative agenda for months and it’s possible that any legislative changes around issues such as modifying historic gambling laws could be forced to take a back seat, at least for now.”

There is also a possibility that the very act of the UK shining a spotlight on loot boxes could influence other countries to take action as well.

“UK policy has certainly been influential outside its own borders historically,” Lewin remarked. “Regarding loot boxes specifically though, we’re seeing an incredibly fragmented landscape develop. This is despite regulators from 15 European countries coming together at the end of 2018 to release a joint statement indicating a sort of collaborative front on the matter. Gambling is an issue where tolerance varies so strongly country-to-country [and] state-to-state, that I expect this fragmentation to remain in the foreseeable future.”

Brandon J. Huffman, attorney with Odin Law and Media, agrees that there is the possibility of the UK’s focus on loot boxes impacting the mindset of other countries.

“Every time a country passes some regulation, it enables legislators in other countries to say, ‘Look, we are behind’ or ‘This is important, look what they are doing!’ In the U.S., several states and at least a few federal legislators have been paying attention. Some horrible bills have been proposed. The only way to keep those horrible bills from becoming law is to assuage concerns, propose better ones or self-regulate. Assuaging concerns could be done through responsible practices and PR, but I think we are past that,” he told us.

Self-regulation may be the key for the industry in this battle. “Many of us in the game law world have been calling for this for years,” Huffman said.

We’ve already seen some companiesremove loot boxes in certain titles, but if the industry truly wants to avoid government intervention (which could be a slippery slope for other kinds of game regulation), then it needs to act now.

Just as fears over the impact of game violence in titles like Mortal Kombat directly caused the industry to come together and create the Entertainment Software Rating Board in the early ‘90s, the growing chorus of loot box complaints must be heeded. It’s time for the ostrich to remove its head from the sand.

[Update 9/13/2019] The Entertainment Software Association (ESA) here in America has now responded to the DCMS Committee's recommendations as well. The ESA, as reported by GamesIndustry.biz, has said that it "strongly disagrees" with the DCMS report.

"We take seriously the issues raised in the UK Parliament's Digital, Culture, Media and Sport Committee report, but strongly disagree with its findings," a representative with the ESA stated. "As demonstrated by the recent announcement of policies regarding the disclosure of the relative rarity or probability of obtaining virtual items in paid loot boxes as well as the robust parental controls that empower parents to control in-game purchases, the video game industry is a leader in partnering with parents and players to create enjoyable video game experiences. In addition, numerous regulatory bodies around the world, including those in Australia, France, Ireland, Germany, and the UK, have come to a conclusion starkly different than that of this committee."