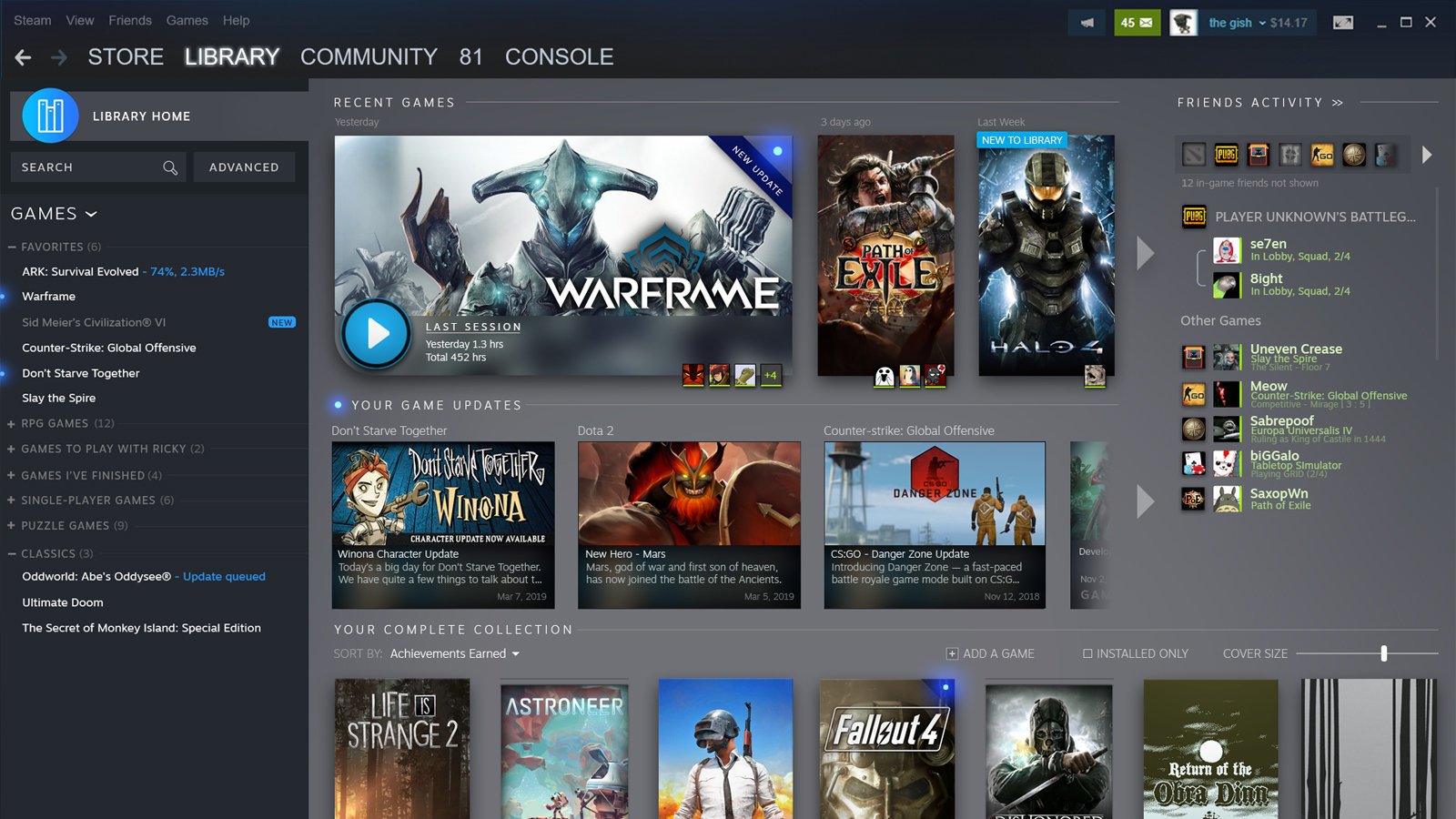 The UFC Que Choisir (a French union for consumers) declared a victory today in its years-long fight with Valve. The District Court of Paris has granted consumers the right to resell their games purchased on Valve’s Steam platform. The news was first discovered and translated on Reddit, and indicates that Valve’s Steam Subscriber Agreement doesn’t hold water in France.

Specifically, Valve’s terms have always defined digital purchases on Steam as subscriptions for content and services, and as Next Inpact detailed, the court ruled that Steam does not, in fact, sell subscriptions. As such, digital games (what they’re calling in the ruling “dematerialized” games) can be resold just as any physical product, the court said.

UFC Que Choisir has been pushing hard for this ruling since 2015, and the union intends to bring the fight to other platforms as well. Valve is highly likely to appeal this ruling, but if the verdict holds the company has one month to comply with this request; if it does not, it will be subject to a daily penalty of 3,000 euros, for a maximum of six months.

While a verdict against Valve would set precedent, there’s no guarantee that’s going to happen and it doesn’t mean that this sort of legislative approach would spread beyond France.

There’s understandably some concern in the development community. Vlambeer’s Rami Ismail remarked that it could be a “massive ruling” that affects “what games get made and how.” However, digital entertainment lawyer Jas Purewal of Purewal & Partners responded on Twitter, ”Let's not go overboard. EU and US law is all over place. In 2012, there was an EU case which wanted to permit digital resale but didn't, cases since then went [the] other way. EU has had chances to make this legislation, [but] didn't. Maybe we'll see future change, unsure this is it yet.”

Purewal then added that the issue of second-hand digital marketplaces is actually in Europe’s highest court right now, and he said that it’s expected to rule against digital resale.

Drilling down into the ruling, Richard Hoeg, attorney at Hoeg Law, explained to GameDaily that the French court seems to have “adopted a kind of ‘first sale doctrine’ for digital products."

“Stated simply, that doctrine says that when a person buys a copyrighted work, they have the right to sell the instance of the right that they purchased (and do other things like display it). It’s why you can sell a book and not run afoul of copyright laws that give the right to sell solely to the copyright holder,” he explained. “Such a doctrine has not traditionally been applied to the digital space, because the conveyance of digital goods is all done by contract (i.e., that EULA or Terms of Service box users click through) and not solely as a function of copyright.

“Said another way, if you went to a book store and as part of purchasing a book from that store entered into a contract in which you agreed not to resell the book, that prohibition would generally be enforced regardless of First Sale Doctrine, because you individually have agreed to further prohibitions.”

Hoeg added that while he completely disagrees with the court ruling, “publishers and platforms are going to have to take it seriously.”

On the chance that a final verdict is in favor of UFC Que Choisir, it’s going to be very interesting to see how the rest of Europe and the global games industry reacts to the news.

“The difficulty here is that if sale is permitted in France it becomes difficult to see how the ‘garden can be walled’ to exist solely in France when we are ultimately talking about 1s and 0s,” Hoeg said. “It might just be the case that digital providers ‘cut off’ France so as to not have to deal with this (and to, effectively, ‘encourage’ other jurisdictions not to follow suit.)”

The latter scenario could be how many developers and publishers react, which would certainly have an impact on France’s game market, the seventh largest in the world, worth about $3.1 billion, according to Newzoo. In his initial Twitter reaction, Ismail commented, “If this stays localized to France, I'm honestly not sure if digital storefronts will find it worthwhile to stay in France. Having to create & moderate that ecosystem in such a way that it stays localized to France sounds like a ton of work for what is no gain to Valve or devs?”

For game developers, the fight against digital resale has been going on for years, particularly in light of controversial grey market reseller G2A, which has cost developers hundreds of thousands of dollars in lost revenues. Some developers even advocated that people pirate their games rather than buy a key from G2A.

If any player can quickly buy and resell a digital copy of a game (which, unlike used physical discs, would be no different than new), how are developers going to manage what could be an economic crisis?

“If the ruling is indeed that game platforms are obliged to allow resale, for indies, it's hard to predict what the fallout would be. It's not like our games were particularly DRM'ed or otherwise protected - so chances are that people are buying them because it's both convenient and they like our work. The hypothetical situation would definitely impact our bottom line, and will do more so for developers of short or singular experiences. Infinite experiences, like roguelikes or multiplayer games, suddenly become a lot more attractive.”

Hoeg agreed that this sort of mindset from the court, if adopted, would cause a “massive resource shift” towards games-as-a-service. “[We might see] the return of the ‘access pass’ concept from when publishers were trying to stymie the physical resale market,” he continued. “You might even see secondary systems imposed where you have to login to an account and it is that account that has access to products on a monthly (or other) basis rather than your having any claim to ownership. Obviously, that outcome would be less than ideal even for those that might otherwise be in favor of being able to sell their digital games.”

Ownership is a key word in this case. Ironically, while UFC Que Choisir has positioned this a win for consumers, the industry’s reaction to the ruling may take away any semblance of ownership in digital gaming. As one commenter on the Reddit thread observed, a world where players have to stream and subscribe to all their games is “the ultimate form of DRM.”

There are some in the industry who would love to see consumers granted the right to resell their digital games, especially those in the blockchain business. Blockchain has had a mixed reception from game companies thus far, but the fledgling decentralized ledger technology could be the answer for both consumers and game makers, the team at Robot Cache believes. InXile boss Brian Fargo announced the blockchain-based storefront last year, stressing that it would only take a 5% cut of sales.

In an email to GameDaily, Robot Cache CEO Lee Jacobson remarked, “We've always felt that gamers should be able to resale their games when they are done playing and we built Robot Cache for that exact thing. Our model allows developers to participate in that revenue making it a win-win. The ruling in France says it should be a consumer right, and we agree that gamers should be able to monetize their library, not just in France but everywhere. We’ve found a clever way to solve for this, and in fact it’s live and working in our closed beta... We are seeing gamers buying and reselling digital PC games from their library. There is no other platform that allows this to happen.

“We figured out that by using blockchain technology we could give gamers the power to resale games. Blockchain technology acts like a ledger system, it tracks all transactions on the chain. All games have an unalterable code. This code provides proof of ownership, and this means, gamers are able to resale games from their library. When they resale a game, they transfer the digital rights of the game to another gamer. Our goal at Robot Cache is to allow publishers and developers to keep significantly more revenue than other distribution platforms, and to give gamers, for the first time ever, the ability to resell their digital games.”

Blockchain aside, there’s another important facet to the second-hand digital game sales issue, and it’s one that’s proven highly controversial on its own: loot boxes. Hoeg explained that a legal digital resale market would pose yet another hurdle for purveyors of loot boxes to overcome.

“It would significantly change the loot box/gambling mechanics discussion,” he said. “Right now, the industry is hanging on to the fact that loot boxes cannot be considered gambling because what pops out of them cannot have value (by EULA and by contract). If the First Sales Doctrine is applied to digital goods entirely, whatever comes out of a loot box would likely need to be transferable and the existence of a secondary market becomes all the harder to deny. With a known, public secondary market, it becomes very difficult to argue that purchasing and opening such ‘surprise mechanics’ does not have value for ‘money or money’s worth.’ I think if anything, that’s where I would focus my attention were I a big publisher or the ESA.”

With digital sales becoming the dominant form of game purchases (2018 was the most profitable year for digital yet) and traditional brick-and-mortar game retailers dying off, the discussion around digital resale is likely to continue for some time. Game companies must be prepared to pivot and adapt depending on how the laws swing.