Women in Games 2019: 'Your voice matters, and your imagination matters' 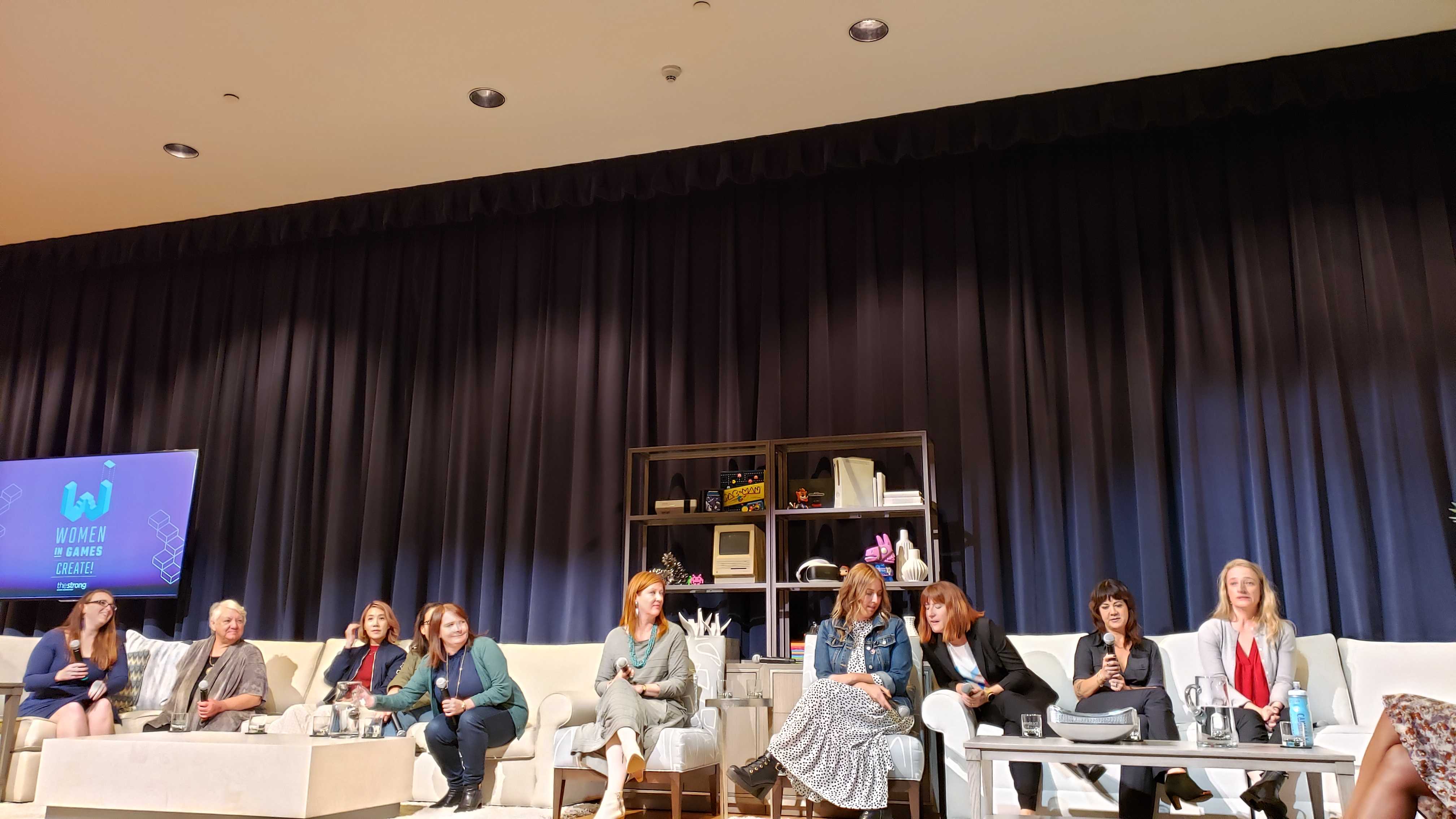 With the theme of “create” for this year’s event, the women who spoke described the challenge that comes with not only creating works of art in general, but the genuine need to create a positive space to make games, one that welcomes women and encourages them to stay.

Hunicke, who ended up speaking last and discussed spearheading both the rise of indie game jams and game design degree programs, gave credit to women all across the industry for helping to play a major part in the evolution that the business has seen so far in its 40 years. “Every single woman that has been up on this stage talking to you tonight has had a hand in making change happen,” she stressed.

She also offered a summary of some of the talks that came before hers: “Creativity is messy, but trust over time gets you through almost anything. Our job is really fun, but we only ever stop because we have deadlines. To create you need to be okay with failures. Hard, frustrating and scary is a necessary part of making your dreams a reality, but it is easier if you lead well and create an environment of psychological safety, listen to the feedback that you get and lead with a vision.”

Chew talked about how the game creation process on Spider-Man (and in general) was quite messy. Teams need to actively work on improving teamwork and building trust, she said.

Greer followed by explaining the importance of failure and psychological safety for employees. She cited her own biggest regret in not signing a deal with Minecraft back in 2009.

“I said no to Minecraft in 2009, something I put in a deck, [and] this was the biggest mistake as CEO I could have possibly made,” she said. “You can’t screw up worse than I did. Don’t be afraid of mistakes or to call them out... Give the team full context on decisions. Treat everyone with respect. How can anyone feel safe if they see people torn down?”

For Wolfkill, creating that safe space is vital. She reminisced about leaving her artist side behind as her career took her in more managerial directions, but she said that she can still create by helping others.

“When I moved into an executive producer position, it was about creating a framework for other creatives to do their best work. My validation came from the collective success of others and teams, [and] creating space for risks to be taken, telling more inclusive stories. Creating space for others is a gift and is something we can all do,” she remarked.

As Hunicke reminded us, the process of creating can also connect the creator with wider communities, and creation has the power to impact generations, as LaPensée described while going into detail on her Thunderbird Strike project (a controversial game that rankled the oil industry and led to both praise and death threats).

“The voices that come through us in this creativity are not ours, they are from those who came before us and they are intended for those who come after us,” said LaPensée.

McCormick also shared the importance of identifying limits in creation. She pointed to the numerous, but limited patterns we see so often repeated across natural phenomena (spherical structures, honeycombs, helixes, etc) and noted how understanding limits can help inform creation. And as someone who’s made educational games for children her whole career, that’s helped her to understand how to approach children’s understanding as well. The goal, she said, should be to use creative skills to educate the next generation.

“One child in three will never learn to read at the 6th grade level. We can create a video game solution,” she said.

For Oneal, like Wolfkill, as an executive the creative process can mean something different, but it’s at that top level where hugely important decisions about representation can be made. Oneal described the opportunity her studio got to recreate the Crash Bandicoot franchise, and in one important cut-scene, she decided to replace the damsel in distress trope with a character who has agency and stands up for herself. “When we think about creating games we have to think about our audience, all of them, give them experiences they want to have and tell them stories they want to hear,” she said.

Representation is critical, and it’s something that matters just as much in the events space. Scavio was previously the director of the Game Developers Conference and now she oversees the D.I.C.E. Summit as AIAS President. She may not be creating games, but she’s trying her hardest to create environments where women and people from all walks of life can feel safe and talk about their game creation process. Notably, Scavio led the changes at GDC to install a daycare, so new moms could feel comfortable attending, and she introduced ribbons for people who felt it was important to highlight what pronoun identification was appropriate for them.

“As an industry, we need to decide to change this and I’m in a unique position to put in the work to change this. I want to put people on the stage to talk about the games they make and not how they’re underrepresented in the industry,” she remarked. “Change takes effort. I want to create a space where it feels effortless.”

Santiago’s talk was one of the more entertaining, as it felt like a comedy roast. Rather than talk at length about her own creative mindset, she deliberately highlighted some of the stupidest and offensive criticism that some of the women on stage had been subjected to over the years. The audience may have been laughing, but the impromptu roast was done for a very deliberate reason: women in games are constantly fending off complete jerks. “Always remember that we’ve all felt that criticism, we’ve got your back,” Santiago said.

“The vulnerability is necessary and it is real. Even in the face of incredibly unconstructive feedback. i.e. Haters hate us because they ain't us,” added Hunicke (who worked with Santiago at thatgamecompany).

The themes of representation and inclusion were at the forefront in the audience Q&A that followed as well. When asked how to empower the next generation of women, Hunicke answered simply, “By giving them money.” Under-capitalization for women is a problem that continues to plague the game industry, as was noted at last year’s event by Second Avenue Learning’s Victoria Van Voorhis. Hunicke can’t force VCs to give women money, but she does look at representation at her own studio everyday.

“Funonema is 55% non cis white male... and we try to include trans, queer, people of color, people of different communities, people raised outside the United States, people that don't speak English as a first language,” she noted. “We've really tried to make diversity a huge practice, and I think one of the biggest things that comes from building a community if you can build a game that builds a community, is that you can recruit from it. My first job, which was on The Sims 2, the company was over 50% female because they recruited from their community.”

Oneal and Greer talked about how they could effect change, too, beginning with their own studio efforts.

“A big point of motivation for young females thinking about entering the industry is just seeing themselves represented in the games. I feel like we're in this vicious cycle where if you don't see yourself in the games, you're not going to be passionate about it and this is industry is so passion driven, and if you're not feeling that connection you're not going to be there,” explained Oneal. “There's less of us there making content that is inclusive and it just continues and continues, and so all of us up here and you in the future have this responsibility to make sure that we're creating inclusive casts of characters and we're really thinking about everyone so we're inviting them in.”

Greer added, “I tend to focus on what I can do personally, and that tends to be around making my own company a great place for women to work, and bringing women in who may not have thought of being in games before. At Kongregate, we hired a lot of community managers, and a lot of people straight out of our community and let them work from home. And we got up to about 40-45% female. It's not just about bringing women into the industry, it is making the environment they're in one they want to stay in, and focusing on that.”

Women in games are making incredible experiences everyday, and yet the industry is still struggling to reach parity. As of last year, 76% of the workforce was still male, while roughly half the gaming audience is female. Fostering a more diverse workforce is not only ethical, but it’s been shown time and time again that diversity is good for business.

“Even though it is incredibly difficult to make everyone happy, and I know this myself from years and years of failing, it is incredibly important to take measurable concrete steps to embrace the differences we have so far chosen to ignore, and the systems of oppression that we have participated in, however unwillingly,” Hunicke observed.

“In a sense, the best way to put it is that your voice matters, and your imagination matters. In short, every single woman that you have heard from here is doing their part to make change. And as The Strong has shown us, women make games, games make change, and hopefully each of you has the strength to lend your voice to the effort.”

Or to put it more succinctly, as Hunicke said when asked what to tell herself 10 years ago, “Don’t let the bastards get you down!”