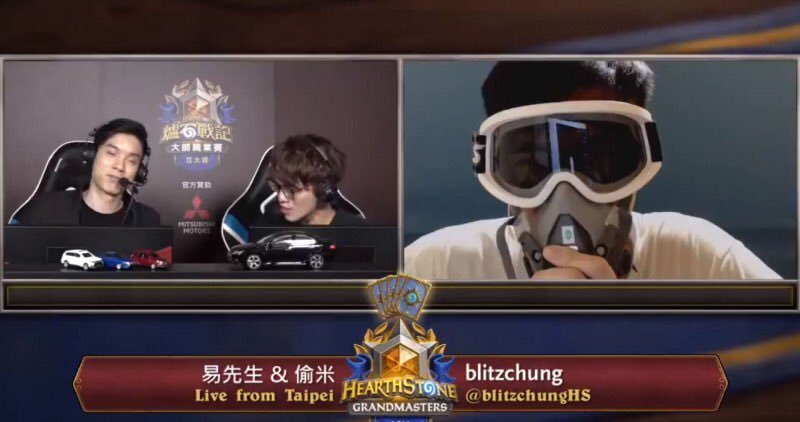 Blizzard Entertainment made waves on Tuesday when it banned popular Hearthstone player Blitzchung from professional play for a year, in addition to rescinding prize money earned in recent tournaments. The decision stemmed from Blitzchung’s on-stream support of the protestors currently fighting for sovereignty in a riot-ravaged Hong Kong. During a post-match interview, the Hong Kong native donned a gas mask and called for the liberation of his home state from an authoritarian Chinese government.

Blizzard cited section 6.1 of its official Grandmasters competition rules in the move, claiming Blitzchung violated them by bringing himself “into public disrepute” and “offending a portion or group of the public” in a way that damaged Blizzard’s image.

For Richard Hoeg, attorney for Hoeg Law in Northville, Michigan, Blizzard’s code of conduct surrounding players’ behavior is an outdated mess in desperate need of revisiting.

“The section which Blizzard has cited for allowing it to take the actions it did against Blitzchung are draconian to the point of themselves being offensive,” Hoeg told GameDaily via email. “In no respect would I ever advise a client to enter into a contract to perform services that would allow the recipient of those services to rescind the right to my earnings after the fact based on something tangential to the services provided.”

The public backlash against Blizzard’s removal of Blitzchung--whose real name is Ng Wai Chung--has been immediate and cacophonous, with many fans and analysts quick to point out that the Chinese-based tech behemoth Tencent holds shares in Activision Blizzard’s business dealings. Maintaining a positive working relationship with Tencent, some say, appears to supersede any form of sympathy for Hong Kong’s freedom fighters.

As a form of protest, many fans of Blizzard’s competitive shooter Overwatch have co-opted Mei, a character written to be from the city of Xi’an, to serve as a figurehead for a campaign to get the game banned in China. An avalanche of art has appeared online depicting her waving Hong Kong’s flag and wearing a gas mask, which has become something of a symbol in the region’s fight for democracy.

Statements from several major players in the games industry have been just as critical of Blizzard’s removal of Chung, claiming that fear of action by the Chinese government has resulted in an unjust decision. In a statement acquired by The Verge, a spokesperson for Epic Games--who also happens to be 40%-owned by Tencent--said that the company “supports everyone’s right to express their views on politics and human rights. We wouldn’t ban or punish a Fortnite player or content creator for speaking on these topics.”

Epic CEO Tim Sweeny followed up on Twitter, saying that the company “supports the rights of Fortnite players and creators to speak about politics and human rights.”

Games industry analyst group SuperData also weighed in on the controversy, equating the situation to important cultural milestones in the recent history of the United States.

“It is understandable that Blizzard wants to retain control over the content that is associated with its brands. It is entirely within its right to protect its asset and, having signed the agreement, Blitzchung doesn't have a leg to stand on, legally,” SuperData founder and CEO Joost van Dreunen wrote in an email. “But being right from a legal standpoint is subject to time. You'll remember, of course, that it was illegal for women to vote not too long ago. Here, it looks a lot like one of the largest game publishers in the world is preemptively banning players for having an opinion on their current political climate.”

Van Dreunen referenced that fact that China has banned the NBA from airing games in the country due to now-deleted tweets from Houston Rockets general manager Daryl Morey that supported the Hong Kong protestors. The Chinese government’s actions against the NBA, van Dreunen said, motivated Blizzard’s removal of Chung in an effort to maintain a positive reputation in a rapidly-growingAsian games market.

For some employees, the Chung case highlights a hypocritical paradox within Activision Blizzard’s public-facing ethos. On Wednesday, unnamed employees reportedly covered up decorative plaques that read “Think Globally” and “Every Voice Matters” at Blizzard’s Irvine, California campus. Blizzard has not yet released a statement on the incident.

Illustrating just how impactful the situation is, the shockwaves of Chung’s banning have reached beyond the games industry and into the U.S. government. In a rare show of bipartisanship, a pair of senators--Marco Rubio (R--Florida) and Ron Wyden (D--Oregon)--have expressed displeasure at Blizzard’s actions.

“Blizzard shows it is willing to humiliate itself to please the Chinese Communist Party,” Wyden said on Twitter. “No American company should censor calls for freedom to make a quick buck.”

“Recognize what’s happening here,” Rubio tweeted. “People who don’t live in China must either self censor or face dismissal and suspensions. China using access to market as leverage to crush free speech globally. Implications of this will be felt long after everyone in U.S. politics today is gone.”

With the Chung incident now officially an international matter, all eyes are on Blizzard to see how it will respond. There’s no question that the company’s reputation has already been dealt a significant blow, a fact that’s not lost on Richard Hoeg.

“The ironic thing here, of course, is that by Blizzard’s own standards, since their actions self-evidently ‘offend a portion or group of the public,’ they should probably sanction themselves,” Hoeg said on Twitter.