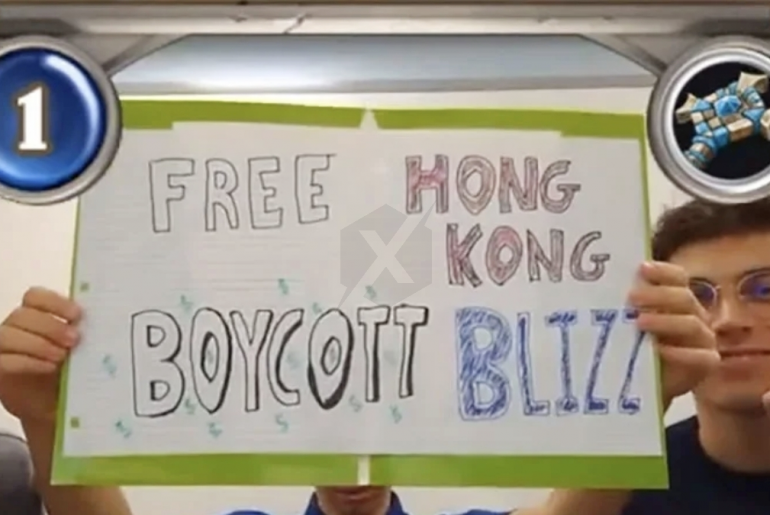 [Update 10/18/2019]  In our first story on Bllitzchung's ban, we noted that Senators Marco Rubio (R--Florida) and Ron Wyden (D--Oregon) had voiced their disapproval of Blizzard’s actions. Now they have been joined by three other members of congress, Rep. Alexandria Ocasio-Cortez (D-NY), Rep. Mike Gallagher (R-WI), and Rep. Tom Malinowski (D-NJ), who all signed a letter sent to Activision Blizzard CEO Robert Kotick, urging him to "look beyond the bottom line and promote American values." You can read that complete letter right here.

Blizzard continues to wield its mighty banhammer. Yesterday, it decided to ban three Hearthstone players from American University in Washington, D.C. for a period of six months for holding up a “Free Hong Kong, boycott Blizz” sign during their match on October 8. Blizzard initially ignored the actions of the AU team, but Casey Chambers, one of the banned collegiate players, revealed the suspension news on Twitter while noting that he appreciates “all players being treated equally and no one being above the rules.”

Chambers had previously told Polygon that he was “concerned by the hypocrisy of punishing Blitzchung but not us.”

The news comes after Blizzard broke its silence on the ban of pro Hearthstone player Blitzchung just a few days ago, returning his hard-earned prize money ($10,000) and reducing the ban from one full year to six months. The blog post penned by Blizzard president J. Allen Brack claimed that the company’s relationships in China “had no influence” on its decision to institute a ban, even though it was Blitzchung’s call to liberate Hong Kong that triggered the punitive action. Blizzard’s reaction rang hollow for many, given that Brack continues to stress that “Every Voice Matters” and Blizzard is “absolutely” committed to its values.

What those values are exactly has become a bit more hazy in the wake of this controversy. SuperData CEO Joost van Dreunen previously told us that Blizzard should do some “soul searching.” As one PR veteran told us at the time of Blitzchung’s ban, “They’ve essentially told American (and Western gamers as a whole) that they don’t share the same beliefs or values about free speech and basic human rights.”

The free speech discussion around Blizzard has been raised repeatedly over the last week, but did Blizzard actually violate the law? Not so, according to Richard Hoeg, attorney at Hoeg Law.

“There is not really a first amendment claim implicated here,” he told GameDaily, reminding us that the First Amendment “applies solely to the government” while “private actors are given wide latitude to do what they like.”

“While the bans are certainly consistent in amount, it’s worth noting that the rules that Blizzard applied to each case are not. In the case of American University, the rule under which they were penalized does not carry with it reference to a reduction in winning or further penalties, but instead strongly implies that the penalty (for disruptive behavior) should have first been a warning before escalation up the chain of potential penalties (See handbook Section 7). The rule cited against Blitzchung (as a grandmaster) was written much more broadly,” Hoeg said.

“They want to avoid being seen as hypocritical and want to instead be viewed as neutral arbiter. Despite what their own rules say, this was the easiest way to achieve that goal.”

Moreover, the American University players did not help their case for free speech by including the “boycott Blizz” portion in the sign that was held up.

“It would be a very harsh court indeed to require a company to broadcast calls for the boycott of its own goods and services. If folks want to make messages and highlight Blizzard’s problematic responses, it would be best to not advocate for a direct boycott simultaneously,” Hoeg noted.

And as much as some fans won’t want to hear this, Hoeg pointed out that, “Blizzard (as a collection of people) has its own first amendment rights as well. U.S. law generally will not force anyone, including a corporation, to ‘say’ what it doesn’t want to, and that would likely include broadcasting messages which it opposes (like the boycott message).”

The video game industry famously won its battle against censorship in 2011 when the ESA took its case to the Supreme Court, which ruled that games should be protected as free speech. A lot has changed since 2011, as esports and streamers have created the foundation for a whole new segment of the industry. GameDaily asked the ESA about Blizzard (which is a member company) and the organization’s view on free speech, but the ESA declined to comment.

“Free speech protections for video game developers and publishers have enabled our industry’s groundbreaking experiences in interactive entertainment,” the ESA’s website states. It’s unclear what the ESA’s views are on free speech rights of esports athletes, but the trade body’s mandate is to protect its member companies, not necessarily the esports pros those companies employ.

From a legal viewpoint, the only concern that Blizzard would potentially have dealt with could have stemmed from contract law and its agreements with players, but given that the American University players invited the ban, it’s basically a moot point, Hoeg added.

“In terms of violations, I think the closest question would be whether they violated their own contract terminology,” he said. “Unfortunately, the American case is a bad one for testing that premise, as it would appear from their team’s communications that the ban and the publicity that went with it was the desired end. That is, they are unlikely to challenge Blizzard on a violation of their own rules.”

Ultimately, what Blizzard is facing now has much more to do with philosophical values, and from a business standpoint, how much the ongoing backlash and public perception could hurt the company’s bottom line. A New York Switch launch event for Overwatch was already cancelled by the company, and replies to Nintendo’s tweet about the cancelled event were filled with #StandWithHongKong and #BoycottBlizzard hashtags.

“Blizzard is watching and they are listening…to see if the market actually cares about all of this, or whether the internet outrage mob will be distracted by the next shiny thing. They are certainly hoping it is the latter,” Hoeg remarked.

In the short term, Cowen analyst Doug Creutz has indicated that Hearthstone sales have been hurt by the boycott and “analysis of top grossing iPhone data suggests U.S. bookings are 18-23% lower than without the boycott.”

The larger question is how long the anti-Blizzard sentiment will continue and what, if anything, the company can do to appease the “outrage mob” at its own BlizzCon event, which is only a few weeks away. Digital rights group, Fight for the Future, is already committed to giving Blizzard a massive headache at BlizzCon by organizing a protest.

How Blizzard handles its messaging and the crowds at BlizzCon will be crucial to the future of the studio. Any more missteps and J. Allen Brack might have to change his name to Sisyphus.