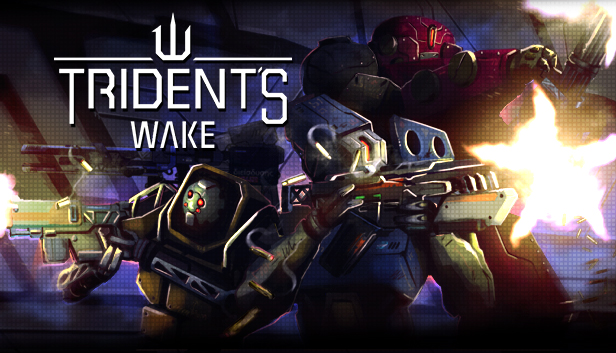 The developers at Bacus Studios were understandably thrilled when they took the award for Best Multiplayer Game from Indie Prize at GameDaily Connect USA. It wasn’t just that they’d won, though, but that a tiny studio from Argentina could take home an award when put up against talent from all over the globe.

“Winning Indie Prize is an endorsement, mainly so due to the fact that we, a small studio from Argentina, were able to compete and even win against amazing talent from all over the world. No small feat!” said Ignacio Baldini Pescarmona of Bacus Studios.

Their game, Trident’s Wake, is a cooperative twin-stick shooter that pits up to four players against hostile aliens that have taken over humanity’s last colony ship (and last hope). Using an array of sentinels with different combat powers, players can build a team that works well with one another in order to survive against the dangerous creatures.

It wowed the judges at Indie Prize, bringing a prize, and more importantly, some welcome affirmation to the work the studio was doing. Still, Pescarmona felt the win meant something even more than that, as it was also a win for other local small indie studios – a sign that what they are doing is all valuable, and that people out there will love the work they’re doing.

It would also draw more eyes to the work being done in the area, according to Pescarmona. “Moreover, as a leader of the local industry, this also helps us to spearhead and funnel more attention to the gaming industry as a whole. This helps not only us, but also newer studios which are coming up behind us.”

Bacus Studios is working to keep this momentum going for other developers in their area, pushing for more funding as investors see the potential in Argentinian games. “Since we are based in Argentina, funds are scarce at best. We are currently working and lobbying to promote and secure funding into the industry, but is a slow ongoing process,” said Pescarmona.

While Bacus Studios may be pushing to help other local devs, that doesn’t mean they weren’t also busy taking in experience from other developers at GameDaily Connect USA. “Traveling to events is one of the most mind-opening things you can do. I would even venture to say that this is a given for any industry. If I had the chance to speak to other devs, I would wholeheartedly recommend them attending and signing up for these prizes, for they will only enrich you and your team,” said Pescarmona.

“Every day you learn something new. Traveling and speaking to other devs completes your knowledge and give you ideas on how to improve your own tools and development, while also helping other people out. It is imperative for people to travel and mingle in these type of events,” he continued.

For Pescarmona, there’s a value in breaking down barriers and sharing in each other’s knowledge. Developers can learn a great deal from one another, and can push each other to work harder and make better games through friendly competition that aims to build each other up and share in each other’s accomplishments. Through these connections, his team can grow, his own skills can grow, and the local game development community can grow through the attention their win brings to the area.

Like their cooperative game, it’s about bringing that variety of talents together. Going it alone with your skills may not be enough, but when you bring those unique abilities together – when developers share their skills – you can overcome impossible odds.

When asked how he felt about creating games, Pescarmona said, “Indie games are amazing; As a consumer, I love them! As a developer, it is fraught with peril… you need to fulfill many roles and do a lot of things correctly in order to succeed. It’s not for the faint of heart.”

It was never going to be easy, but through the dedicated work of the team at Bacus Studios, they created an award winning game with Trident’s Wake. And they’re just getting started (even if they cannot say what’s next: “I am afraid we are under NDA for a possible future project.”).

Through working together and making those connections, Bacus Studios hopes to continue to grow and share their victories with their community to make things easier for everyone.