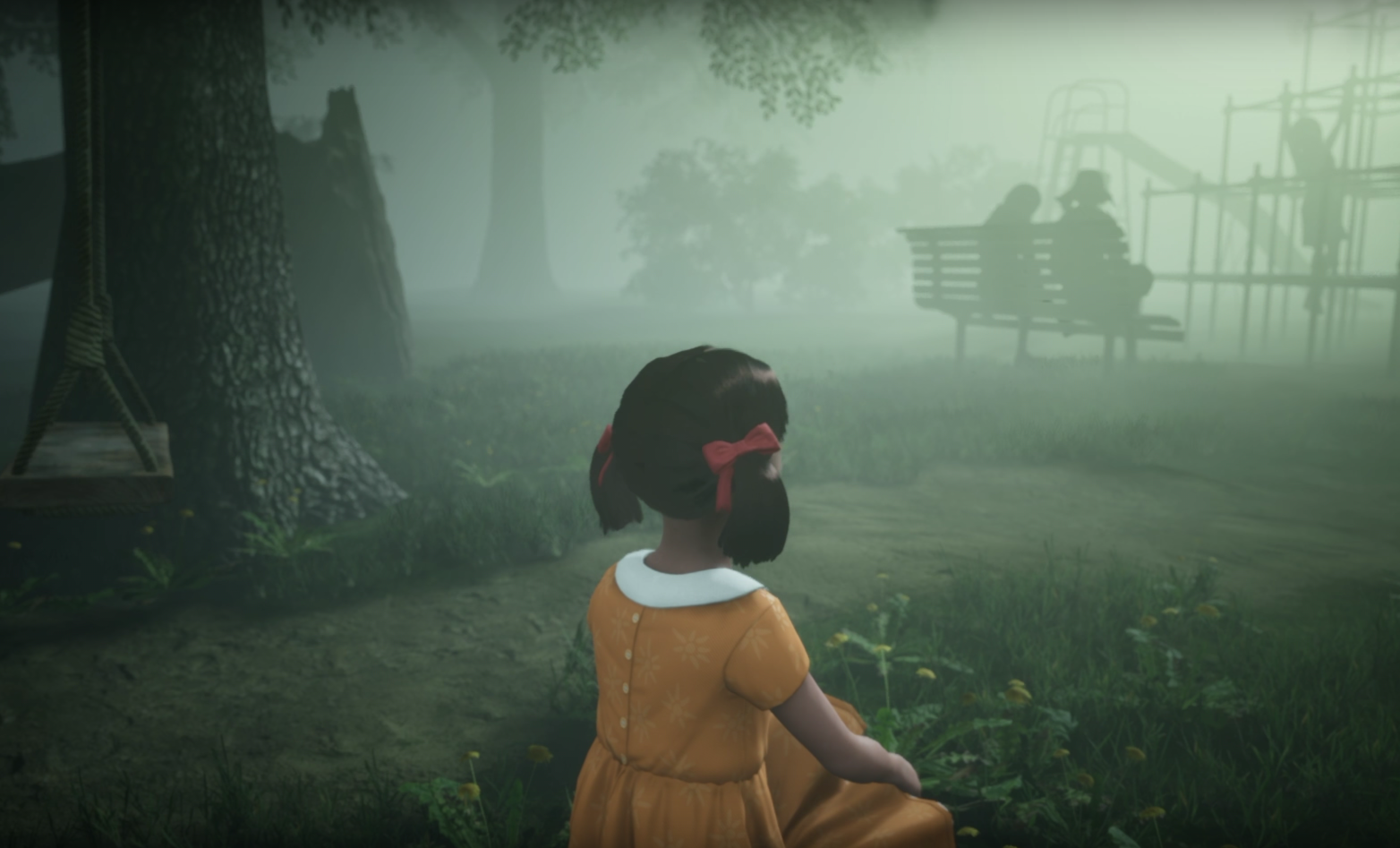 The story behind The Lighthouse is about family connections long lost. A detective seeks a lost child who bears the same name as his own child who was lost to cancer. Horrors try to keep them apart. Through the events of this story, which won Best Narrative from Indie Prize at Game Daily Connect USA, players will see the importance of those family ties, and why it can be so necessary, even when life has you busy and bogged down, to maintain them. For one day, they’ll be lost.

That’s an important message from the developers at Shadow Knights Studio, developers of The Lighthouse. “Taking time away from the project and enjoying family and friends has been very important for all of us,” said Ari Bodaghee of Shadow Knights Studio. “We've lost very important people in our lives while we've been in development of The Lighthouse. It is okay to take time off and reconnect with what matters, and it is okay to seek help when you need it. It's no coincidence that The Lighthouse narrative arc deals with characters being at their lowest and finding redemption.”

It can be easy to lose yourself in the months and years that developing a game can take. There’s always something pressing that needs to be done. Some task that feels like it cannot wait. Something that you feel will make tomorrow easier if you push through it today. Even so, your family and friends continue to age as time passes, and the important things in your life can grow distant from you as you ignore them for your work.

Bodaghee, and the other developers at the studio, know a lot about long hours. “The most difficult issues we've faced when developing The Lighthouse has been related to self-publishing and keeping the lights on. Games are very difficult to make and are incredibly expensive to produce.”

“We try to mitigate costs by keeping the team size small and lean and selectively contracting out work that we aren't capable of creating ourselves. We try to pull in contract work, but that also affects the development of the game. There can be times where we are working to make money and The Lighthouse hasn't been touched in 2 months. It's a sort of a Catch-22 that doesn't get talked about a lot: do we work on The Lighthouse and bring its release date closer, or do we halt progress and earn money to live?” he continued.

Even in working to make one game, the studio often finds themselves taking on multiple jobs just to be able to afford to continue development. When doing this, it’s easy to lose yourself in the hours, struggling to do enough work to make the money you need to do the rest of the work you need.

Not that the results were not worth it to Bodaghee. “Winning at Indie Prize for Best Narrative was one of the most profound awards we've received to date. We've worked really hard to build The Lighthouse for several years and, as you can imagine, there have been many instances of doubt and fear that the game may not deliver meaningful moments or find an audience.”

“There are so many amazing games to play that, for us, the validation that people embrace our game and feel compelled enough to stay engaged in its unique story means that we have achieved our goals. It was an honor to receive the award considering how breathtaking the other games in our category were. We still can't believe we won!” he continued.

Even so, there is always a need to focus on those friendships and connections, even when money, stress, and fear takes hold. It’s always been a key factor in moving forward for Bodaghee – that we are at our strongest and best when we remember our ties to family and friends, leaning on them when we need them.

“Even with everything life throws at you, try to not lose sight of why you love creating in the first place. Take time off to spend with family and friends, and never overwork yourself. If you feel burnt out, take a break from the project entirely and/or work on something different if you feel like you need to keep the needle moving,” he said.

These empowering friendships can come from some unexpected places, including fellow devs who know a great deal about what you’re going through. “Make as many friends as you can with people who share the love you do about video game creation. Networking is a waste of time- the real value in your life is building relationships and making new friends. These people will be there to lift you up when you're down, and you will be there to lift them up when they need you most,” said Bodaghee.

Winning the award, and attending GameDaily Connect, was a big part of making those friendships and connections. “If there is one take-away from what we've experienced at GameDaily Connect and the industry as a whole, it is that everyone is absolutely committed to excellence. To the people who commit entire careers to coordinating the events, the people who diligently show off their games, and the people who cover these events - it's truly amazing. We are very grateful to be a part of such a passionate industry full of talented people all looking to elevate the medium to new frontiers. We had so many friendly people who welcomed our team and found ways to include each other while being fun and respectful. I don't think you'd see that in any other field,” said Bodaghee.

The studio has also found a great deal of energy in their connections with their fans, continuing to be fueled by their support when things are rough. “It's all very difficult, but we are also very lucky that we have a passionate group of fans on our Discord that cheer us on! Without the support of them and our friends and family, we may have not gotten as far as we have,” said Bodaghee.

The studio has only grown better and better in their workflow, helped greatly by a support network of peers, family, and fans. “The good news is we've learned a lot about ourselves and how to optimize our workflows so that things can be done better than when we first started,” said Bodaghee. “We've learned a lot about making better use of project management tools and incorporating that into our day-to-day operations. Knowing what we're not capable of doing and not letting pride get the best of us has also dramatically improved the experience, and has lead to a better work environment for everyone on the team.”

And with so many excellent games hitting the market, it’s an important time to have all of the support you can get. “We think that more options for more people is always a great thing. Players will definitely enjoy their time with popular AAA games and platforms of choice, and the good news is there will always be a place for those lovable indie-gems! Today's indie games are pretty amazing!”

“In an effort to stand out in a crowded marketplace, we're witnessing levels of polish and quality never before seen in the indie space. Indie games are wildly popular because they can provide unique experiences that are really fun to play. And when you think about it, a good chunk of today's AAA games technically started out as indie games decades ago. So, give indie games a chance, yeah? They might be something even cooler one day with the right player-base and backing,” he said.

Bodaghee sees that market only growing more challenging with new tools allowing for more and more spectacular experiences. “The number of games released every year will continue to increase, so we're all going to have to adapt to these changes. For instance, what separates an indie game from a AAA game will continue to shrink over time as new tools are released for rapid development,” said Bodaghee.

“One day (and this is kind of a prediction for the future of game development), games may be created by one person in a matter of days/weeks, and will look significantly better than any game built-in 2020. Music, writing, acting, cinematography, coding, performance optimization, and packaging will be done with the help of Artificial Intelligence. The creator will dictate their preferences and style- and the machine learning algorithms will push content onto the screen based on the creator’s parameters within seconds. We're in for a wild ride!” he continued.

It’s a future that’s frightening and exciting in equal measure, but Bodaghee still hasn’t lost his hopeful nature for what’s coming next for the studio. “Our immediate goal is to release The Lighthouse: Chapter 1 and then start working on The Lighthouse: Chapter 2. We have a new baby boy in the family that we are going to spend some quality time with while we tinker on some new game ideas that delve deeper into narrative-driven gameplay. In the meantime, follow us on our different social media platforms! We love to interact with everyone!”

Perhaps that optimism stems from the support Bodaghee and Shadow Knights Studio holds as so important. With so much work to do and so much competition, it can be easy to forget your support network, but to Bodaghee, those connections are a part of what truly fuels your creativity and craft as a developer, and are vital to keep you moving forward as a person and an artist.

GameDaily Connect Asia 2019 in Shenzen, China (November 10-12) will host the next Indie Prize showcase with plenty of talented developers exhibiting. You can register right here, and you should take advantage of the last minute discounts on tickets, as prices will be going up after November 1.