Blizzard President: 'We failed in our purpose... and I accept accountability' [UPDATE] 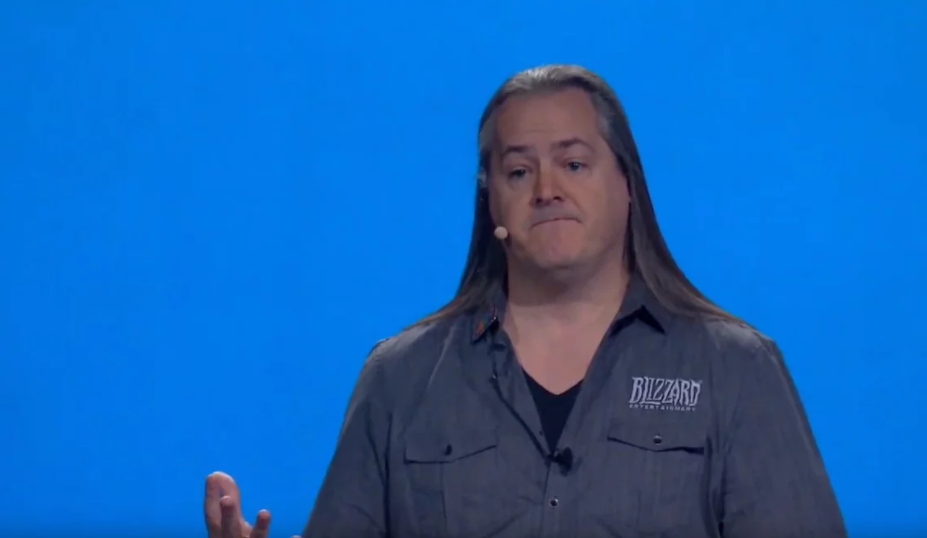 [Update 11/4/2019] In the aftermath of J. Allen Brack's opening speech, the Blizzard President was asked by PC Gamer if his company might reconsider Blitzchung's ban or those against the Taiwanese casters who were involved in the incident. Despite the on-stage apology, Brack said Blizzard would not be changing or reversing the punishments.

While reiterating that Blizzard is a huge supporter of free expression and free speech, Brack explained, "I feel like we have a far more open set of guidelines and policies than really any other traditional sport that takes a view around making sure that all of the people stay on message. And so, that's how we think about free expression and how we've contextualized it.

"We want the official broadcasts, which are a small percentage of the overall content that gets created, to be about the games. And we want those to be focused on the games. Again, it's not about the content of Blitzchung's message. It's about the fact that it was not around the games. If we hadn't taken action, if we hadn't done something, you can imagine the trail that would be in our future around doing interviews. They would become times for people to make a statement about whatever they wanted to, on whatever issue. That's just a path that we don't want to go down. We really want the content of those official broadcasts to be focused on the games, and keep that focus."

As we look back at the year in gaming, Blizzard’s ban of pro Hearthstone player Blitzchung and subsequent handling of the controversy (including reducing his ban sentence instead of reversing it while proceeding to ban collegiate players) will go down as one of the biggest news beats of 2019. The immediate backlash from the community, other esports players and even some of Blizzard’s own employees was palpable, and today the backlash was literally visible as Polygon reported that protesters gathered outside of BlizzCon to show their support for Hong Kong and to denounce Blizzard’s actions.

During the opening ceremonies at BlizzCon, Blizzard President J. Allen Brack addressed the situation, welcoming the protests and apologizing for his company’s actions without specifically naming Blitzchung or what had taken place, but instead referring to a “tough Hearthstone esports moment.”

Brack acknowledged, “We moved too quickly in our decision-making, and then to make matters worse, we were too slow to talk to all of you. When I think about what I'm most unhappy about, it's two things. The first is, we didn't live up to the high standards we set for ourselves. The second is we failed in our purpose. And for that, I am sorry, and I accept accountability."

What that accountability looks like is unclear, as Blizzard does not seem to be changing its policies that led to the bans of Blitzchung and the collegiate players. And while Brack has previously said that China had nothing to do with Blizzard’s actions, nothing he talked about on stage seemed to make the company’s stance any clearer when it comes to supporting free speech or caving to the demands of authoritarian regimes.

As members of Congress said in a letter to Activision Blizzard boss Bobby Kotick on October 18, “As China amplifies its campaign of intimidation, you and your company must decide whether to look beyond the bottom line and promote American values--like freedom of speech and thought--or to give in to Beijing’s demands in order to preserve market access.”

Brack countered that notion during his speech by remarking on the diversity of the attendees at BlizzCon and how the company welcomes freedom of expression, but in the end it may ring hollow if Blizzard’s actions do not change.

“What exactly is our purpose? BlizzCon is demonstrating it as we speak,” Brack said. “We aspire to bring the world together in epic entertainment. I truly believe in the positive power of video games. When we get it right, we create a common ground where the community comes together to compete, connect, and play, irrespective of the things that divide us. BlizzCon has people from 59 countries all around the world at the show today. That is amazing. That is the positive power of video games — to transcend divisions around us. We will do better going forward. But our actions are going to matter more than any of these words. As you walk around this weekend, I hope it’s clear how committed we are to people expressing themselves.”

But that’s just the problem. At this point, it’s still not crystal clear. Blizzard could have taken a firmer stance, and they could have been even more direct.

As SuperData Managing Director Joost van Dreunen commented to GameDaily weeks ago when this blew up in Blizzard’s face, “Long, term, Blizzard should do some soul searching. Lots of creative firms have a strong opinion on the social, cultural and political realities of our time. Game companies, especially the publicly traded kind, are not exempt from this. When Nike got called out for endorsing slave labor, it took responsibility and re-built its internal belief structure from the ground up. My recommendation is that Blizzard and its peers think deep and hard about the values they purport to uphold in relation to their respective company strategies.”

For publicly traded companies that have identified massive growth opportunities in China, this is going to be a common problem, as van Dreunen alluded to. The fact is that Activision Blizzard’s valuation is partly based on what investors think the company can achieve in China. At one point, nearly a fifth of the company’s total revenue came from the Asia Pacific region. Activision Blizzard’s last quarter showed that Asia Pacific represented about 12% of sales, but there’s now a strong push to bring Call of Duty to mobile on China. And if Blizzard is seen as supporting Hong Kong, the government approvals needed to bring its game into the country may be hard to gain.

It’s an incredibly difficult spot for Blizzard to be in, and it’s one that requires steadfast leadership and courage. BlizzCon’s major game announcements are sure to still excite many fans, but none of it changes the challenge and long road ahead for Blizzard and for Brack. After his apology, Blizzard went on to confirm Diablo IV, unveil Overwatch 2, a World of Warcraft expansion called Shadowlands, and an autobattler mode along with Hearthstone expansion Descent of Dragons.

There’s no doubt that Blizzard damaged itself with its handling of this whole situation, but it’s not necessarily irreparable. The company now finds itself at one of the most important junctures in its nearly 30-year history. How it handles the coming months could be tantamount to taking some healing potions or charging ahead like a tank with just a few HP remaining. Who will Blizzard be?