GameDaily Connect Asia 2019: Self-publishing can be an incredibly punishing route for indies 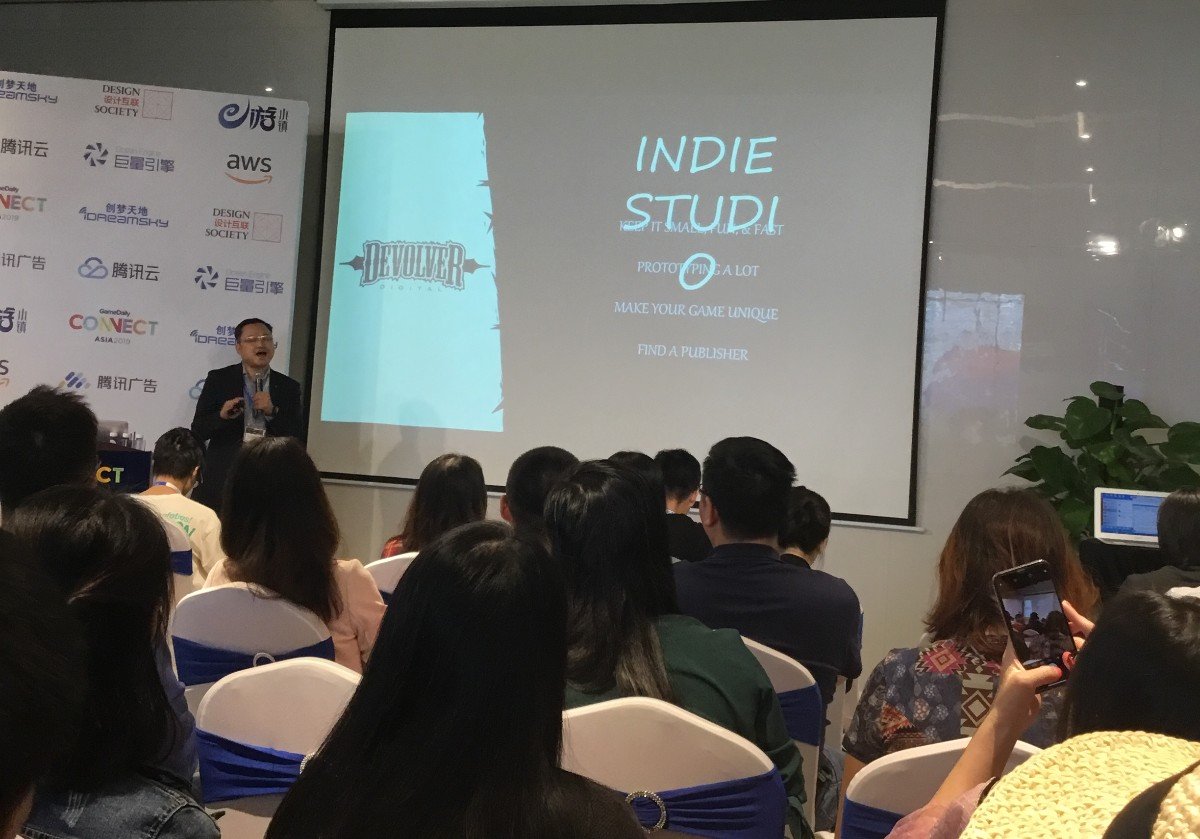 (Disclosure: As Simon Chang’s talk was conducted in Chinese, the quotes in the article are translated by the writer and lightly edited for clarity.)

One of the first pieces of advice that Simon Chang, Vice President of Asia Pacific at Devolver Digital shared in his talk on publishing indie games, is the vital importance of pitching early to publishers. “You should be pitching your game at an early stage or during prototype. Don’t only do so when you’ve completed your game,” he said. With Devolver Digital looking to collaborate with more indie developers based in China and Asia Pacific, this was valuable information to the audience, which were made of both professional and budding student developers.

Devolver Digital is known for being strongly developer-centric, and Chang spoke of the company’s belief that game publishers should recognize the artistry and believe in the vision of the developers they work with. He shared the four pillars that make up the philosophy that drives Devolver Digital: recognize, reward, trust and enable. “When they are developing a game, they become artists—as such, we should let them do what they need to do, rather than disrupting them with our own ideas,” he added.

Take, for instance, the pillar of trust; Chang explained that most games Devolver Digital signs a publishing agreement with are in their early stages of development. “Things will look very different at the later stages, so it’s important to trust their artistry and believe that whatever changes they make are the right ones,” he elaborated.

That means when the publisher and developer both trust each other on a deeper level, developers will be emboldened—and thus enabled—to make better, bolder games. Chang spoke candidly, stating that as he grows older, he finds himself less able to understand and keep up with newer games, preferring to trust that developers themselves know what works best for their games. “Even the games that our CEO recommends are bad,” he joked.

“We see ourselves as a record label. That’s what the Devolver Digital philosophy is all about,” said Chang.

With that in mind, Chang suggested some pointers that every indie developer should keep in mind. The first one is to “keep it small, fun and fast.” In other words, indie studios should try to keep themselves as lean as possible. “If it’s only one person—all the better,” he said. One example he brought up was DeadToast Entertainment’s My Friend Pedro, a game that was the effort of a single developer, Victor Agren; with the exception of the game’s soundtrack, he produced everything—from art to game design—by himself. Chang said that the game sold exceedingly well, and Agren’s effort definitely paid off for him.

His second tip is to keep producing prototypes of your game that studios can share with publishers. He stressed that the game demos need not be perfectly polished; what’s most important to him as a publisher is the game’s core gameplay.

Finally, the game also should be unique. “Get your friends or classmates to look at your game, and ask them if it looks like any existing game in the market. If it does, it’s probably not a very good game,” said Chang. “Plus, having a unique game makes it easier to secure a publisher as well.”

Chang also spoke briefly about the unique requirements of publishing an indie game in China, one of which is the need to apply for an ISBN license number. This is part of the games approval process that all games looking to be sold and published in China have to go through.

Of course, indie developers can pursue self-publishing and release their games on the Steam, iOS and Android platforms by themselves, noted Chang, but he added that this will not be an easy path to take. Ensuring that your game can stand out within the Steam platform can be a challenging endeavor, given how oversaturated the marketplace is.

“Steam is a pretty complex platform, and releasing your game there means conducting thorough research. Most of all, you shouldn’t just rush into it,” he said. “Finding a publisher to work with is the best… the route to self-publishing is just not an easy one to embark on.”