GameDaily Connect Asia 2019: Why mobile esports games are cementing their position in the mainstream 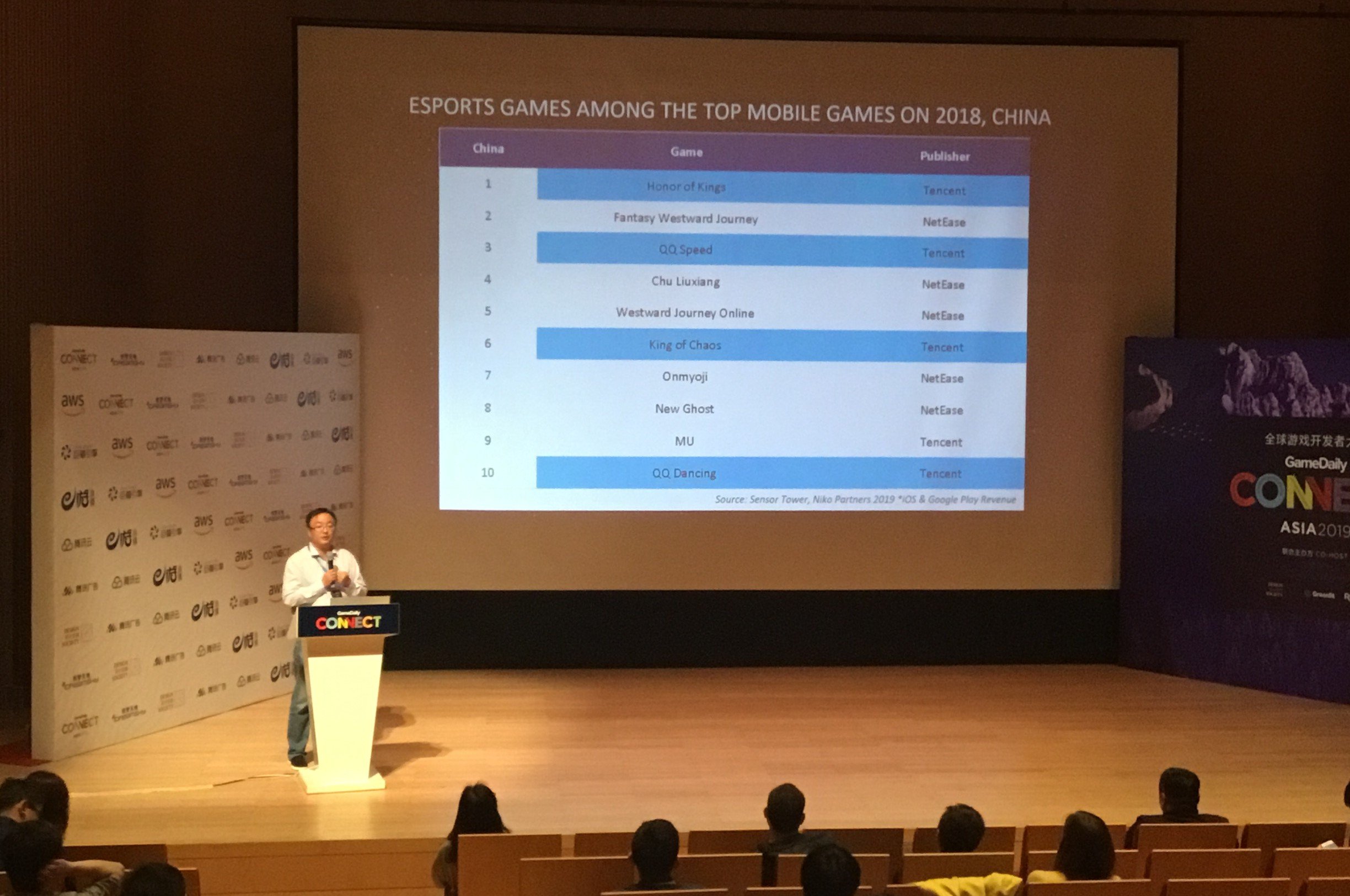 (Disclosure: As Xiaofeng Zeng’s talk was conducted in Chinese, the quotes in the article are translated by the writer and lightly edited for clarity.)

7,346,674. That’s the highest number of viewers the 2018 Honor of Kings Champion Cup—an esports tournament around one of China’s most popular MOBA titles—saw. This is testament to the prevalence of mobile esports in the country. In fact, according to Xiaofeng Zeng, the General Manager, China of Niko Partners, MOBAs will be one of the driving factors behind the mobile esports boom in the country.

Mobile esports is quickly becoming the fastest growing sector within esports, and such a boom is propelling the scene from a mostly niche industry to the mass market. This growth didn’t come as a surprise for Zeng; mobile esports have a low cost and barrier to entry, enjoy higher install rates and can be played anywhere. Plus, it meets the needs of the biggest gaming audience: there are many more gamers on mobile platforms than that of PC and console combined. Coupled with a rising smartphone penetration rate pegged to the popularity of mobile games, the genre is gradually shaping the esports industry—even outside of China.

To that end, Zeng pointed out the immense popularity of Fortnite among younger American gamers. “The American market for mobile games used to skew towards older gamers, but the appearance of Fortnite has introduced more players to the genre,” said Zeng. “A lot of my American colleagues have told me how their children have been playing Fortnite on their phones. This would have been inconceivable last time.”

And this isn’t limited to just America. Globally, the revenue share of mobile esports games has reached $15.3 billion in 2018, and it’s estimated that the global smartphone penetration rate will hit 61% by 2025. “When it comes to the increase of mobile phone penetration rate, there is, frankly, still plenty of room to grow,” added Zeng. Driving the growth of the global rate of mobile gamers are a few factors; social media and live streaming are driving discoverability, engagement and consumer spending.

Back in China, the stats on mobile internet and games are even more staggering. Consider how the domestic mobile game revenue has hit $15.63 billion in 2018—a figure that went up by 28.9% from the previous year. This took place even amidst the country’s game licensing freeze that took place over several months, only thawing in January this year. In spite of this, revenue is still forecasted to reach $25.49 billion by 2023.

One stat that Zeng specifically drew attention to in his talk was the stat on mobile gamers in China: 74.5% of China mobile internet users play games on mobile devices. He mentioned that this figure includes gamers as young as those who are still attending elementary school. He made it clear that this is why the Chinese government is particular about restricting gaming hours for underaged gamers; in fact, China has already imposed acurfew on gaming to minimize the risks of videogame addiction.

Recent trends that are facilitating the popularity of mobile esports makes this decision all the more significant. More cyber cafes are appearing in the country, creating dedicated spaces for mobile esports, while multiple esports leagues and tournaments are beginning to recruit and form mobile esports teams. Powerful gaming smartphones are also seeing development, while 5G and edge cloud computing will reduce latency, leading towards a much more seamless gaming experience for players.

“Competing directly with these two companies will definitely be a challenge for many developers,” said Zeng. “Yet if we were to categorize this list into months instead, we will be able to see games by other developers.” However, he noted that most games cannot sustain this growth, typically only peaking for a month or two before losing their positions to the games by the two behemoths. According to Zeng, this is also why many game developers in China prefer to look towards overseas gaming markets.

“The combination of 5G, mobile penetration and mobile technology will make mobile esports a global phenomenon,” said Zeng. “Given that the mobile platform is already a larger market than PC and console, and that mobile games are more able to monetize free-to-play games, this lays a solid foundation for esports as a whole.”

He believes that mobile games also reaches a larger and more diverse audience too, which will attract a greater variety of gamers. To Zeng, all these factors meant that the rise of mobile esports is inevitable, with the genre eventually dominating mainstream gaming.