Half-Life: Alyx coming to VR in March 2020 and will be VR's most important test yet 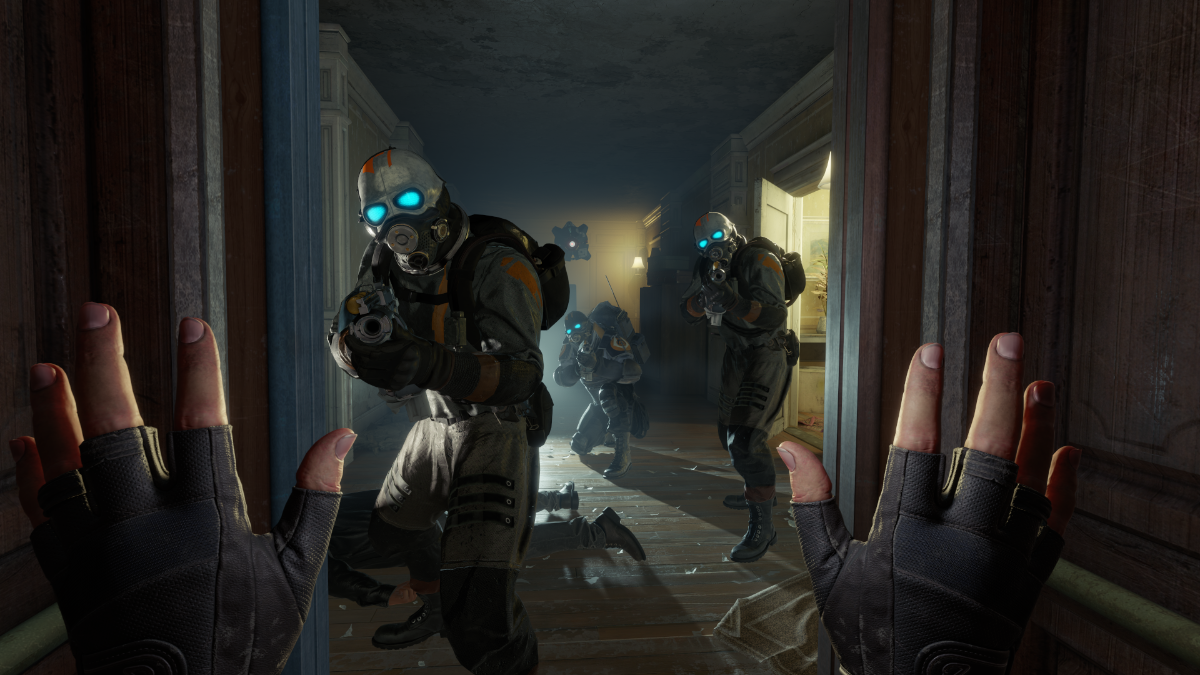 It’s finally happening. No, you’re not dreaming. There’s a new Half-Life game coming... but it’s not Half-Life 3. Valve today unveiled Half-Life: Alyx, a full AAA-quality experience for VR headsets set before the events of Half-Life 2, with an expected launch of March 2020. It’ll be the first new Half-Life experience in more than a dozen years (since Episode Two) and it could prove to be a major litmus test for the VR games marketplace.

Media veteran Geoff Keighley, host of The Game Awards, has been visiting Valve Software for the past couple years in secret to chronicle the game’s development in an upcoming “The Final Hours” piece, similar to what he did more than two decades ago to explore the development of the original Half-Life. On Twitter, Keighley explained that this Half-Life game is unlike almost any other major VR game before it. “I’ve played through HL: Alyx (it took me over 15 hours) and seen it in multiple stages of development. This is a full-blown Half-Life experience, with a rich, vibrant world, immersive combat, great storytelling, and innovative game design,” he said.

As part of “The Final Hours,” Keighley released a new video interview with the team working on the game. Valve game designer and co-creator of the original Team Fortress mod, Robin Walker, said that back in 2016 when the Vive shipped, although Valve was happy with The Lab, they knew players wanted something much bigger.

“Customers were saying, ‘Where’s the big VR game?’... It seemed to us people were asking, ‘Where’s the big, all-encompassing content sprawl that you get in a big AAA title of some kind?’ And there are many reasons why it’s hard to justify something of that scope in VR. We felt like that’s a role we can fill because we can certainly invest in longer-term strategies around putting more effort and money and time into something that we may expect a return [from] the audience in VR,” he explained.

The best-selling VR games, like Beat Saber, tend to be a lot of fun but they are typically not in the vein of a 15-hour action adventure, or something that you’d play for hours at a time. The demand for that kind of experience is certainly there, as evidenced by the reception for ports of Skyrim and Fallout, as SuperData principal analyst Carter Rogers told GameDaily.

“Thankfully, the game does have a lot of potential to attract newcomers to VR,” he said of Alyx. “To drive adoption of gaming hardware, a single ‘killer app’ like this is often more effective than a wider selection of ‘pretty good’ games. If the Nintendo Switch hadn’t gotten momentum at launch with the release of The Legend of Zelda: Breath of the Wild, the system likely wouldn’t be quite the success story it is today.

“Players are also hungry to experience their favorite franchises in VR. In 2017, the top-earning PC VR game was Fallout 4 VR and the top PlayStation VR game was Skyrim VR. These titles weren’t even originally built for VR, but gamers purchased them anyway to play large-scale, big-budget VR games. And there aren’t many franchises that gamers are more eager to return to than Half-Life.”

Fans are definitely eager, but Valve has obviously been hesitant, focusing instead on dominating digital distribution with Steam on PC. Valve said that ever since The Lab, they continued to experiment with different gameplay possibilities in VR, and even different franchises. It was not immediately clear that they would pursue a Half-Life game in VR.

David Speyrer, the lead designer on Half-Life 2 and Episode Two commented in Keighley’s video, ”We kind of settled on either Portal or Half-Life as interesting, and Portal is so much about flinging yourself through space and through portals that we thought ‘We’re going to make a bunch of people sick with this game’ … Then we looked at Half-Life and the DNA of that product and a bunch of the elements seemed really enhanced by VR. Half-Life is about this cadence of story, puzzle, combat, exploration, interaction, environmental art, vistas, and they all seemed to be enhanced or reinvented in interesting ways by VR.”

It all started with Half-Life 2 assets, said Walker. “Our intention was to build 15 minutes of a Half-Life experience using Half-Life textures, assets,” he said.

Valve level designer Dario Casali added that in some ways the team felt less pressured about approaching the venerable Half-Life franchise again because it began as a simple exploration of VR mechanics. “That made it a lot easier, because it was ‘What can we do? How can we translate the Half-Life mechanics to the hands and the headset?’ It was immediately obvious that there was a lot of potential with this stuff. And just one after another we put these Half-Life mechanics into VR. Some of them worked really well and some were pretty comical upfront, but there were enough that were really promising that we sort of just organically grew as we saw [what worked],” he stated.

Walker noted that in testing, people were regularly spending 45 minutes playing a 15-minute experience because they were exhibiting new behaviors and exploring and examining the environment more than in old Half-Life games. “We were really excited, because if players are exhibiting that kind of interest in exploring before we’ve even really [gave them] any reason to explore in this prototype [we knew we were on to something].”

Once Valve started down this path, the next Half-Life would be inextricably tied to VR. The game could conceivably be ported to traditional platforms, but Valve effectively leveraged so many VR mechanics that they’d have to radically change certain interactions or dumb the game down.

The first two Half-Life games have combined for nearly 16 million units sold. When Alyx is released next March, it will have little hope of coming anywhere close to that figure. Valve is looking to support all PC-based headsets, which means it’s skipping PSVR, which has sold around 4.7 million units to date, according to SuperData. With the Oculus (presumably including Quest when connected to a PC via the Link cable) and Vive headsets, the total installed base for Alyx will only be a few million. But maybe this is just what the doctor ordered for the VR games market?

“There is undoubtedly a lot riding on this game. If Half Life: Alyx can’t bring hardcore gamers into the VR ecosystem, it’s hard to see how anything can,” Rogers remarked to us.

He continued, “Unfortunately, this game likely would have had a bigger impact on the PC VR market if it had launched a year or two ago. PC headset sales actually peaked back in 2017, and the consumer side of the industry has shifted to focus on standalone headsets like the Oculus Quest, which are set to generate over half of consumer VR revenue next year. Also, many game developers have left the VR space entirely or have shifted their focus to making VR attractions for theme parks and arcades.

“Once VR newcomers have their fill of Half-Life: Alyx and other existing VR titles, they’re going to need to see consistent releases of new PC VR games or they could lose interest in the technology.”

Consistent release cycles have not been Valve’s forte. Perhaps Alyx (especially if it does well) will inspire more big budget titles from other major studios, or at the very least, maybe it’ll grease the wheels for the oft demanded Half-Life 3.

When Keighley asked about Half-Life 3, Walker commented that back in 2016 when they started exploring this VR idea, making a true sequel was a “terribly daunting concept.” Overall at Valve, however, there’s tremendous excitement to be able to work on Half-Life again, as a number of employees there now -- including the members of Campo Santo that Valve picked up -- never had the chance. “It was really easy to recruit for this project,” said Casali.

Keighley inferred that it’s a “bridge to more” because the Half-Life: Alyx technology could pave the way for even more Valve experiences in VR. Whether or not Valve is actively back to making more games on a regular cadence, and whether that will be in VR predominantly or on other platforms isn’t clear at this point.

That said, the newfound excitement at the studio is something that will no doubt give fans hope. “We’re very excited about building more Half-Life, that’s for sure,” Walker enthused. “We’ve had an absolute blast building this game… It is incredibly fun to be building single-player products again.”

“We want to put this out and see how the world reacts to it before we make any concrete plans about what we do next,” added Speyrer.

The excitement is quickly building for Half-Life: Alyx. The official trailer has more than 800,000 views just a few hours after the reveal, and developers in the VR community are beaming. Cy Wise, Co-Founder and Live Raccoon at absurd:joy, told us she’s super excited. “The trailer looks amazing and we've been screaming on Twitter all day… just can't wait to put our faces in it, like the rest of the internet,” she said.

March 2020 should prove to be a very interesting time for the VR marketplace. Not only will the performance of Alyx potentially dictate what Valve’s next move could be, but the game’s sales will guide studios and investors alike in determining the true health of VR gaming.