The Walking Dead: Saints and Sinners – Can VR Revitalize the Zombie Genre? [Sponsored] 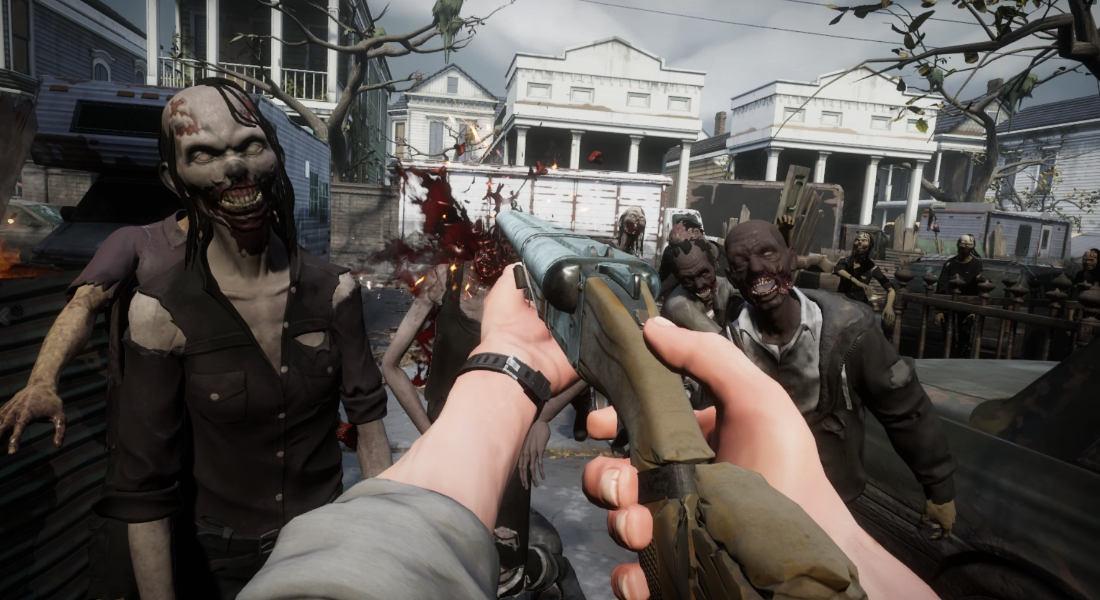 Over the years, the once-popular zombie genre has seen player interest waning. Compared to the steady flow of zombie games that came out early in the 2010s, very few are made each year now. At the same time, mainstream culture seems to be showing less interest in zombies in general these days. The last season of TV show The Walking Dead, for example, is seeing far fewer viewers for its finale thanany of its other seasons.

This seems like a highly risky atmosphere for a developer to be releasing a new zombie game into, let alone one based on The Walking Dead that also leverages VR (effectively a niche within a niche). And yet, that’s exactly what Skydance Interactive is doing with The Walking Dead: Saints and Sinners.

The VR title, which takes players to an undead infested New Orleans, aims to capture the brutality and human drama that originally propelled zombie games and The Walking Dead to their incredible popularity years ago. The personal connection and reality that comes with VR seemed to be a perfect way to infuse the game with that human connection to both violence and kindness that kept audiences glued to screens years ago.

“I think for us as a team everybody just latched on immediately to a Walking Dead VR game, like of course, that’s a great idea,” said Guy Constantini, VP of Global Interactive Marketing at Skydance Interactive, in an interview withDualshockers. “I think it’s great on two levels. One is the pretty obvious [reason] that survival horror is great and creepy. You’re in a dark house, it’s quiet, you hear the Walkers move, you have your little flashlight and it runs out of battery. It’s great scary stuff. But also, it’s really about all the human moments experienced in VR. It’s equally rich and powerful so we were excited about both of these opportunities.”

Survival horror can make for an unsettling, compelling experience, but in VR, that horror can be amplified exponentially because it is happening to the player on a very direct level. “The way I process these scares is not through the eyes of a person using their critical media-viewing faculty but through the eyes of I, the self, with all of the very human, systems-level, subconscious voodoo that comes along with that,” said Scott Stephan, a designer at Wevr, in an interview withThe New Yorker.

That kind of experience naturally lends itself to an intense connection with the player, as VR can give the player a powerful sense of being within the game’s reality. It’s hard to be blasé about your personal actions within a game’s world when you feel like an actual part of it. “Your body becomes profoundly integral. Your body becomes the interface,” said Stephan.

This connection did create some challenges for Skydance as they sought to push the edges of what VR is currently capable of. When asked about these challenges, Constantini said that “…One of them is the physicality in VR, as well as combat, exploration, and locomotion. Everybody’s kind of reinventing the wheel in their own ways and learning from each other. It’s not like making a shooter on a flat screen with so much understood, where the players’ expectations are set you know what to do.”

“[With VR] there’s a lot of quick prototyping: if that doesn’t work, trash it, do something new, etc. But that’s what you have to do when you’re cutting edge, right? We feel really good about where we landed and we really listen to how players responded during user testing,” he continued.

That attention to physicality has resulted in some elements aimed to draw the player in. “I think one thing you’ll find in this game that you haven’t really experienced in any of the VR game is when you’re sinking that blade in the Walker skull, you really have to work at it, and then it’s stuck and you have to pull it back out. We not only want the combat to be realistic, but we wanted it to be really grounded in reality. We wanted every Walker kill and every human interaction to feel very dangerous,” said Constantini.

This sense of physical reality within the VR world helps to give the player a very tangible feeling and a strong connection as they explore, but it’s only a part of how the game aims to be immersive. A big appeal of what originally made The Walking Dead (the comic and the Telltale series) connect so deeply with their audiences was the human drama of the action, which Skydance Interactive also wanted to capture.

To do this, they would allow the player to hurt or help whoever they chose to. “Other areas that were a big challenge that we think is paid off is this commitment to allow the player to be free and make choices in a very fluid way,” said Constantini. “It’s not like you’re on a quest path and you only have two options. You can do whatever you want, whenever you want, to whoever you want and that’s true to The Walking Dead.”

“What’s also true for The Walking Dead is that there are always consequences. Making the game suitably robust enough and having the narrative written in a way that holds up enough to any kind of player behavior was a real challenge, but we’ve got the game in a place that we feel is doing that and we’re really excited about it. Not only has no VR game really done it quite like what we’re doing but I don’t know of any game that has done it quite this open where there’s really no one you could meet that you can’t kill,” he continued.

Being empowered to make decisions that could have grave consequences would be what made Telltale’s The Walking Dead into an award-winning series, and Skydance Interactive are looking to capture that same feeling of real human drama and difficult choices with their own work. Not only this, but with the connecting power of VR, they’re looking to make players truly feel the emotions a character would go through as they sought to save or slaughter.

While zombie games may not be as popular now as they were at the start of the decade, Skydance Interactive are poised to give the genre a comeback. By building on the roots of The Walking Dead’s appeal, the genre itself, and offering a visceral connection through VR, they hope to give players an experience they will find hard to put down. The Walking Dead: Saints and Sinners hits Steam and the Oculus Store on January 23 and is available for pre-order now.

Disclosure: Skydance Interactive is a client of Greenlit Content, parent company of GameDaily