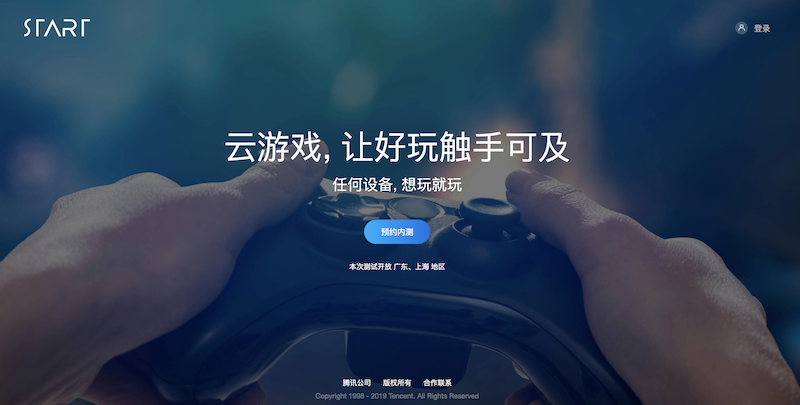 Earlier this month, media giant Tencent Games launched the beta version of its START cloud gaming service in China. According to a tweet from Daniel Ahmad, senior analyst at Niko Partners, Blade & Soul was the first game available on the service, and was followed up yesterday with Fortnite, Path of Exile, and NBA2K Online2.

“Tencent START is the company's cloud gaming service that integrates with WeGame, its PC game distribution platform, to offer cloud versions of PC games,” Ahmad explained. “Players with 20-plus Mbps internet speed and from [Beijing, Shanghai, Guangdong, Jiangsu, Tianjin, Hebei, and Anhui] can take part in the trial to play these games.”

According to Ahmad, this is the first time that Fortnite is being offered natively on a cloud gaming platform, marking an enormous step forward for cloud gaming in Asia, even if the game is not approved for monetization.

“Tencent is trialing its START cloud gaming service with a handful of titles through February 2020 in order to test and refine the service ahead of a full commercial launch next year,” Ahmad told GameDaily. “Whilst Fortnite is one of the games participating in the trial, we note that the game is not approved for monetisation in China and therefore would need to receive a license before Tencent can start generating revenue from the game.”

The START platform currently integrates with WeGame, Tencent’s PC games distribution platform. Ahmad said that the company already possesses a license for monetization within the country, but there’s still the notoriously strict and government-run games approval process to deal with. Once a game makes it through, though, it should be a simple matter for players to start cloud games from within the START client.

START is being launched via a partnership with Nvidia, which, Ahmad said, gives Tencent access to some quality hardware. “Tencent will be able to utilise Nvidia’s high end GPUs through its partnership, enabling cloud game players to experience high end graphics, smooth frame rates and additional features such as ray tracing,” he said.

Part of the deal with Nvidia also includes "a joint innovation lab for gaming" to "explore new applications for AI in games, game engine optimizations and new lighting techniques including ray tracing and light baking."

“As one of the leading global platforms for game development, publishing and operations, Tencent Games is set to deliver amazing cloud gaming,” Jeff Fisher, senior vice president of gaming at Nvidia, said in a statement. “Combining the Tencent platform with Nvidia’s GPU technology will provide a world-class experience for gamers everywhere.”

Tencent has been making big moves in gaming, including gaining majority control over Supercell in October, purchasing Sharkmob in May, and buying 29% of Funcom in September. The company now owns major stakes in Activision Blizzard, Epic Games, Riot Games, Ubisoft, and many more. The START cloud gaming platform could be one of its most significant projects yet, though, and will likely be a boon for Tencent’s efforts to shake up the video game industry in China.

“We believe that China will become the largest cloud game market by 2023 as 5G and new business models for cloud services enable mobile gamers to play cloud games,” Ahmad predicted. “Tencent is uniquely positioned to offer a complete cloud gaming solution due to its large games library, cloud backend and distribution platforms such as WeGame and WeChat.”

Tencent has been on an absolute tear over the last several years, and it appears that it has no plans to slow its momentum. As cloud gaming continues to grow in prominence, Tencent is poised to tap into the largest market in the world. And with a monetization license already in place, the company certainly has a leg up on the competition.