Telltale 2.0: 'We cannot right the wrongs of the former company' 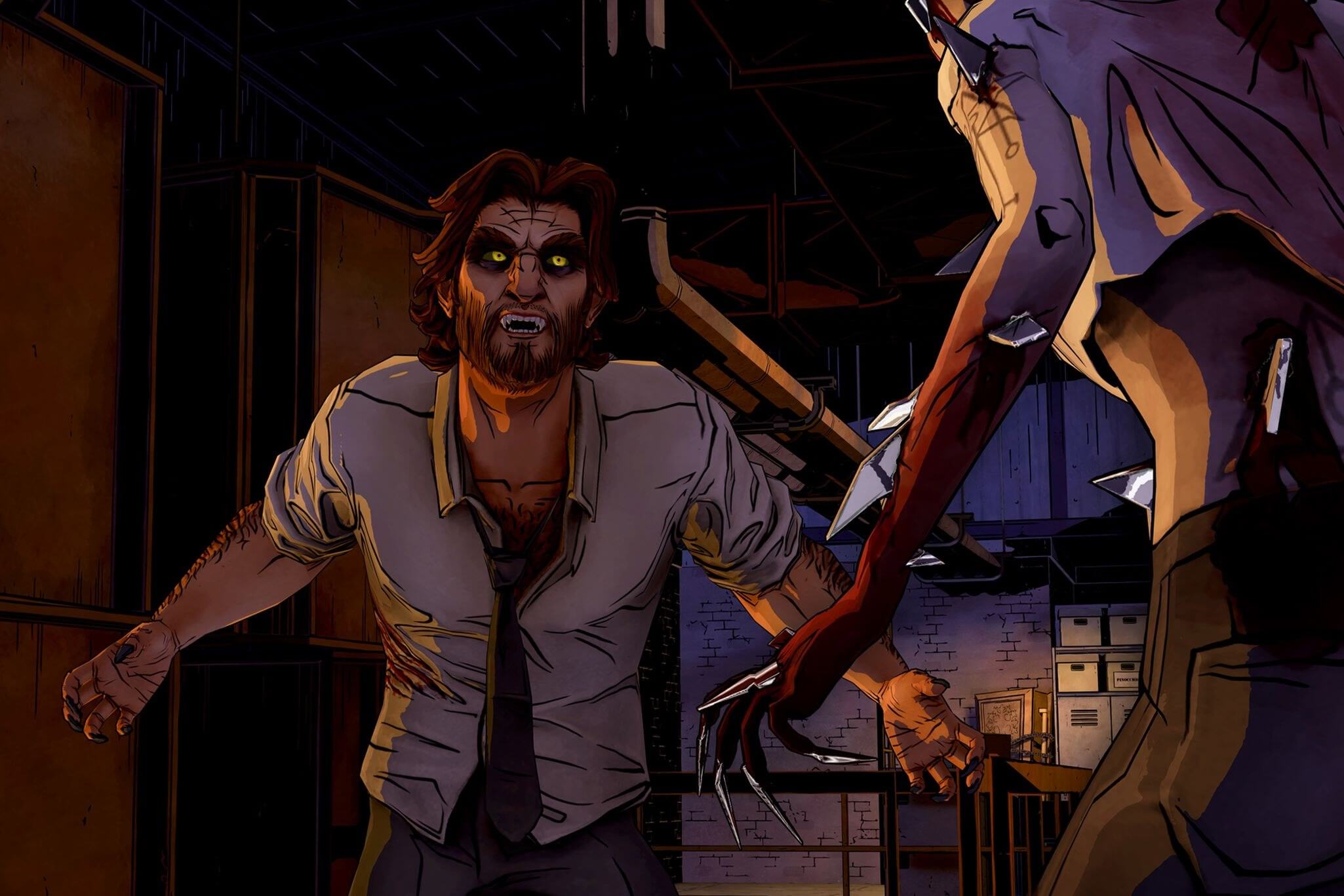 For nearly 15 years, Telltale Games was a staple of the industry, producing adventure games and narrative-driven experiences unlike any other studio. Then, in September of 2018, the rug was pulled out from beneath the developer’s feet, as 250 staff and contractors were laid off without severance, and by November a liquidation process had begun. It’s been a somber year, but in August, there was at least a glimmer of hope as LCG Entertainment acquired the Telltale name and some of its back catalog while vowing to treat the fanbase and its employees with respect.

Telltale 2.0 has faced enormous skepticism right out of the gate. At the time of the brand revival, a number of former Telltale employees said the new owners should pay off the debts of the original management, while others called for a boycott. Then, only a few days ago at The Game Awards, the new Telltale revealed The Wolf Among Us 2, which once again caused a mixture of excitement, apprehension, and other emotions.

“I am normally super positive about stuff but I cannot help but be super skeptical about a ‘’Telltale game,” commented Vlambeer’s Rami Ismail on Twitter.

For former Telltale employees, the wound is understandably still raw. Former lead writer Jess Krause tweeted at the unveiling of the sequel, “I’ve cried on the phone with friends and have had some hot chocolate. Deep breaths.

“I’m really happy for the guys at AdHoc. I know they’ll make something amazing, since they all worked on the first season back in the day. They have nothing but my love and well wishes. I am also very sad for our team, who worked so hard to get our project off the ground after we all lost our jobs. You guys don’t even know how hard they worked for it, because we all believed so much in our little game.”

As Krause alluded to, AdHoc is comprised of former Telltale staff and are spearheading the narrative and cinematic parts of development, with the new Telltale handling all other aspects of development. Rather than continue development on the project where the previous team left off, new Telltale CEO Jamie Ottilie has indicated that The Wolf Among Us 2 is starting its development over from scratch. He wants the new team to have a “clean slate” to work with.

In an interview with GameDaily this week, Ottilie expressed both understanding and frustration for the current situation the new Telltale Games finds itself in. While he wishes he could hire back all those who were affected, it’s not economically feasible. And he doesn’t believe it’s fair to be judged for mistakes made by the old company he had nothing to do with.

“The best way to address the skeptics is to do our jobs and make a great game,” he stated. “We’re really just ignoring those who want to spin things negatively, and focusing on the game. I’d say our message would be ‘Give us some time to ramp up and then judge us by the work we do, not by a past over which we had no part or control’.”

He added that unlike the old Telltale, the new company is going to be very careful not to grow too big: “Our growth target is 30-35 people in 2020. We’ve partnered with AdHoc specifically to bring back the former Telltale creative team from Wolf 1. We hired Zac Litton, former VP of Engineering, as CTO to head up the tool and pipeline creation, and Sara Guinness is our Director of Operations. We’re currently working with several former Telltale people on a freelance basis and will be opening up full-time positions sometime in January. As we’ve previously said, we’re taking a measured approach to growth and are focused on bringing in the right people at the right time in production.”

The freelance approach is something that has rubbed some former Telltale employees the wrong way. As noted by Krause on Twitter, “If this new Telltale really wants to bring back the studio and are genuine in their intents, then I honestly hope it works out. But hiring former devs on a freelance basis in the most expensive part of the country doesn’t really encourage me that much.”

When GameDaily pushed on the freelance scenario, Ottilie pushed back: “We are focused on hiring the right talent for each role - people committed to making great games in the style for which Telltale is renowned. But, to set the record straight, we aren’t going to create unnecessary jobs for the purpose of hiring former Telltale employees. As much as we dislike what happened to that talented team, we cannot right the wrongs of the former company. We're building a new Telltale to make great games and tell interesting stories. We'll hire the best people we can for every role that we open and, yes, many of the people we are talking to or are interested in working with are former TTG employees...

“Most of the freelancers we've worked with over the last six months are former Telltale employees -- and are quite happy about how they've been treated by us. Beyond that, we can’t get distracted with what anyone on Twitter thinks of our hiring practices. What matters is how the people we hire actually are treated, the company culture we are building, and ensuring that we are working with the best people in each role.”

Company culture, especially at the outset when launching a studio, is absolutely critical to success. Part of a healthy culture is ensuring that developers are treated the right way, as former Telltale narrative designer Emily Grace Buck commented to Polygon: “I’m happy that the games we made will once again be for sale, and I’m happy that the IP aren’t dead in the water. But more than anything else, I hope beyond hope that this new Telltale will treat its employees better than its predecessor. Because games aren’t made by brand logos that you can buy. They’re made by people who deserve care.”

To his credit, Ottilie seems to have received this message loud and clear. He believes that the members of the new Telltale need to have lives outside the studio.

“Our approach is pretty simple. Hire the best people you can for every role. Empower them to do their jobs. Provide them with an environment where being great at what you do is recognized and rewarded,” he said. “Create a culture where people want to contribute their best, but also recognizes they have lives in which they need to be happy. In short, ‘come to work, do good stuff while you are here, then go home and have a life – be happy’.”

The spectre of crunch continues to be a problem in this industry, but Ottilie wants to ensure that the new Telltale is doing things in a sustainable manner, and a big part of that means not biting off more than you can chew -- whether on an individual basis or collectively as a studio.

“When we talk about sustainability, we are really speaking to controlling headcount and costs, and ensuring that we don’t grow too fast and outpace our cashflow and funding. It also means we are applying modern production methodologies to the overall structure of the company. We are building a small, focused and talented team internally, and we will support that by partnering with the right companies and individuals on a per project basis,” he said.

The new Telltale is definitely taking a different approach to development processes too. And that could mean taking some creative risks.

“From a development perspective, we’re doing things pretty differently. We are using a new engine, and building a new tool and pipeline. We are creating a hub and spoke production model that will see teams all over the world contributing to the game,” Ottilie explained. “For the players, well – you will have to wait and see, but we have some pretty interesting thoughts on gameplay and interaction. The [new Wolf Among Us] game will look like a Telltale game, but there will also be some innovation here.”

The episodic model that Telltale pioneered could be changing too, or at the very least, it will on the development side. “We are creating the stories episodically, but how they will be released is still to be determined. I think the important distinction here is that we will no longer be developing episodically. If we do release the game in episodes, all of them will be ready before the first one hits the store,” Ottilie clarified.

Given the love for the first Wolf, and the skepticism around the new Telltale, there’s inherently a certain amount of pressure surrounding the project. Ottilie doesn’t see the pressure being any greater than it would be for other games though.

“All games are challenging but we feel pretty good about where we are headed with Wolf 2,” he commented. “This might sound a bit cliché, but so many things have come together when we needed them to in order to make all of this happen that we know we are on the right path. The problems we face are no different than any game in development faces, but everyone in a leadership role on this project is a veteran who knows how to get their game done. We just need time and space to do our jobs. Beyond that, we really aren’t talking any further about the story or the game yet. More details will emerge over the next year.”

Wolf 2 won’t release in 2020, and when it does, it’ll be on multiple platforms but exclusive to Epic Games Store on PC, which Ottilie said was happening “because we believe in what they are doing, where they are headed, and because Epic believes in us and Wolf 2.”

Telltale released Batman The Telltale Series Shadows Edition this week with the help of Athlon Games, which was named as a shareholder and as publisher of record for Telltale's existing IP during the Telltale brand acquisition. While many of the old Telltale’s biggest games came from IP that the new company no longer has rights to, Telltale 2.0 does have plans to dig into what it has retained, whether that’s more Wolf, Batman, or Puzzle Agent.

Ottilie wouldn’t give us any clues as to what’s next, and it’s entirely possible that he’s still figuring it out. “It is way too early for us to talk about what comes after Wolf. We obviously love Batman and have a good relationship with Warner and DC, but there are other IPs in the world we’re also interested in. What comes next likely depends on who we decide to build the game with. The winning formula really is matching the right IP with the right visionaries,” he said.

The new Telltale has a lot to live up to. For now, Ottilie would simply like to be given the benefit of the doubt instead of being labeled a wolf in sheep’s clothing.