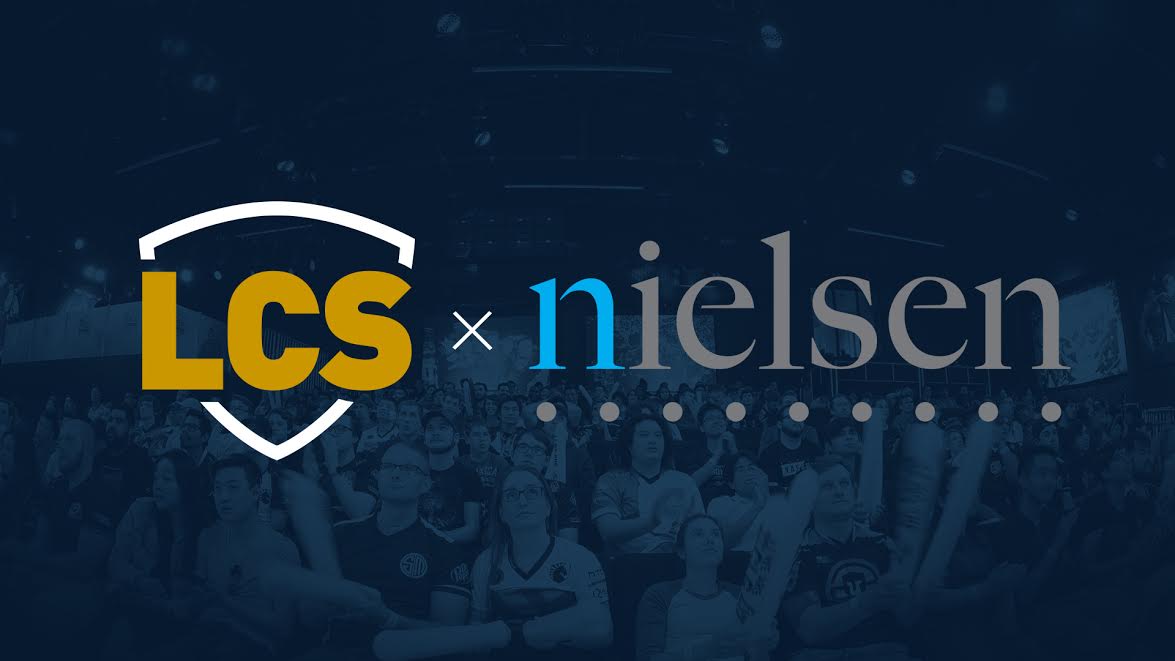 League of Legends developer Riot Games and data analysis firm Nielsen have announced an extension of an existing partnership aimed at collecting viewership numbers for League esports. The newly-added layer to this partnership will see the development of a “live+” measurement system for esports broadcasts and the subsequent on-demand replay videos.

“Nielsen is spearheading great innovation in the esports space and LCS is honored to be a partner in this unprecedented effort,” Matthew Archambault, head of esports partnerships at Riot Games said in a statement. “Reliable, accurate viewership data and analytics are critical to anyone in media, and Nielsen’s methodologies, demonstrated through traditional broadcast media, are the gold standard. We’re excited to be able to bring these insights to our LCS partners and the larger community, further defining the engagement of our fans and that of the esports community.”

Nielsen will be adapting its Live+ television aggregation methodologies to calculate the total audience numbers for esports broadcasts, both live and otherwise. These metrics, Nielsen said, can help Riot engage better with League of Legends fans.

“We’re excited to continue to drive new ways of understanding esports fans’ content consumption, and looking at LCS viewership through the lens of live+ audience data is another key step in these efforts,'' Nicole Pike, managing director of Nielsen Esports said in a statement. “Building on the foundational AMA [average minute audience, ed.] metric that Riot Games has quickly adopted, we are now working with the LCS team to understand how time-shifted viewing plays into League of Legends fans’ experience--and how it expands the audience Riot can reach with its content.”

A Riot spokesperson representing the League Championship Series told Gamedaily that the live+ metric provides a more complete picture of viewer engagement with a particular piece of televised content because it combines live viewership metrics with video-on-demand replay viewership for a certain window of time following the initial broadcast.

“LCS fans are similar to TV viewers in this way--many people will tune in for a live broadcast, but having VODs up afterwards is also essential for thousands and thousands who couldn’t watch the broadcast or want to review what happened,” the spokesperson said. “This means a live+ metric for LCS content would be just as valuable as it is for TV, and it would be relatively straightforward to create a similar metric for esports content. The major difference is the viewership platform or medium, and while online streaming is not as established as television, LCS has the expertise in the space to support Nielsen in developing live+ for esports.”

For Riot, the partnership with Nielsen represents great potential for the growth of the LCS, especially when it comes to understanding the content fans choose to engage with, and how they access it.

“At this point, we believe the growth in LCS viewership through post-match VOD viewing shows that the esports community finds on-demand content valuable, confirming that it’s important to use a metric that includes post-broadcast viewership,” the spokesperson said. “Once we’re confident in our findings, the insights will be helpful for our understanding of the LCS audience and the way they watch esports. We incorporate our understanding of the community into many aspects of planning LCS’ future.”

Riot also hopes that this initiative can foster transparency in the esports sector.

“This is a key milestone for the esports ecosystem as it strives for continued transparency around viewership. As the industry matures, we anticipate these analytics to be a core baseline for continued growth and for understanding our viewers and players,” Riot said.

For Doron Nir, CEO of livestreaming tools and services provider StreamElements, the partnership between Nielsen and Riot represents not only the growing importance of understanding market audiences, but also makes a case to potential investors.

“The barometer of success for any marketing campaign is always going to be measurement,” Nir told GameDaily. “This is also the key hook for companies who are looking to invest in an industry. Therefore, the more measurement that exists around the esports industry, the better its chances are of attracting more investors and brands to help grow the space.”

According to StreamElements’ and Arsenal.gg’s February “State of the Stream” report, League of Legends was watched for nearly 94 million hours on Twitch last month, a 27% bump up from December, driven by the start of the LCS season. If these numbers are to be believed, Nielsen has its work cut out for it.

The size of esports’ viewership is made all the more impressive when put in context: according to the announcement press release, the LCS is the third most popular professional sports league in the US among 18- to 34-year-olds. For Nir, this is a figure that points to a very bright future for an industry that is projected to break $1.1 billion this year. However, many analysts should keep their excitement in check.

"There is no question that esports is a thriving and growing industry that rivals many traditional sports, and could eventually be our national pastime,” Nir said. “But in terms of current viewership on livestreaming platforms, it still makes up a minority of overall hours watched. If you looked at the top 200 channels watched in 2019, over 1.7 billion more hours were spent viewing non-esports content. The message to brands is that while live esports event streams are great for a moment-in-time campaign, a more sustainable long term strategy should focus on non-esports content creators."

Still, there’s no denying the global appeal of esports. Every year, The Invitational, the premiere Dota 2 tournament, brings in loads of viewers who want to watch teams compete over the ever-growing prize pool--last year’s event boasted a prize pool of nearly $35 million. And if League of Legends is indeed the third most popular pro sports league in the US, there’s no telling just how popular esports can become over the next several years. Truly, the rise in esports is one of the more fascinating trends the games industry has to offer.