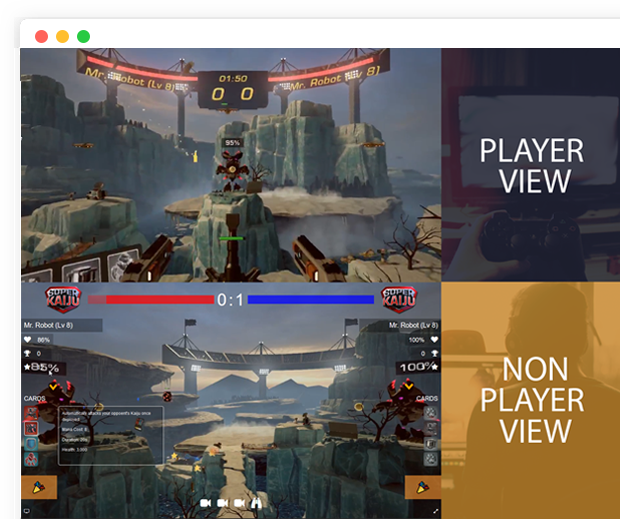 “The most interesting thing about this funding was the diversity and level of the investors,” David Cole, analyst at DFC Intelligence, told GameDaily. “The Twitch of China, the broadband provider of Japan, and the consumer electronics giant of South Korea. That was impressive.”

Genvid provides a suite of tools that allows viewers of livestreams to interact with the game they’re watching. By downloading Genvid’s software development kit (SDK), developers can integrate it into their games and let viewers buy into an interactive experience. For a fee, users can gain access to free-moving in-game cameras among other interactive benefits.

Cole said that Genvid appeals to investors because it’s focused on a new way to monetize the viewership of game streams.

“[Genvid is] focused on a new way to monetize an audience that is not being monetized,” he explained. “If you think of a sport like baseball, basketball, or soccer, you have a few people who play it professionally, you have significantly more that play it on a casual basis, but you have way more that simply watch others play the sport. Money is made based on how many people watch the sport, not how many people actually play it. In the U.S., football is the most popular sport but probably the one least played by viewers. If the same mechanic can be true for games it will increase revenue.”

In this way, Genvid has the potential to allow devs and publishers to tap into a brand new source of revenue. Cole likened it to how advertisers flocked to esports as that market has grown throughout the years.

“The idea is that Genvid provides technology that allows developers to enhance the viewer experience,” Cole said. “That can be from custom camera views, detailed stats, cheering specific players or teams or more. Of course, there is potential to charge viewers for those activities. This makes esports about much more than just advertising and sponsorship. You can sell the virtual equivalent of front row seats.”

For Cole, interactivity in streaming has a great deal of growth potential, but it’s up to developers to figure out how to attract users.

“Genvid isn't a service but instead a technology that developers can implement as they see fit. Of course, it will take a great deal of experimentation to figure out what works. Interactive streaming I think has a major future, more so in coming years as publishers work out how best it is implemented,” he said.

Given the effects of the COVID-19 pandemic and global quarantine efforts, now is an interesting time for the livestreaming landscape. Cole expects that the general streaming audience will indeed see short-term growth during the scare, but it could lead to some far reaching trends.

“As for current quarantine issues, I think it is more short-term,” Cole predicted. “There should be a spike in streaming with levels going back down as things return to normal. However, it is the type of spike that gets more people involved in streaming and thus leads to long-term growth.”

“The livestreaming and content creation space is going to be hotter than ever based on its current momentum,” Nir told GameDaily. “A bi-product of this calamitous situation that the world is currently facing is the power of livestreamed entertainment has taken center stage."

Right now, there are five upcoming games that will support the integration of Genvid’s tools: Deadhaus Sonata, In the Black, Retroit, Demolition Robots KK, and Don Swagger.Moving forward, it will be interesting to track the technology’s adoption into the greater streaming landscape. There’s no guarantee that viewers will take to such a product, but where there’s a chance to monetize something, you can bet large corporations will at least make an effort to capitalize.