PS5 deep tech talk is a love letter to devs, but did Sony miss a marketing opportunity? 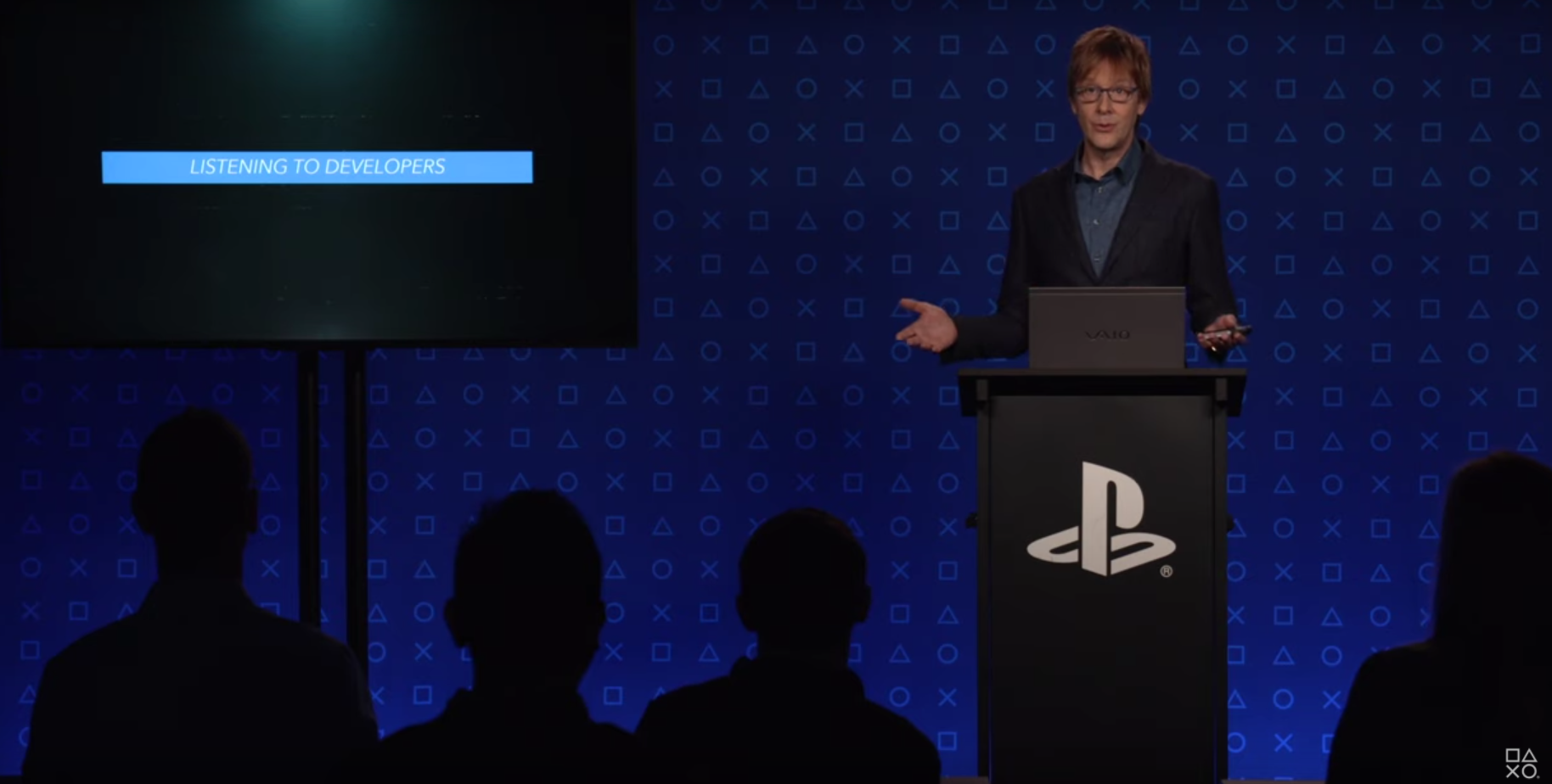 PlayStation fans have been clamoring for a full PS5 reveal for months now, especially in light of the continual drip feed of information from Microsoft on the Xbox Series X. Today, Sony did present some fascinating insights into how they approached the design of a brand-new PlayStation console, but it certainly wasn’t a presentation made with players in mind. That may have been due to it likely having been planned out for GDC originally, but with GDC having been postponed and Sony streaming this to everyone on YouTube, the tech heavy nature certainly struck an odd tone for most.

As Kotaku reporter Jason Schreier noted on Twitter, “Seems like a bad marketing move to release a technical spec sheet that looks significantly worse than your biggest competitor's, then put out an incomprehensible hour-long lecture video rather than showing actual game footage to demonstrate what makes your console unique but hey.”

In an email to GameDaily, Kantan Games analyst Dr. Serkan Toto commented, “The video was extremely developer-centric, but Sony said as much before. But of course, a lot of people are now disappointed. In my view, Sony should have had a consumer reveal first and then take a deep dive into the technology for developers. Very strange approach, and it looks like it is because Sony felt pressure after Microsoft's information blitz earlier this week.

“Too many questions are still unanswered: What about the price of the device? What does it look like? When is the launch? What games will we get? Will there be further innovation, for example as with the PS5 controller?”

The lecture from PS5 lead architect Mark Cerny certainly wasn’t light on information; it’s just that it was all kinds of technically deep information that would go over the heads of most PlayStation fans. That said, from a console engineering perspective, it was fascinating to hear Sony’s approach to design, and there were a few key takeaways from the talk that Cerny made sure to stress.

One big point for Cerny was that he and the entire PlayStation team have been actively talking to and listening to the game development community. He said that he’s been on a tour, actively discussing with hundreds of people at dozens of developers and publishers to get their feedback on what they want in a next-gen PlayStation. The number one requested feature was a super fast SSD drive. PS5 is targeting 5GB/s loading times with the SSD, which means that load times should be almost instantaneous and fast travel systems will actually work in the blink of an eye. Moreover, because the SSD can load in things so quickly, it acts almost like RAM, freeing up the PS5’s 16GB of GDDR6 to be used more effectively in games. Cerny said that while the old HDD on the PS4 could “sabotage a game creator’s vision,” with the PS5 it’s now all about “finding your dreams.”

As you can see in the technical specs outlined below (courtesy of Eurogamer), the PS5 has around 10.3 teraflops of power compared to the Xbox Series X’s 12 teraflops, but that one specification alone doesn’t determine how good games will look, how easy a system will be to design for, or exactly how the console will perform.

Cerny remarked that Sony’s goal with PS5 was to carefully balance revolution with evolution. So, for example, with the choice of that 10 teraflop GPU, Cerny noted that he and the PlayStation team had to think about minimizing the dead time a developer would be facing when starting development. He acknowledged feeling the “most tension” with the GPU, but what they arrived at should bring the dead time, while a developer gets familiar with the new hardware, down to just one month. He also remarked that it’s “dangerous” to rely on teraflops as an indicator of performance.

Sony also reiterated that they are taking backwards compatibility seriously on PS5. Cerny noted that his team has been looking at the top 100 most played PS4 titles and that they should all be playable on PS5 out of the gate. Moreover, while PS4 engines will run just fine on PS5, he said, the PS5 “presents an opportunity,” presumably to upgrade how older PS4 games look by adding in new features like raytracing (something we’ve seen Xbox talk about on Series X as well).

Another notable tidbit was Cerny’s concession that Sony hasn’t always done the best job at handling power consumption and heat generation. Power consumption can vary a lot from game to game, but as many of us have heard the PS4’s fan spinning up tremendously during intense games like God of War, the fact that Sony is cognizant of the need to address this should be welcomed. Cerny said they estimated for the “worst case scene” possible in future PS5 game and designed the console to have the power and cooling to handle that. With PS5, Cerny explained, the CPU and GPU will basically run continuously in boost mode, so the system is running at constant power, but it’s the frequency that will vary based on workload. He said that the GPU frequency will be capped at 2.2GHz with the CPU capped at 3.5 GHz.

The last major focus, and one that clearly got Cerny very excited, was on drastically improving the audio capabilities of a PlayStation console. Cerny talked at length about spatial audio and how PS5 will be designed to provide a more immersive virtual surround sound experience. He said that the PSVR headset actually provided a hint as to where Sony could go with audio, and the team wanted every sound to have a sense of dimensionality. He said it’s like “you’re actually there, you’ve entered the Matrix.” Cerny added that headphone audio implementation is largely complete but it could take more time for TVs and speaker sets to be optimized for PS5’s new spatial audio technology.

Sony needs content to drive its PlayStation ecosystem as it heads towards next-gen, and perhaps Cerny’s impassioned talk on technical details will win over some studios, but the expectations mismatch for fans is where the problems set in.

“This talk was never going to be about pricing, games, exact launch date or even a reveal of the actual PS5. However, those are the areas that most consumers want to know about, so those watching expecting something different will feel a bit bemused,” Piers Harding-Rolls, head of games research at Ampere Analysis told us. “I don’t think it will be long until Sony reveals the form factor, launch games and pricing, but that is likely to depend on coronavirus and how the pandemic evolves over the coming weeks.

“I think Mark Cerny did an excellent job of presenting the reasons why the PS5 tech is the way it is. There was a lot of focus on the capability of the SSD and how that impacts usability for the consumer and choices for developers. It’s nice to see some difference in approach here between Sony and Microsoft. It was great to see backwards compatibility for PS4 titles fully confirmed and that most of the most played PS4 games will be supported at launch. That’s a big step for Sony and is baked into the hardware. Overall, backwards compatibility removes some of the barriers of the consumer transition from PS4 to PS5. Lastly, 3D audio is an interesting area and audio is certainly one area which consoles could make significant progress on over the next-generation.”

For Lewis Ward, IDC games research director, while fans may have wanted other key details laid out more plainly, there is plenty of value in a tech talk like we just saw from Cerny. “The tech geeks will be all over this. They will tear this apart vs Xbox Series X and come up with a ‘winner.’ This is a critically important basis for armchair pundits (like me) to come up with a take and that will set the initial expectation that general console fans will read and hear about for weeks to come,” he noted.

Ward believes that Cerny’s talk also hints at a couple other important pieces of information. “There’s most definitely an updated PSVR coming out, probably in 2021, that will take full advantage of the custom Tempest 3D AudioTech. I’m a big believer that quality spatial audio is an underappreciated aspect of what sets AAA games apart from the competition,” he added.

“[Also] a headline for me is that we now know PS5 will launch this holiday season worldwide, regardless of where the COVID-19 pandemic goes from here,” he said.

With events canceled worldwide, video presentations will take on a greater importance than ever before. Sony has ample time to present several highly polished, consumer-focused streams for its fans to showcase exactly what the PS5 will be able to do and how the games will play. Meanwhile, we know that Xbox is already planning much more, including a digital presentation during what would have been E3 week. The next-gen battle is only just getting started.