GDC 2020: How developers are making games in an influencer-dominated environment 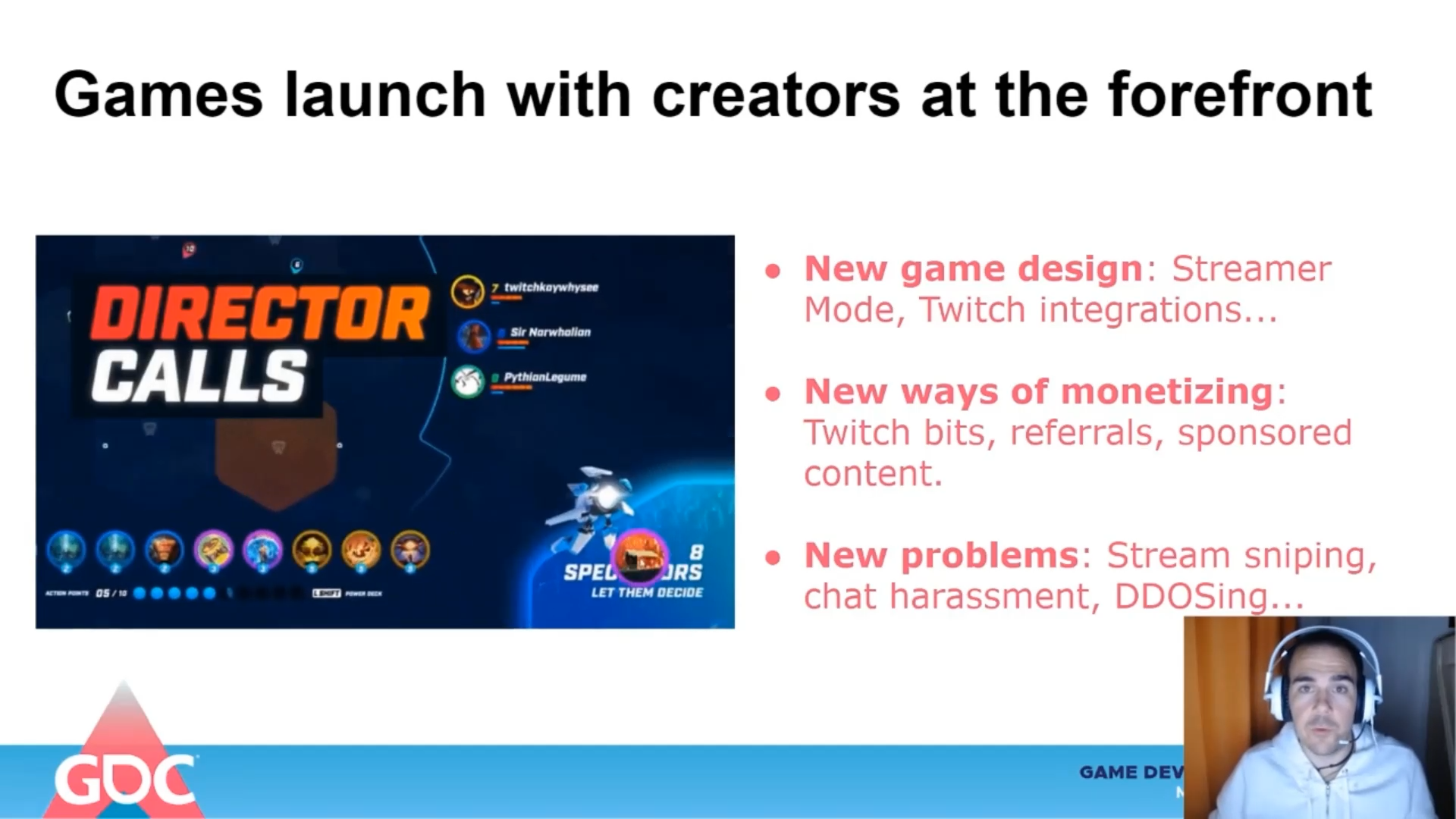 Over the last few years, the games market has become very influencer-driven. Livestreamers and YouTubers command enormous audiences. As content creators have exploded in popularity, many publishers and developers are leveraging their audiences in an effort to grow their own. Today, a number of high-profile game releases include this consideration from the ground up, which was the topic of a virtual GDC talk from David Ortiz Lapaz, communications director at consulting firm ICO Partners.

If you still need convincing that influencers are more important than ever, you don’t need to look any further than the stealth launch of Respawn and EA’s Apex Legends. According to Lapaz, the battle royale game commanded 2.5 million players in its first 24 hours on the market, which climbed to 25 million in a week’s time. To-date, Apex has over 70 million players.

Influencer marketing, Lapaz said, represents the combined efforts of both the development and marketing teams.

“Right now, games are launching with content creators at the forefront,” he explained. “This involves adding new mechanics specifically designed for content creators, like streamer modes, Twitch integrations, and also addons baked into the game.”

With this newfound consideration of content creators comes more methods of monetizing streaming audiences, Lapaz said. For example, viewers can pay real money for bits, Twitch’s premium chat currency. This also comes along with a few new problems, though, including stream sniping and chat harassment.

To ensure the smooth integration of influencer marketing into games, Lapaz offered a number of steps developers can take at various stages of a project’s life. These steps are based around eight principles of marketing and development that can dictate the success or failure of a studio’s efforts. These are narratives, ownership, fan and creator support, experiences, emotion, fun, and living in the moment. Applying these principles can be tricky, Lapaz said, but they can certainly propel a game to success in today’s influencer-first environment.

He explained that one potential creator-focused feature developers can include in their games is social tools. These include things like friends lists, as well as guilds and clans.

“These are systems that let people play with each other,” Lapaz said. “The key for these features is that they allow content creators to invite and create their own communities with their audiences if they want, which in turn allows them to make the most of the game. They also add a lot of replayability because they come back to the game...and at any time have people to play with, and [that] helps them to produce content for longer.”

When implementing such tools, Lapaz said it’s important for developers to keep their design simple and intuitive. As good examples, he pointed to the ease with which Apex Legends allows players to join parties,and to the community-driven clans of Clash Royale.

Another influencer-based tactic that developers can employ is to offer creators early access to game content. Lapaz said that this can take the form of a beta or a private branch of a game.

“By giving creators early access to content, you let them have day-one content ready, which can help with the spikes you see when you launch the game or launch an update, because there’s content readily available for people to consume on YouTube or Twitch,” he said. “This also can help you with guides the moment the content goes live, and it lets content creators become experts.”

In order for developers to take full advantage of the previous two examples, they must be implemented before a game’s launch, Lapaz explained. But there are some things that can only be done in a post-launch environment. This includes creating customized in-game items based on specific content creators. For example, custom gun skins themed around Shroud or DrDisrespect in PlayerUnknown’s Battlegrounds.

“This is very low-hanging fruit,” Lapaz admitted. “The benefit of having something like this is that it connects the streamers and content creators more with the game. In turn, it helps the community be more engaged with the game.”

Additionally, the marketing benefits of this tactic can be swift and substantial if developers and creators monetize these items.

Custom game modes are another way for streamers to engage with their audiences. Games like Overwatch feature in-game editors that allow creators to modify a game’s rules. This can empower narratives, Lapaz said, as creators and their audiences engage in unique gameplay experiences.

“The deeper the customization options, the better,” Lapaz explained. “They can modify the rules of the game in more ways and make it more fun to watch. Basically, this option exposes the key aspects of the game, and content creators can effectively have their own version of the game.”

While Lapaz’s talk concentrated on ways developers can use influencers to inform the features available in a game, he said that there are a number of pitfalls to avoid.

“Be wary of building the game only for content creators,” he said. “The game needs to stand by itself regardless of a creator's audience. Relying solely on creators launching the game can be done, like with Apex. The conversion rate can be great, but [players] are unlikely to stay in the game in the long run. You’re going to need a full mix of marketing behind it.”

The big picture boils down to this: influencers are more important than ever, and hold the keys to some very large audiences. Understandably, more and more developers are building their games with this in mind, but Lapaz stressed caution in going too far down that road. He predicted that, if the current trends keep up, we could see more content creators turn game consultants, which has the potential to alienate some gamers. Still, there’s no denying that playing a game and watching a stream of it are becoming increasingly intertwined. It will certainly be fascinating to watch this trend evolve over the coming years.