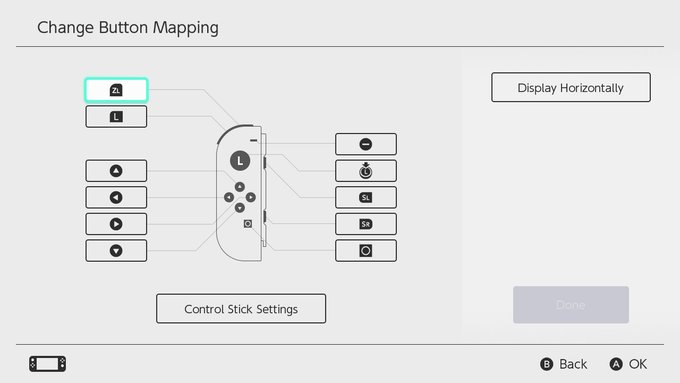 This week, Nintendo rolled out a firmware update for the Switch that adds the ability for users to remap button functionality on the Joy-Con and Pro controllers. With the exception of the Home button, nearly every other input can now be altered and assigned to different actions.

Button remapping is a great way to customize your gameplay experience, but, more importantly, it’s also an important accessibility option for gamers with disabilities. On Twitter, Mark Barlet, founder of advocacy and charity group AbleGamers, praised the new functionality, calling it “fantastic.”

“I'm especially impressed with the orientation settings they have put into place,” Barlet said. “Being able to hold the controller horizontally will help so many people who struggle otherwise. You can also now put it flat on a table and get to more buttons. This is very forward thinking!”

AbleGamers COO Steven Spohn -- who is wheelchair-bound due to Spinal Muscular Atrophy -- echoed Barlet’s praise, but also noted that Nintendo has lapsed when it comes to accessibility options.

“It's exciting to see Nintendo finally decide to jump into the accessibility game,” Spohn told GameDaily. “I put a call out to Nintendo back in 2017 to have them join the ranks of Xbox and PlayStation making gamers with disabilities a priority. I'm sad it took them so long, [but] at least they finally arrived.”

In 2017, when Nintendo announced button remapping capabilities for its motion-controlled boxing game ARMS, Spohn said that adding remapping to only a single game is not true accessibility.

“No. Not even close. Adding accessibility would be system level remapping. This is convenience for one game. Nintendo is still the worst,” Spohn tweeted at the time.

Spohn’s frustration is exacerbated by the fact that, at one point in time, Nintendo seemed to be genuinely interested in accommodating those with disabilities.

“[It] really makes me sad because Nintendo was one of the original proponents of accessibility,” he said. “They made a controller that would fit around your neck and allow you to play if you were profoundly physically disabled and could not use your hands or arms. It was very forward thinking for the time. But since then they have gone far and away from accessibility.”

When the Switch launched in 2017, AbleGamers blasted it in its accessibility evaluation, saying that Nintendo designed the system without any regard for users with disabilities. Writer Josh Zirl called the lack of button remapping and inability to change font sizes disappointing. The Joy-Cons in particular were the target of much of Zirl’s ire. Now, at least, button remapping has become an option with firmware update 10.0.

“They still have a long ways to go,” Spohn noted. “AbleGamers, the largest charity enabling gamers with disabilities to play, works with nearly all of the major players in the game industry but Nintendo is still an island unto itself.”

Meanwhile, Nintendo competitors Sony and Microsoft have taken some large steps toward making games accessible for those with disabilities. On the PlayStation 4, users have the option to remap button functionality on a system level, change text font sizes, have text read aloud, alter screen colors, and more.

Of course, Microsoft made headlines in 2018 with the release of the Xbox Adaptive Controller, a project on which Spohn himself consulted. The breakthrough peripheral allows for an impressive amount of customization that can accommodate a wide range of physical disabilities. The controller has been generally praised by users, and it even won the Golden Joystick award for outstanding contribution.

“Hopefully this is the first step on the way to Nintendo being the leading publisher for accessibility,” Spohn said. “There are so many IPs and virtual worlds that are inaccessible to many gamers with disabilities in the Nintendo universe. I hope one day everyone will be able to play!”

It’s the accessibility options presented by Microsoft and Sony that make Nintendo’s lack of accommodation so disappointing. While it’s nice to finally see some efforts being made in that regard, button remapping feels like the bare minimum Nintendo can offer for a system that was marked as versatile and customizable. Hopefully this move signifies further steps will be taken to ensure that all players can enjoy games.

For more on how Spohn and the team at AbleGamers are attempting to better the games industry, visit Accessible.games.