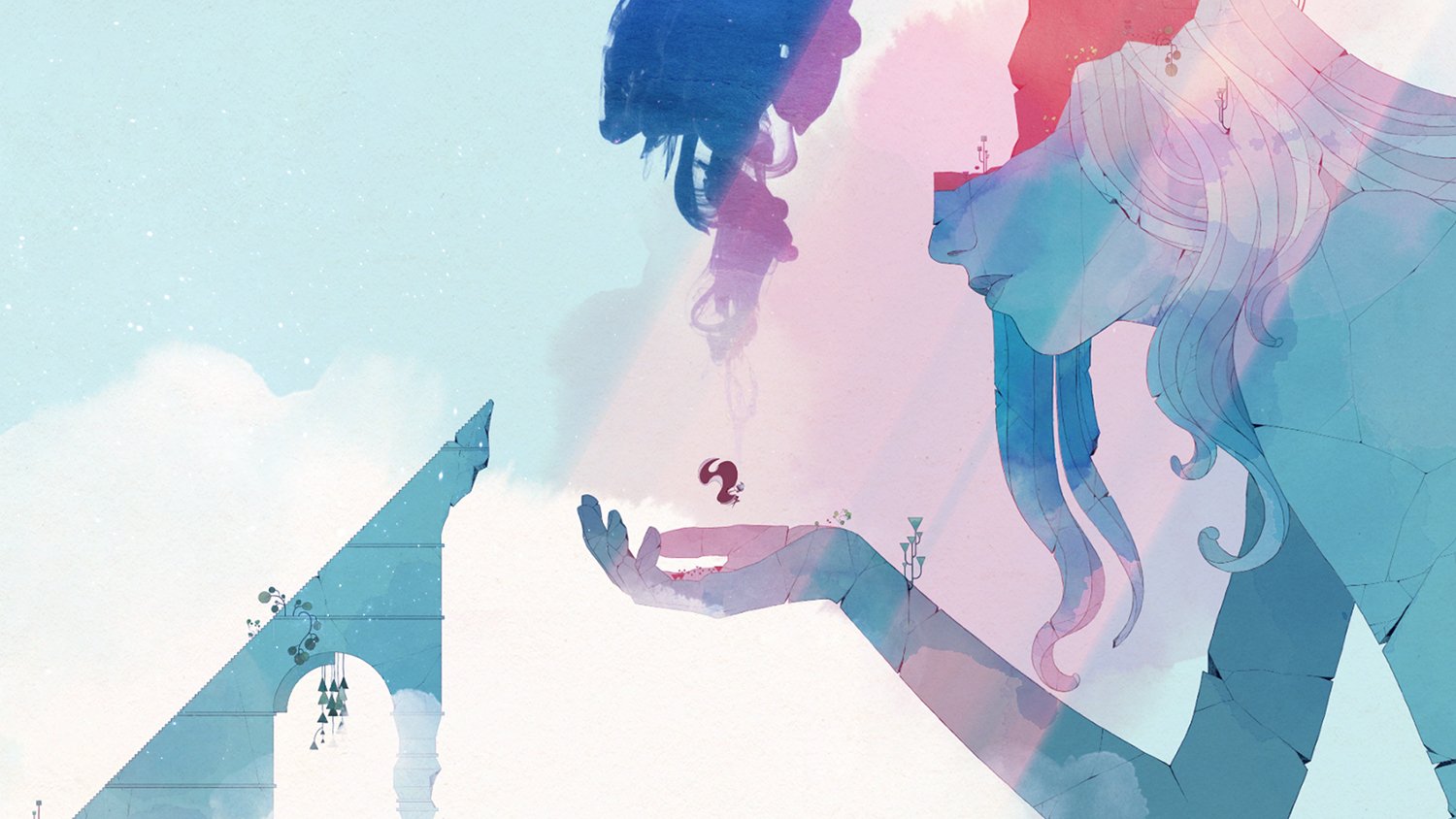 Video games are art. If we questioned the medium’s artistic merits before Devolver Digital’s latest publishing venture, we can do so no longer. Gris, a tale of sorrow and loss, is interactive art from hand-painted brush stroke to hand-painted brush stroke. It plays like a mournful arthouse film — beautiful and soft, even as Gris’ world crumbles and falls around her.

There’s little wonder as to why Gris is art, especially with a number of illustrators and artists (from backgrounds in traditional fine arts and advertising) to fill out the Spanish indie studio, Nomada. The preview event was held at a small art gallery in the East Village in New York City. It was hard to miss the space with the floor to ceiling poster of the game’s main character, Gris, hanging in the window.

The space was moody and a little rough around the edges. The walls were lined with art from the game printed on canvas in a way that kept me guessing about what it was that I was about to see. Gris draws heavy inspiration from a favorite game of mine, Journey, which is also a sorrowful tale that relies on non-verbal storytelling. I talked with Roger Mendoza, one of the co-founders of Nomada Studio, about Gris, working with Devolver, and the importance of letting the player decide what the story is.

Mendoza founded the studio a couple of years ago with Adrian Cuevas and Conrad Roset. Mendoza had wrapped up a number of years working at Ubisoft on Assassin’s Creed and Rainbow Six, whereas Cuevas spent his time on Hitman, Far Cry 3, and Far Cry 4. Roset’s background wasn’t in games, but he’s a lifelong gamer, much like the other two co-founders. Roset’s addition to what would become Nomada was equal parts serendipity and luck.

“We met at a bar, very randomly, it was never supposed to happen,” Mendoza laughed. “But we kind of clicked, and that is when we started working on [Gris]. He had this itch [for] a game [that] starts in black and white, and then you keep on locking colors.”

Gris didn’t stay that way — it evolved and grew, much in the way that games often do when they go through rapid prototyping to pull together the right vertical slice to pitch to publishers. Cuevas and Mendoza needed a change from the triple-A development cycle, though Mendoza was candid about what a great experience working at Ubisoft had been, so they sidestepped into indie development.

“I'm very happy I started with triple-A, in a way, because it allowed me to learn a way to work, and a way to do things that I kind of translated to the company now,” he noted. “So, that's been really helpful. [The stress] is much worse, but I'm much happier now, to be honest.”

It was time to build something smaller, something they all could own. And so, Nomada Studio was formed and Gris was born. The three co-founders started to prototype Gris before presenting it to Devolver during Gamescom in 2016. Mendoza reached out to Andrew Parsons prior to event, hopeful that the indie publisher would have time to meet. And they did.

Story Time: 2yrs ago I received a LinkedIn meeting request from @nomadastudiobcn to enquire about Gamescom. They showed us their prototype in a crowded cafe at the show and we were totally, unreservedly smitten. So wonderful to finally announce Gris: https://t.co/NfKLGVtPxy

“So we meet with them, and we were like, ‘Okay, we'll show the game.’ It was a super cute, super nice meeting, to be honest,” Mendoza said, smiling. “They were very constructive feedback, it was very good. But we left the meeting saying, 'Oh well, we'll keep looking.' And they were interested, which was very surprising for us. It was really nice news, and we started chatting and putting everything together and finally, we signed it off and we were able to build a company and start working on that.”

Spinning up Nomada and spurring Gris’ production onward meant bringing on more help. Nomada has 15 people on Gris and a good number of them are illustrators with disparate (non-gaming) backgrounds. Working with illustrators who didn’t have a background in video games presented its own set of opportunities, especially when it came to testing interaction and user experience.

“It gives us good feedback when playing the game because it's a different point of view, they are not used to video game traditions, or things you would assume they know, because they play video games.”

It was a learning curve for the team, especially for those that hadn’t come from video games (including Roset). But they fell into a rhythm that yielded some of the most beautiful in-game art I’ve ever seen. The visuals and the music (by Berlinist) work in concert to compose a heart-rending narrative experience. And, much like thatgamecompany’s Journey, there are pieces to the story that will never be explicitly told, either through the game or to the press.

“We don't really want to tell any of the backstory of the game,” Mendoza affirmed. “We feel it's better that they build their own story, and sympathize with the game, with their own experiences, and how they feel. There is a backstory, which we kind of hint with symbols ,and there's the art of the game play. That's the story of Gris, who was going through a painful time in life, and see see however she overcomes the situation. We're not ever going to tell what happened or [even] who she is.”

The secret to Gris’ beauty (and how successful the venture has been thus far) can partly be attributed to how Devolver Digital operates with their developers. I asked Mendoza what it was like to work with the indie publisher on the developer side and to my surprise, he seemed a bit reluctant to talk about it.

“So, it's like sometimes, and I say this in the [best] possible way — sometimes you feel like they're not even there,” Mendoza admitted, a bit sheepishly. “[They’re] totally hands off. They don't get into [the minutia]. Of course, they give us feedback and opinions, but they always say, 'It's your game, do whatever you want, if you ever need anything, we're there.'”

The lack of micromanagement and the abundance of trust isn’t surprising. Devolver is the epitome of “trailblazer” in the indie space. It’s how Devolver has ended up with such a sparkling portfolio of games, like Sword of Ditto, Minit, Hotline Miami, The Red Strings Club, Enter The Gungeon, and I Hate Running Backwards.

But Gris isn’t a typical Devolver game, even though most Devolver games aren’t easily categorized in the first place. Gris is lovingly composed, which feels like the unifying element that cements it as a Devolver published title. The games that Devolver invests in are offbeat and sometimes very high concept, but always polished to shine.

Mendoza and his team at Nomada have created something so beautiful, it aches. Even though the game that I saw at the Foley gallery in NYC isn’t a release build, it was clear that Gris means so much to Nomada and Devolver that it couldn’t help but feel good (and challenging) from the height of joy (and the beginning of the game) to the depths of sorrow. Gris will be available this December on Nintendo Switch and PC.