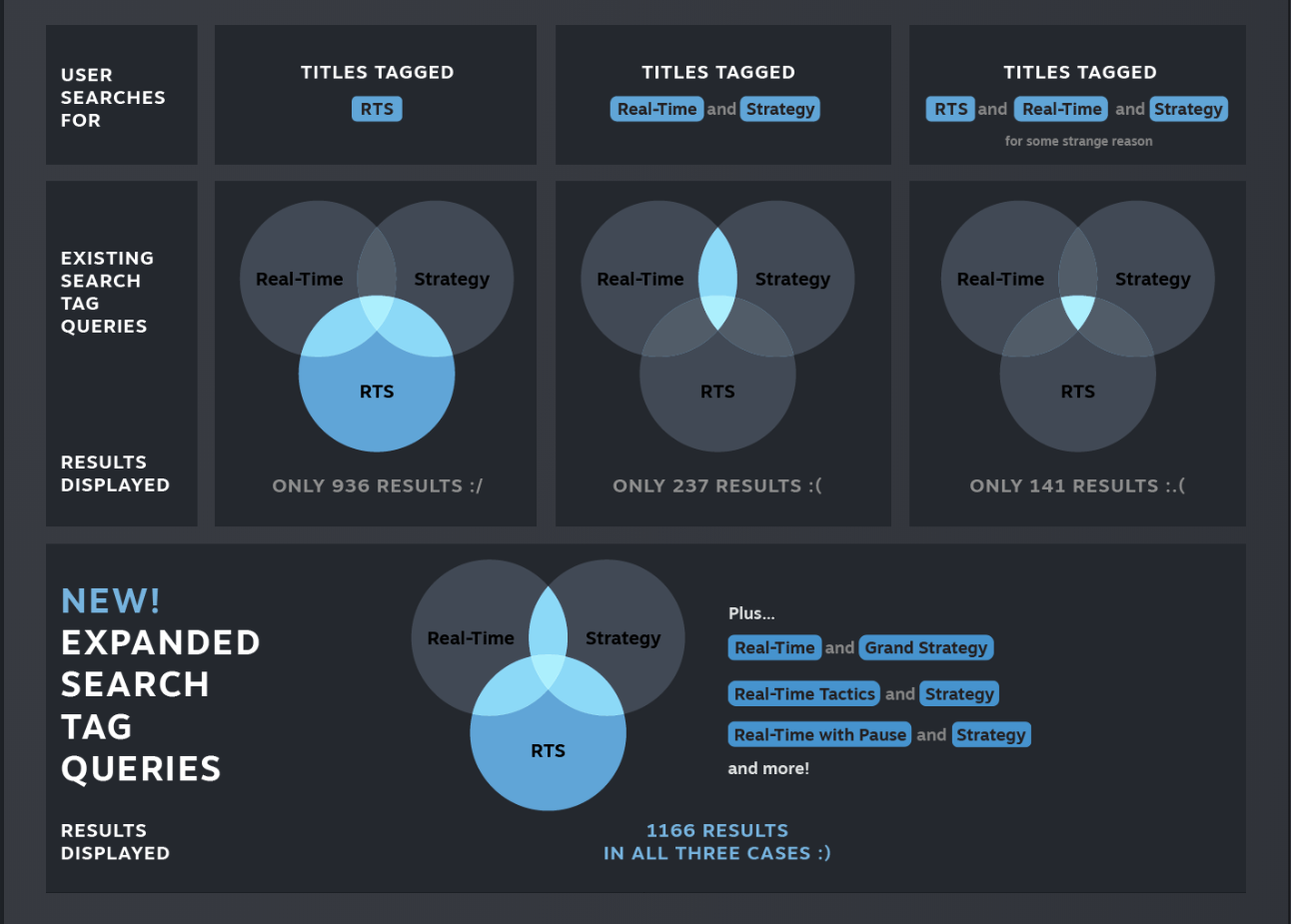 The battle against discoverability has been raging in the indie games space for a while now. The sharp rise in the number of games that have been released onto digital marketplaces in recent years has many developers scrambling to get eyes on their titles. In an attempt to help out smaller teams, Valve’s Steam marketplace has taken steps to improve the chances of indie success, the most recent of which is the introduction of new search engine functionality the company is calling Query Expansion.

In a post on the Steam forums, Valve detailed the changes it has made to the market’s search function in order to make it easier to find the games you’re after. The primary adjustments revolve around tags, the labels that the store uses to differentiate games into various genres and styles.

“The core of Query Expansion is that we don't just consider the tags on a game, but also the tags that these logically imply,” the post reads.

The idea is that Query Expansion seeks to apply human logic to game tags, meaning that it attempts to draw a connection between related search terms in order to return a more broad field of results. As an example, the post explains that games tagged “RTS” might not also carry the tags “real-time” and “strategy,” meaning that the “RTS” search results are different from those of “real-time” or “strategy.”

“Some games are tagged more thoroughly than others. We have some longer-term plans to help address that, and Query Expansion is a simple first step,” the post reads.

In order to subvert the issues related to search queries, many developers might load their game with an inordinate number of tags so that it shows up in more searches. This strategy can be detrimental, though, according to Valve’s post: too many redundant tags means it’s harder for users to get an idea of what a game offers.

“We instead need more meaningful tags which help describe or surface the game to users in the Steam store,” Valve notes.

The approach that Steam has taken is to dive into its database and create a logical link between categories that the typical user might see as correlative.

“We went through our entire list of tags and mapped out relationships that everyone could agree made sense,” the post explains. “This includes tags that break down into other tags (FPS → First Person + Shooter) as well as tags that are constructed from other tags (Strategy + RPG → Strategy RPG). Most of these relationships work in both directions, but not all of them.”

Query Expansion is just one part of Valve’s greater efforts to tackle the discoverability issue. For Mike Rose, founder of indie publisher No More Robots, the efforts are appreciated even if the results are uneven.

“In all honesty, I've been a pretty big fan of everything that Steam has been doing with their store over the last 12 months,” Rose told GameDaily in February. “The discoverability stuff has been a mixed bag, but the fact of the matter is that quite frankly, they don't technically need to have bothered doing any of it--they could have just done nothing. But instead they have been attempting to tackle the issues that devs are bringing to them, and a lot of what they have been doing seems to be having at least a little impact.”

Earlier this month, Valve claimed that more games are finding “success” on Steam--the term “success” referring to revenue totaling $10,000 within two weeks of launch, in this case. According to Nicholas Laborde, founder of indie dev Raconteur Games, this metric is short-sighted and misleading.

“It is irresponsible to suggest a financial goal post beyond becoming profitable as being ‘successful,’ especially in the indie space,” Laborde told GameDaily at the time. “If you are a solo dev who spent maybe $2,500--and lots of hours--over a year to make their project, and it earns $2,501? Hell, that's a success to me--you didn't lose money! That's as simple as the definition of ‘success’ should be when it comes to money.”

Mixed reactions to Steam’s efforts aside, there’s no denying that something needs to be done to help indies in the discoverability department. Rose is right; Valve is under no obligation to address the issue. But it is addressing it, or attempting to, at least. There’s an argument to be made that increased competition in the digital marketplace arena from the likes of the Epic Games Store has spurned the company to action, which, if true, benefits everyone--developers, publishers, storefront operators, and consumers. Discoverability may remain a moving target for the time being, but at least we’re seeing progress on that front.