Report: games market to generate $159 billion in 2020 thanks to coronavirus (Newzoo) 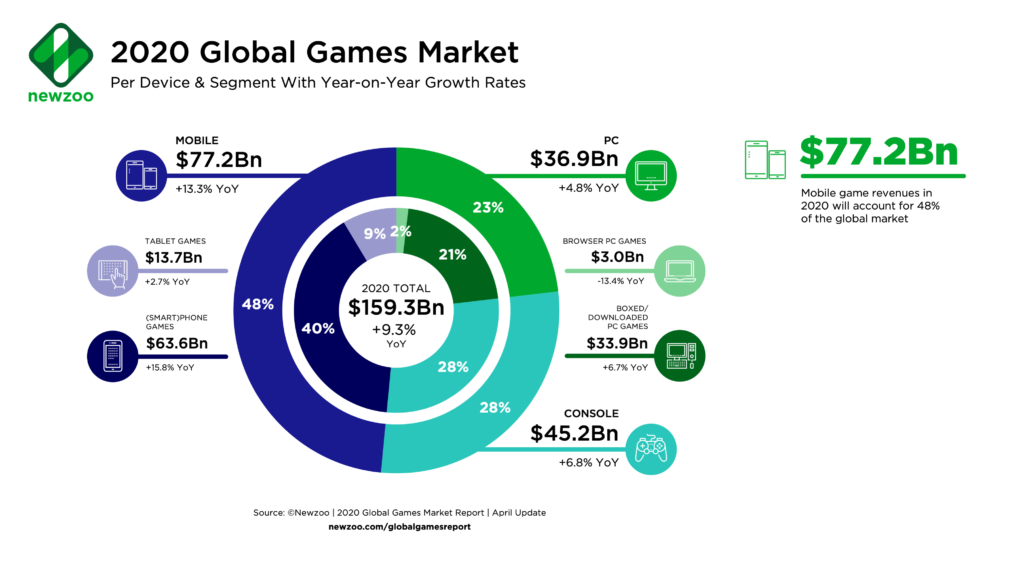 COVID-19’s impact on gaming has been well documented at this point. In the face of shelter-in-place and quarantine orders, many people have turned to video games as a primary form of entertainment, resulting in an impressive spike in revenue for the sector. Consequently, many experts have been forced to reexamine their projections; the pandemic caught analysts off guard, and most have been forced to adjust their predictions for 2020 and beyond.

“Overall, the 2020 forecast is up based on the higher engagement, driving higher revenues,” Tom Wijman, senior market analyst at Newzoo, told GameDaily. “There are some caveats to that, mostly related to delayed releases, specifically in anticipation of the next generation console release at the end of the year. In our latest forecast, we shifted this revenue uptake from 2020 to 2021.”

According to Newzoo’s new report, so far, the mobile sector has benefited the most thanks to smartphone and tablet device saturation; more than two-fifths of the world owns such a device, and most of the platform’s top-performing games are free to play. As a result, Newzoo predicts that mobile games will generate $77.2 billion this year, which is growth of more than 13% over 2019.

The report, which Wijman wrote, also predicts significant growth within the console and PC markets, even if it’s not as substantial as the mobile market. The sector will hit $45.2 billion, denoting a 6.8% year-over-year increase. Unlike the mobile sector, though, the console and PC market has the potential to see some negative side effects, namely on the development side of the business. The pandemic has already caused delays of some high-profile games, including The Last of Us Part II.

“If someone is eager to play a game, they more than likely can wait for another month,” Wijman explained. “Of course, if it turns into a six-month or one-year wait, the story changes. However, we haven't seen that happen. We might see a bit more grey market movement if games are available in other countries, but even that will be limited to the hardcore few who can't wait to play a certain game.”

While software is particularly susceptible to potential delays, things appear more stable on the hardware front. Sony and Microsoft have both expressed that they do not anticipate postponement to their respective consoles--most factories have been able to ramp back up to full production, or a reasonable facsimile, after being closed for most of February. The big remaining question is with pricing and console demand.

“Component scarcity and logistics issues will increase the production and shipping cost of next gen consoles set to launch this year,” Niko Partners analyst Daniel Ahmad told GameDaily last week. “At this point, it is unlikely that Sony and Microsoft will price consoles at $400 or lower without taking a significant loss. As noted in the report, software delays, an upcoming recession, higher prices of consoles, and cross-gen games in year one could provide less of an incentive for current gen owners to upgrade initially.”

With the market in uncharted territory at the moment, Wijman said that the lasting impact of COVID-19 on the games industry is difficult to predict. With no widely-accepted exit strategies taking shape just yet, it’s nearly impossible to surmise where global economies will stand a few months from now. Still, there are some safe predictions to be made as the pandemic winds down throughout the remainder of the year.

“First of all, the market will normalize following the record-breaking months for engagement and spending we're now in,” Wijman said. “It'll be a challenge for games companies to retain some of the newer players, but we do expect a part of the new players to continue playing. The pandemic has surely accelerated the shift towards digital sales on console.”

Wijman also acknowledged that the games industry is better-equipped than many others to weather a recession, but there are too many variables at the moment to make any concrete statements on the matter.

“We don't know how the majority of the world will exit this unprecedented situation and how economies will shape up in the coming months,” he said. “There are already reports about rising unemployment, and many sectors will be highly impacted much harder than the games market. The outcome that these developments have on spending power might impact the games market in ways that we can’t foresee yet.”

In all, Wijman expects the games market to fare better than other major industries in the wake of COVID-19, but it won’t escape unscathed. To be sure, the uncertainty faced by consumers in an economy ravaged by a pandemic is intimidating, which could lead to less demand for new video game consoles, especially if they’re priced too high. Right now, it appears that Microsoft and Sony are in the middle of a game of chicken to see who will announce a retail price first, which certainly doesn’t help consumer confidence.

“The games market is one of few industries lucky enough to benefit from the ongoing pandemic, but it won’t come out of this completely unscathed as there will be negative consequences later down the road,” Wijman said.