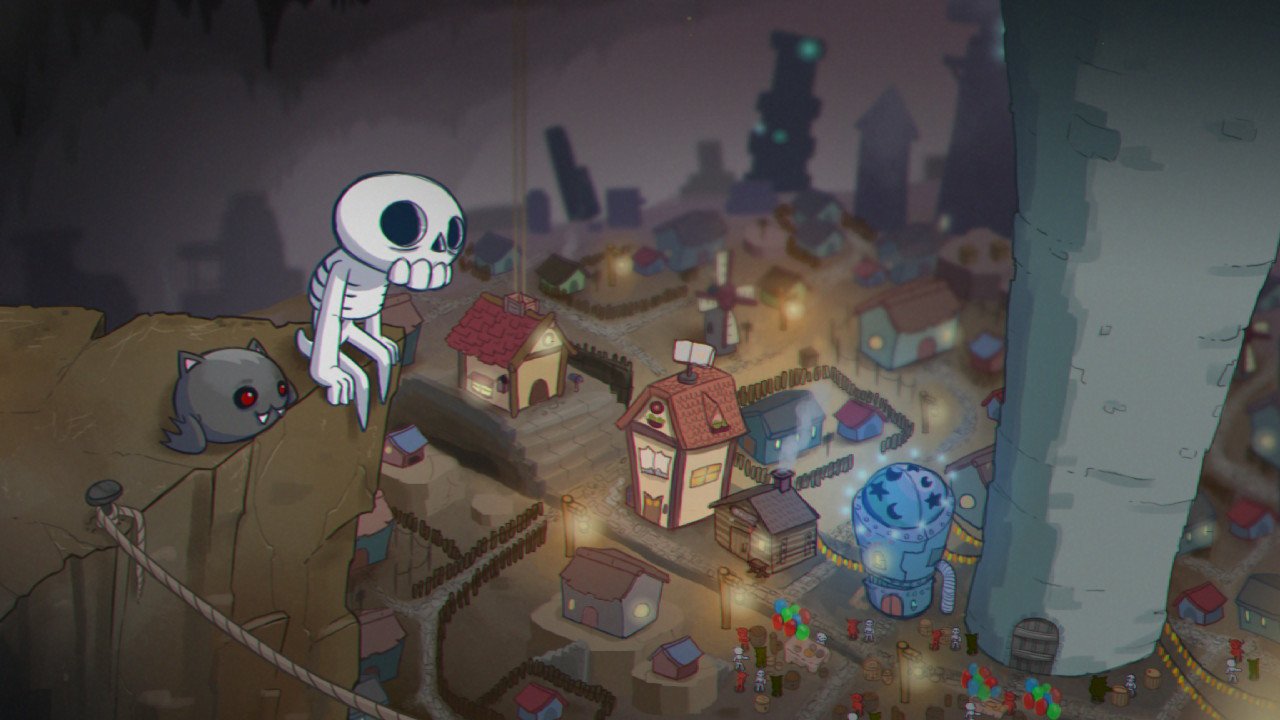 Today, Japanese publisher Konami Digital Entertainment announced that it is publishing Skelattack, a 2D platforming adventure from San Francisco-based developer Ukuza, a deal that represents a shift in Konami’s publishing strategy, which has typically avoided collaborations with indies.

“We initially met with Ukuza at GDC and recognized immediately the strong potential to collaborate on the early incarnations of Skelattack,” Mike Rajna, senior director of business development and licensing at Konami, told GameDaily. “Their passion for the game was clear from the outset. and we really liked the overall look and feel for the game, along with the fact that we view Ukuza as a strong development partner.”

While Rajna acknowledged that working with Ukuza is certainly a departure for Konami, it doesn’t specifically mean that we should expect a stronger focus on indies from the studio. Rather, he explained that the Skelattack deal is part of a larger effort to broaden Konami’s portfolio.

“The indie landscape is definitely a space we will continue examining as part of our overall global brand portfolio, but our interests aren’t just with indie developers and projects,” Rajna said. “We are seeking out the best possible content across the board.”

For an indie like Ukuza, however, a publishing deal with a big name like Konami is an incredible opportunity not afforded to many small developers. Shane deLumeau, CEO at Ukuza, certainly doesn’t take it for granted, and he expressed gratitude to the studio behind big franchises like Castlevalia, Contra, Silent Hill, and Metal Gear

“Over the course of our partnership, Konami has been nothing but supportive of the vision my team had for the game and building it as we saw fit,” deLumeau told GameDaily. “They were there providing guidance and feedback about how we could improve upon various levels, the gameplay, and overall strategy. The process was absolutely seamless and gave us the leverage we needed to make the game we wanted.”

DeLumeau said that Skelattack is inspired in part by some of the industry’s more prolific side scrollers like Hollow Knight and Konami’s own Castlevania. The world of Skelattack also takes cues from a number of quirky films such as The Nightmare Before Christmas, and Monty Python and the Holy Grail.

“The game started as a simple reverse dungeon crawler where you play as the skeleton NPC you are used to slashing down as the human adventurer,” deLumeau explained. “We flipped that script on its head and put you in the shoes of the skeleton and the other dungeon denizens just trying to protect their home from human invaders.”

Indie development has become increasingly challenging in recent years thanks to the sheer number of games being released on a yearly basis. The resultant discoverability struggle is perhaps the most imposing roadblock small teams face, especially as most indie budgets don’t allow for the hiring of marketing professionals. This makes Konami--a company with deep pockets--an invaluable resource to a developer like Ukuza.

“With thousands of games releasing every year due to the proliferation of accessible development tools, it’s easy for great games to be washed up in a wave of smaller, lower quality games. We were lucky to have Konai’s fantastic marketing team here to support us the entire way,” deLumeau said.

He explained that in most cases, indie development is largely a passion, which it should be. However, the industry can be unaccommodating for those unversed in some of the more business-focused elements. For example, it’s important to build a community around a game, and keep the business side of things in mind during the entire development process.

“If you do that, run it as a business, put agile development processes in place, and realize your vision, you’ll be able to bring a game title to market,” deLumeau said. “Since many indie developers do it as a hobby, sometimes it can be difficult to make the jump to more formalized processes.”

Of course, the COVID-19 pandemic exacerbated things greatly, making a challenging market even more unwelcoming. DeLumeau said that the team at Ukuza has mostly adjusted to remote work, though, and hopes that future studios see the value in being able to work productively from home.

“We are continuing to explore partnerships with teams that have passion for their work and want to create new and unique experiences for gamers,” he said. “The bottom line is, we are continually seeking ways to diversify and build our portfolio of high-quality games with unique and engaging IP.”

At the end of the day, deLumeau recognizes that his team has been exceptionally lucky. Konami has provided Ukuza with a level of financial stability that the majority of indies could only dream of. What Konami gets out of the deal is a clever indie platformer built by a team of passionate creators. It remains to be seen if this deal represents a shift in Konami’s publishing business, but for now, PS4, Xbox One, Nintendo Switch, and PC players can enjoy the fruits of Ukuza’s labor.