PUBG Mobile hits 100M downloads, could be 'poised for sharp increase in revenue' 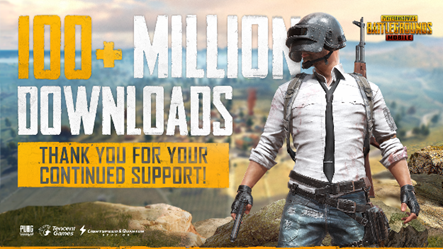 PUBG Mobile continues to march along at a nice clip despite all the attention given to rival battle royale game Fortnite these days. Tencent and PUBG Corporation announced this week that the title has eclipsed 100 million downloads within 4 months (not including China, Japan and Korea). Moreover, PUBG Mobile also recently exceeded 14 million daily active users (DAU).

Analytics firm Sensor Tower has noted that the game's first season is about to come to a close, and with the second one about to begin the firm does expect another jump in revenue for PUBG Mobile, which has already generated $50 million across the App Store and Google Play.

"Our data shows that the game’s Elite Royale Pass, which players purchase for the equivalent of $10 worth of in-game currency, has made a profound impact on PUBG Mobile revenue since its introduction on June 19," wrote Sensor Tower's Head of Mobile Insights, Randy Nelson.

"Prior to its incorporation, the game had averaged approximately $170,000 per day in player spending. Since then, it has grossed an average of $689,000 per day, or about four times the pre-Royale Pass amount. Last month, PUBG Mobile was the No. 33 ranked mobile game by global player spending, up from No. 68 in June."

Similar to spending patterns in Fortnite, the Royale Pass model seems to drive further purchases as new seasons kick off. Fortnite in-game purchases have already surpassed a staggering $1 billion and the mobile version has been generating more than $2 million each day. In general, Fortnite has been outstripping PUBG in terms of revenue and streaming popularity.

While PUBG is not likely to overtake Fortnite anytime soon, the game is expected to get further marketing boosts. Tencent Games recently partnered with Paramount Pictures to incorporate new in-game content based on the movie franchise Mission: Impossible Fallout. There will be theme music, new outfits, new challenges and more.