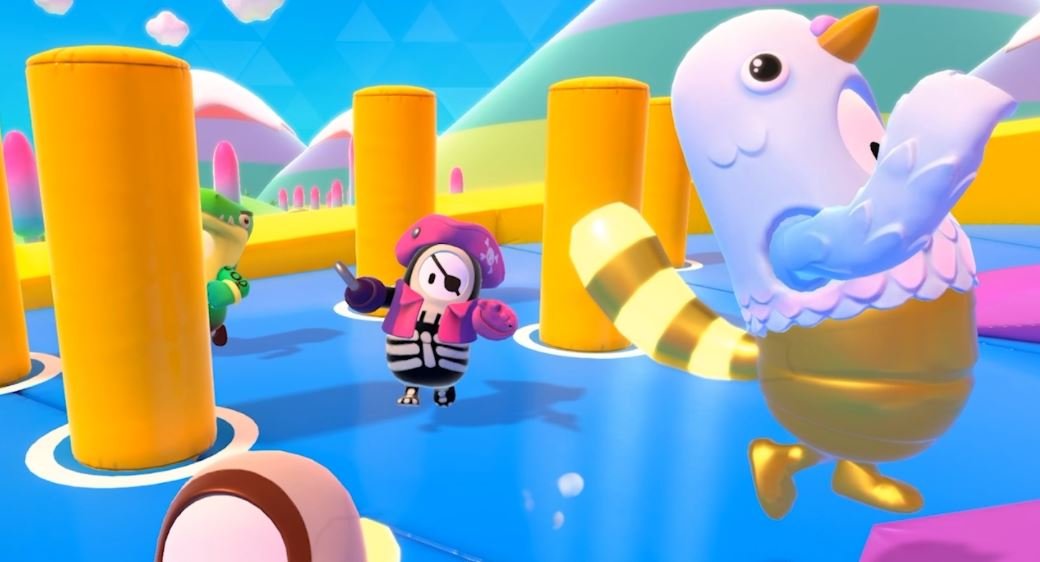 Yesterday, developer Mediatonic and publisher Devolver Digital launched party battle royale game Fall Guys: Ultimate Knockout to a cacophonous reception. According to TwitchTracker, the game peaked at more than 520,000 viewers on Tuesday, making it briefly more popular than heavy hitters like League of Legends, Fortnite, and the platform’s Just Chatting channel. Additionally, as of this writing, the game is the top-seller on Steam.

“Just spoke to my friends in the server team and we have at least 120k people connected to the game right now,” the official Fall Guys Twitter account posted.

For Dave Bailey, co-founder of Mediatonic, the impressive reception is the culmination of years of hard work.

"Everyone at Mediatonic has been working for years to get to this moment," Bailey told GameDaily. "Fall Guys is a dream come true for us, and the support from players, streamers, and the whole games industry has been overwhelming, it's just incredible."

At least part of the success can be attributed to a giveaway on the PlayStation 4; the game was one of August’s free PS+ titles, a move that SuperData principal analyst Carter Rogers called very smart.

“The PS+ giveaway was clearly the right move given the breakthrough success so far with over 500K viewers on Twitch and 1.5 million players,” Rogers told GameDaily “Battle royale games--which this effectively is--need a large player base to quickly fill matches, and this provided a way to do so without going truly free-to-play out of the gate.”

Of course, giving away the game means that Fall Guys is missing one potential revenue stream, but Rogers posits that the strong Steam sales will help offset these losses. Instead, it’s more important to capture an initial audience to pave the way for long-term player engagement. Also, there are still ways for PS4 players to contribute sales numbers.

“Much like with Rocket League, the paid PC version should also act as an important revenue source during the free PS+ window,” Rogers explained. “But unlike Rocket League, Fall Guys has paid additional content at launch, so PS4 players can contribute directly to earnings during this period of heavy engagement.”

A strong streaming presence and high initial engagement are all well and good, but for Fall Guys to stay relevant beyond the launch window, Mediatonic is going to need to pull out all the stops.

“The game’s long-term success is going to depend on how quickly the developers are able to add new minigames and content,” Rogers said. “The game probably does not have as high a skill ceiling as something like Rocket League. That skill ceiling ensured the longevity of Rocket League by enabling high-level play and an esports scene. For Fall Guys, new content is going to be what keeps players coming back.”

The launch of Fall Guys caps off a very busy several months for Mediatonic. In June, the company announced the formation of the Tonic Games Group, an umbrella brand that oversees Mediatonic, Fortitude Games, and The Irregular Corporation. For Mediatonic co-founder Dave Bailey, the business shift was necessary as the developer’s priorities have evolved in recent years.

“We started to focus on deals that were less about a work-for-hire way of thinking, and more about how we make games that stand the test of time, and add value to our own business over the long term,” Bailey told GameDaily at the time.

By and large, Mediatonic and Bailey’s philosophy is one of optimism and positivity. For instance, Tonic Games Group boasts a strong focus on its workers’ mental health, with several programs aimed at helping employees cope with today’s pandemic-stricken environment. It’s not difficult to draw a parallel between this attitude and Fall Guys’ lightheartedness. If anything, the game’s impressive launch highlights a larger demand for levity. Hopefully Mediatonic can deliver the goods for a long time to come.