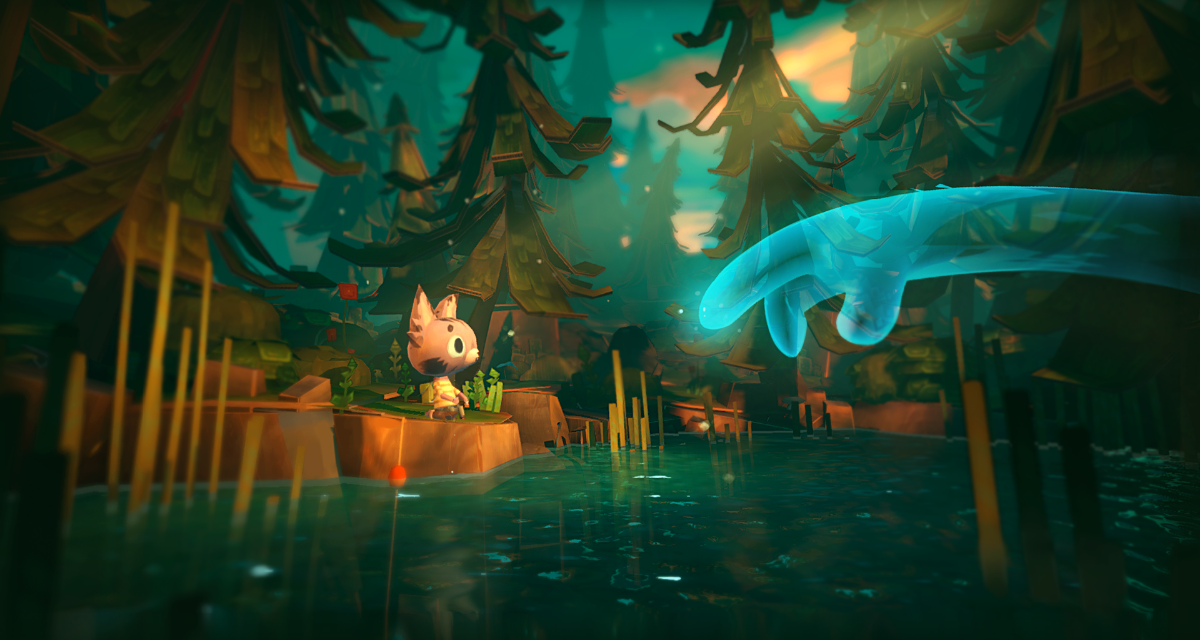 Swedish studio Zoink Games is coming into its own. With well-received games like Fe and Flipping Death, and the creation of the Thunderful Group which now serves as the parent company to both Zoink and Steamworld Dig studio Image & Form Games, the developer is poised for growth. Zoink CEO Klaus Lyngeled’s next step is into the world of virtual reality. He’s partnered with Sony on PSVR-exclusive Ghost Giant, which doesn’t have a firm release date but is likely shipping early next year.

VR has not been that profitable for many developers yet, but some indie studios are banking on the creative rewards inherent in embracing the technology. Zoink’s VR project was the result of nostalgia and a fascination for what VR could be through that particular lens.

“I've been working with games for 20 years now. It's always really cool when there is a new medium,” Lyngeled explained to me after I played Ghost Giant at E3. “You feel like, 'Wow this is actually different.' I went through the whole '90s era of VR, which was horrible. You thought it would kind of be cool watching Lawnmower Man and all that stuff, you know?

“The first time I tried Oculus... I thought it was really cool how there's such close parallax. So I thought, if I was going to do a VR game, I really wanted to do something that's quite close to you like a little puppet set, very cozy. [And] at the same time, we were really good at doing those games like Stick it to the Man, Flipping Death, both adventure games.”

Ghost Giant is a narrative-driven puzzle game built for VR. You control the world and environments with bit ghost hands and are completely invisible to everyone except for a lonely little boy named Louis, whom you are tasked with protecting. For Lyngeled, it’s an homage to the old point-and-click adventure titles, but adapted for VR.

“I liked the way a lot of games like Old Monkey Island games, when you play the character, he's always talking in a way, to you, to the screen,” Lyngeled noted. “He's saying what he's thinking, what he's doing. So it feels like you and [he] are kind of becoming a team together. You're not really in the game. You're not there as a character. So the idea was that the main character Louis actually does see the player. You are actually a player inside the game. So you become his ghost giant who's there. It’s sort of creating that buddy movie feeling to it. You become a team to work together to solve puzzles.”

“There's no inventory or anything annoying like that, but it is a puzzle game,” he continued. “It is about going around listening to it, getting into a story, understanding what the characters want, what they're interested in, what they're not interested in. But it's a lot more physical here because it's always fun in VR to rotate the thing in your hand and throw it ... pull stuff ... so the whole world is really built like a puppet set but it's also built into almost like a mechanical machine that you can pull ladders and move things around. It's almost like somebody built this world but the characters who live in it don't even see it themselves.”

Like Zoink’s other titles, Ghost Giant has a distinctive, charming art style. It reminded me a little of Funomena’s puzzle VR title Luna. Lyngeled said many people have mentioned it in the same breath as Polyarc’s adorable platformer, Moss. He’s been inspired throughout his career by Double Fine, Tim Burton, and movies like Coraline.

“The whole idea of actually standing inside a stop-motion set was something that inspired us,” he said. “I thought the feeling of moving around in miniature in something man had built [would be unique for a game]. Everything is so badly built together [but] in a way it's also pretty. We wanted to look playful and look like it's built by somebody.”

The Coraline inspiration makes sense when you consider Lyngeled’s creative thinking, which leans a bit more towards the macabre -- not in a scare-your-pants off way but more akin to the weirdness of an Edward Scissorhands.

You have to edit the world inside VR or it doesn't become good. Medium provided that tool to get a sketch of that first.

“I think there's a bit more room for cuter horror games,” Lyngeled explained. “It doesn't have to be totally scary horror but horror where you go in and it's more mystical with lush environments. Almost like an Oddworld kind of game. It would be nice to be in a darker world but still a bit spooky ... that would be interesting to do. I'm just throwing ideas out here [though].”

For developers, it can be a steep learning curve to get started in VR game creation. It’s a new, challenging paradigm that requires patience and tenacity. Lyngeled remarked that the toughest part of developing Ghost Giant was just getting started with modeling the environments. Ironically, while the games is exclusive to PSVR, Zoink decided to tinker with an Oculus modeling tool called Medium before pushing further into development on Sony’s platform.

“I thought it was really cool to actually sketch up the level... we painted up the world and sketches, kind of like ZBrush. In VR, to really get an idea, when you look at something on a screen and you model it there you really don't get the same feeling so you have to have the VR glasses on as you're modeling the world,” he explained.

“You have to [do it this way] because PSVR doesn't connect to PC when you're developing. You have to use some other headset to actually really develop it. We basically built up the city in this sketch modeling tool. We even exported that level, put it in here and then built a low-res different kind of world with all the textures on top of that model. You have to edit the world inside VR or it doesn't become good. Medium provided that tool to get a sketch of that first.”

Medium is an interesting tool, but it’s not meant for full-scale development. Once he modeled the world, Lyngeled then used Unity to completely build-out Ghost Giant. But given the early origins of the game on Oculus, I had to ask if Ghost Giant would make its way to other headsets, just as Moss has recently. Lyngeled did admit that it’s a timed exclusive, but wouldn’t confirm other platforms just yet.

Releasing the game on multiple VR platforms makes good sense, especially considering how the broader VR installed base is still fairly limited. That said, Lyngeled is confident in the reception Ghost Giant has been getting since E3, and he thinks it will do well on PSVR.

Like Dream Reality Interactive’s Dave Ranyard, Lyngeled is optimistic about the highly engaged audience of the PSVR platform, even if there are only three million headsets out there currently.

“You don't need to always go for the [platform with the most people],” he said. “Just thinking back, look at the old Wii days, when the Wii came out. [People though], ‘Yeah, let's make a Wii game. I'm sure it's going to sell millions because there are so many Wiis out there.’ [But] nobody sold anything on the Wii because it wasn't about actually selling those types of games on it. It was just about selling Wii Sports and that's it. [PSVR] could be different; there's actually a player group here who's interested and want to pick up games, and there's not that many coming out.”

Assuming Ghost Giant does reasonably well on the market, Lyngeled said he’s definitely interested in pursuing further VR projects, especially now that Zoink has the backing of Thunderful Games to better position its titles on the international market.

“Zoink is growing and together with Thunderful and the Image & Form merger, I could see that we will actually continue doing VR games and having that as a separate unit,” he said. “The feedback from here has really shown me that there's a lot of interest. That's really important and spurs me on to making more. We're going to have to see how numbers are doing. [But] there’s a lot of interest from PlayStation to make more games in VR so that's always very cool. And we learned so much from this project also, so maybe we should continue doing it.”

I discuss game design now with the Game Director from SteamWorld Dig. So he's helping me out on a new design that we are looking at... I hope I can do the same for them, of course

Zoink has about 25 team members now, and 18 months ago, that figure was only 15. Factoring in the Image & Form team under Thunderful and the group has around 50 members. Right now, the teams are staying separate but they are already consulting with each other more regularly on projects.

“I discuss game design now with the Game Director from SteamWorld Dig,” Lyngeled stated. “So he's helping me out on a new design that we are looking at. He's giving me feedback. He's giving me pointers ... I hope I can do the same for them, of course.

“So we are sort of helping each other out, guiding each other but not exactly directly working on each other's projects. We probably will do that in the future, I think.”

“If there are indie games that we really like and we really believe in, then we want to help them and actually publish their games,” Lyngeled said.

“Maybe far into the future if everything goes really well you might see Zoink and Image & Form totally disappearing and just becoming Thunderful and that's it.”