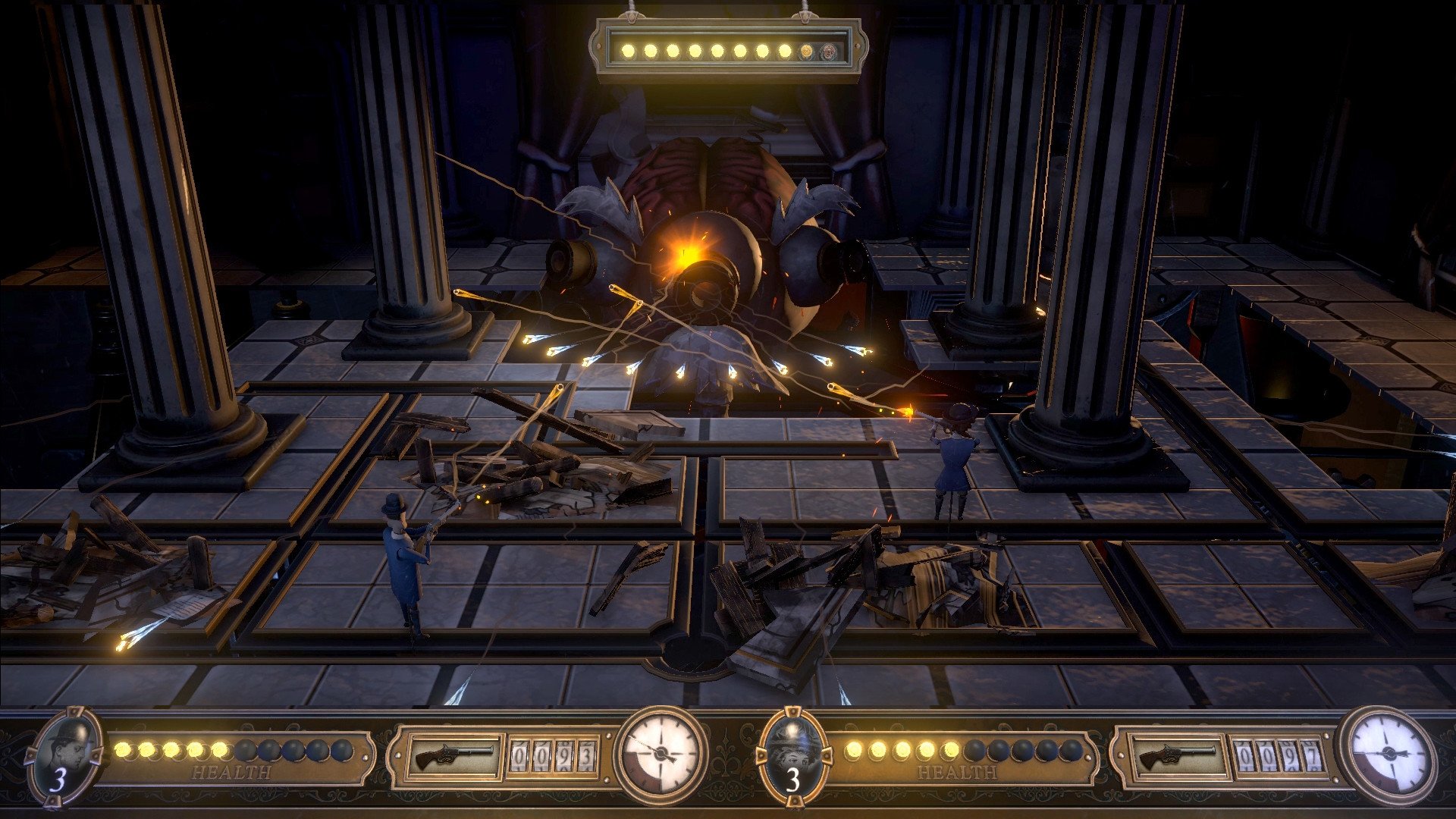 At the end of last month, Bartlow’s Dread Machine was launched on PC and Xbox One. It’s an arcade-style shooter that was jointly developed by Tribetoy and Beep Games, with the latter also serving as publisher. The defining feature of the game is easily its aesthetic: the whole thing takes place inside an old-timey mechanical arcade cabinet awash in visible gears and dials.

According to designer Clayton Kauzlaric, the idea began as an innocuous musing, a “what if” hypothetical proposed over lunch.

“I was asked what it would be like if someone had tried to build a modern video game but within the technical limits of a hundred years ago,” Kauzlaric told GameDaily. “We riffed on the idea for a while and joked about the machine being a hazard to public health if it used real bullets and explosives.”

At the time, the concept didn’t get much further than that, but it was an idea that remained in Kauzlaric’s mind until it grew into the founding concept of what would become Bartlow’s Dread Machine.

“A few weeks later I made a mockup in Photoshop that used vintage graphics, a framing cabinet with analog gauges and dials, and a character standing on a branching track. That really became the foundation for the game we developed in 2020.”

Kauzlaric is a self-described “huge history nerd,” and he collects a lot of print material and other ephemera from the early-1900s, which is the time period Bartlow’s Dread Machine is loosely based on. He used pieces from his collection, along with vintage clip art, to patch together mockups when Beep started conceptualizing the game in earnest.

“It had the right tone but we didn’t really know where the line was between what would be 2.5D images and fully articulated models,” Kauzlaric said. “There was some great back and forth with [Tribetoy founder Matt Hoesterey] and his artists Leif Drace and Bryan Gillotte before we dialed that in. Ultimately, we went with a fully three-dimensional world with some vintage graphics for the backdrops. Matt’s team really ran with the whole idea and ended up making it better than what I imagined.”

In addition to being the founder of Beep Games, Kauzlaric is a creative director at Xbox Game Studios, which is how he got hooked up with Hoesterey; the two worked together on a handful of projects at Xbox, and remained in touch when Hoesterey left to found his studio.

“After they shipped the impressive VR game Bow To Blood, we started talking about collaborating on something,” Kauzlaric explained. “He liked the initial design I had for Bartlow’s Dread Machine and we took it from there.”

The collaboration between Beep and Tribetoy saw the latter take over most of the day-to-day coding work, while Beep assumed a more hands-off creative role.

“Clayton had shared the original concept for Bartlow’s Dread Machine with me, and Tribetoy ran with it,” Hoesterey told GameDaily. “We looked at a ton of old tin toy references, magazines from years yonder, and actual tin arcades. Our lead artist Leif Drace used these inspirations to come up with our final aesthetic, while our UI lead Bryan Gillotte put his mind to making everything ‘work’ mechanically.”

Of course, committing to a tin toy/arcade cabinet aesthetic comes with a fair share of challenges, and Hoesterey said that the art style informed every other major aspect of the game’s design. Things that are typically taken for granted--such as how to display various UI elements--involved discussions on how they might logically be implemented in such a setting. This includes player movement, which is limited to pre-set tracks that the controlled character slides up and down.

“In the end, one of the biggest wins the aesthetic led us to was to create strategic situations and decision-making via the tracks, which are not normally found in shooters,” Hoesterey explained. “You have to think about how your movement will be limited if you move to a particular track, and how that will affect your ability to avoid fire. You can also manipulate enemies in a tower defense kind of way, forcing melee enemies to take long paths to reach you. Add in a bit of cover and there is a lot to think about and keep you engaged.”

As Hoesterey describes it, the result is Pac-Man-meets-arcade shooter, a combination that the team hopes is accessible to a wide audience. If nothing else, he hopes that people recognize the uniqueness of the aesthetic and the creative decision-making that went into building it.

“Something that really stands out as adding to the general fun of shooting stuff is how every aspect of the game would work like a ‘real’ mechanical arcade,” he espoused. “We never cut the camera after the game loads up. Even moving to a new level is part of the experience, the level deconstructing and reconstructing in front of your eyes.”

In the end, this is what Hoesterey and Kauzlaric hope players recognize in Bartlow’s Dread Machine, that it’s a labor of love and passion. It’s a game filled with little details and unique takes on traditional design. There’s a warmth there that often gets lost in AAA development, and their collective enthusiasm is apparent.

“We didn’t set out to get rich (although not going broke would be nice), and I hope the love we put into the game comes across in the details and uniqueness,” Hoesterey said. “We are really hoping people enjoy playing the game as much as we enjoyed creating it.”