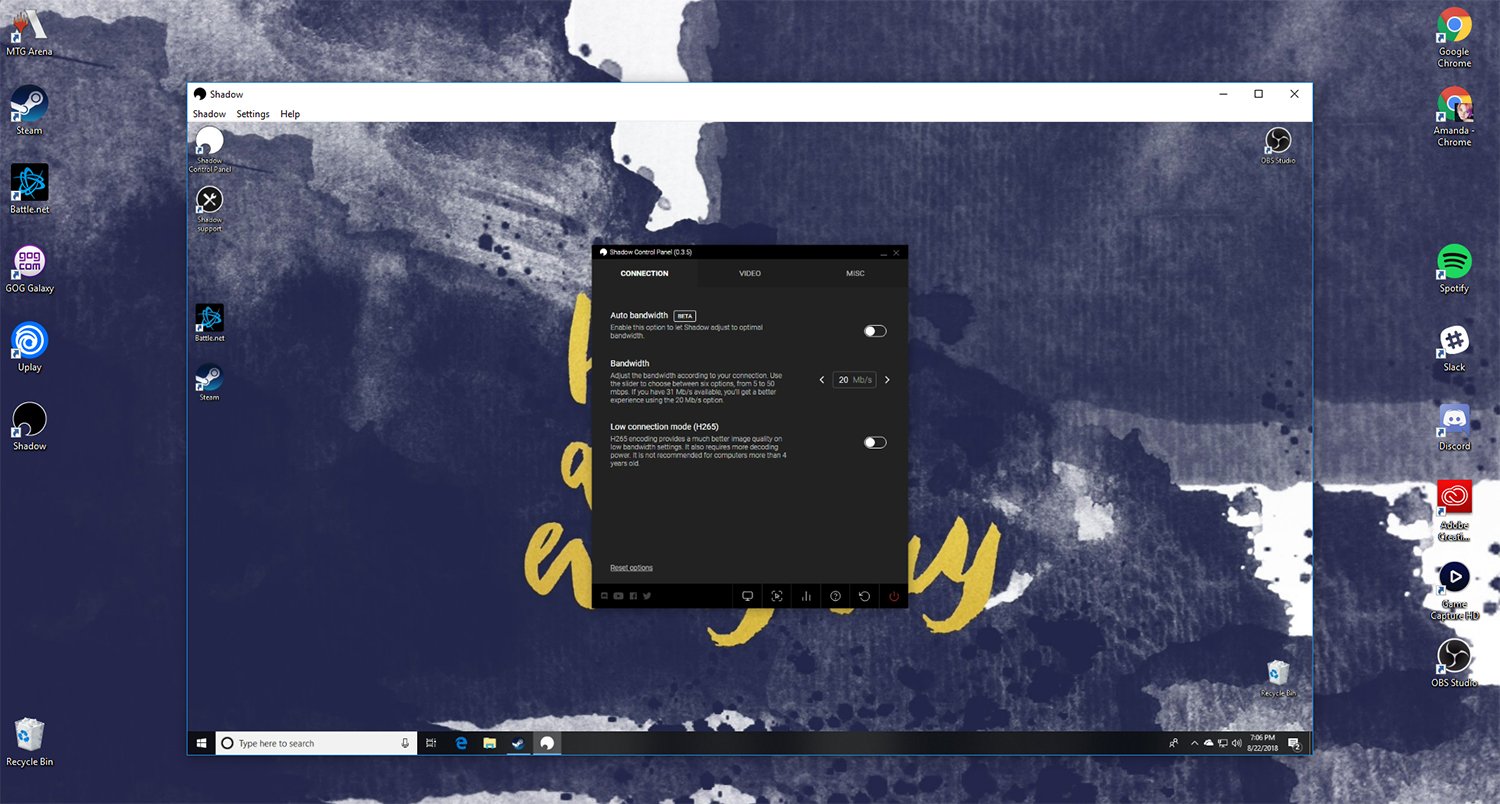 Cloud gaming was all anyone could talk about at this year’s E3 and in the weeks following. There was a lot of talk about “the future” and “what could be,” but no one was offering anything in the way of solutions. What I didn’t know was that Blade, a tech-startup from France that originally worked in mobile phones, was cooking up a cloud gaming service that is years ahead of what anyone else has brought to market to date.

It’s not flawless, as there are still concerns with data latency and lag, but it’s as close as cloud gaming has come to a viable end-user product that solves a real problem for gamers: how do you play video games at high frame-rates with ray-tracing, high definition shadows, and smooth anti-aliasing without dropping $2,000 every four years on new tech?

You subscribe to Shadow and get yourself a relatively decent laptop, instead.

GameDaily met with Blade Group’s Asher Kagan and Patrick Varloot, CEO and “everything else” (as Varloot insisted in both our conversation and in email signature) respectively. In addition to checking out a brief demo of the technology, it should be noted that GameDaily received a free Shadow account to test the technology outside of the contained environment that we originally experienced.

Shadow’s technology, which is fully proprietary and relies on data centers that are installed on both the east and west coasts in the US in addition to France, allows users to install the Shadow application on any device (minus iOS, but Varloot assured me it was incoming) and take their games with them wherever they went on whichever device they wanted to use.

Kagan’s hope is to change the way people play PC games, from a model that is hardware-centric to something that is more akin to how console gaming has evolved since the mid-2000s.

“What we felt is that gaming is super cool now but you have lots of friction to actually access the games, the content,” Kagan began. “The content is the key in gaming. You're buying a game for $60. You can spend hundreds of hours on this game. And so it's very cheap entertainment. But to be able to access this game you need to put together $1,000, $2,000 to buy the machine, to access the content. The content is the king, but you're still limited.”

These limitations were exacerbated by the cryptomining spree that had gutted the GPU market over the last few years. Nvidia saw its product sales slashed over the last quarter, and it wasn’t because their product was faulty or that people aren’t buying PCs — it’s that the cryptocurrency boom is finally over and GPU pricing is beginning to stabilize as a result.

But with Shadow, consumers have the choice to offload those hardware concerns. It’s something that Blade looks after for the users — continual upgrades to ensure optimal gaming with some of the best tech available. Each Shadow user receives their own virtual machine, which isn’t an emulator or a library of games. Instead, Shadow enables users to have access to their own Windows 10 PC. Outside of hard drive space, there’s no limit to the game services that a user may install on their Shadow virtual machine.

The service originally soft-launched in Paris in January 2017, two years after Blade spun up as a company, to around 5,000 users.

“We got amazing feedback,” Kagan remarked, grinning. “We did [a] very big fundraiser based on [what we needed] to go to the market. We raised... around $77 million. And we launched the product in France in November 2017. Since then it's [been] amazing. We're selling [a] crazy amount of subscription[s]. We’ve sold 25,000 subscriptions so far. We're actually [selling to] 20% of all the new gamers within France.”

Shadow expanded into the US market late last year and launched a proof of concept in California in late February.

Kagan traveled to the United States, found a data center, offices, and a house before moving his family in October of last year. A suitcase and an empty office have evolved into Blade's Palo Alto base of operations.

“You have autonomous cars everywhere,” Kagan said. “You have robots doing food delivery. But you're going to the website to find more details and you have [a] loading page. The internet is very, very slow.”

Slow internet is the kiss of death for cloud anything, which continues to be a hair-pulling grind for the developers and IT infrastructure technicians at Shadow. But Kagan and his co-founder, Emmanuel Freund, had a solution: corral 10 of the best developers they could find into a beautiful villa in France, set them loose in the code repository, and let them solve as many problems as they could, as quickly as they could. (It was all very HBO’s Silicon Valley, but without the awkwardness.)

“They developed some amazing things,” Kagan said. “Like, they developed an AI for the clients that can measure all the gaps between the packets. They're checking if it's changing the gap, if it's out of folder and actually based on that we can focus very well how the internet would be in a 10 second, 20 second. It's very, very relevant.”

The AI packet gap detection doesn’t mean that Shadow doesn’t have a bare minimum for bitrate, though. They’re asking for at least 15 megabits per second. Unlike YouTube or Netflix, Shadow doesn’t offer low quality video to help the user wait for better buffering speed so they can kick back up to high definition. And, as I discovered while playing Destiny 2 on my Macbook Air using Shadow, that latency is a real beast when you’re playing a first-person shooter, even if you’re operating at a fairly high bitrate overall.

But the latency (and performance) issues that I experienced while playing on my Macbook Air (and on my $2,000 gaming PC, for that matter) weren’t a result of sharing resources with other Shadow users, as each virtual machine is dedicated to a single user.

Kagan wants Shadow to be as device agnostic as it can be, provided that Shadow apps are available for each platform (including smart TVs and Linux builds).

“So we developed this for Windows, for Linux, for Android, for iOS, for smart TVs. In the office, we have a 4K TV that you can play 4K games [on] without any console, without anything connected to the TV. And the cool things about that, you can start to play in your room. You can launch the game here on the tablet and [take it with you.]”

The handover between devices is fairly seamless, too, as long as you’re not playing an online game like Destiny 2. Kagan and Varloot gave me Ghost Recon: Wildlands to play with on a Macbook Pro, Windows Surface Pro, an Android phone, and a Samsung tablet. All of the devices handed off the gameplay with relative ease, without there being much in the way of latency issues. (Which made me a little suspicious.)

Once Shadow launched on the east coast ($34.95 a month, with a new service incoming that will provide a terabyte of storage, price to come), I got into the nuts and bolts to see how the service would work on the majority of my devices. Unfortunately, I didn’t have an Android phone or tablet kicking around (and the iOS app isn’t available yet), so I was confined to Windows and Mac.

I’d recently purchased an HP Omen desktop (marking the first time I purchased a desktop, rather than building one), which I used as the benchmark for how well the Shadow service would perform. As expected, the Omen hummed along at 60 frames-per-second at “High” or “Highest” on each of the graphical settings in Destiny 2, which was my benchmark game.

As you can see from the video, Shadow streamed Destiny 2 to my PC fairly well. There were lag issues from time to time (anathema for first-person shooters), but likely because of other online traffic in my house (and in my office) at the time, including watching an industry event via Twitch. The Macbook Air didn’t have the same lag concerns, but certainly suffered from video degradation as a result of the (older) hardware inside. I wasn’t able to capture gameplay from my 2016 Asus Zenbook, which is about the same age as my Macbook Air, but it performed much better than the Macbook Air did.

Destiny 2 bumps up against the limits of my powerful gaming rig, which is why I chose it as the game to play on both systems. It was beautiful on the Shadow (everywhere but my Macbook Air), but the lag made it challenging for me to navigate through early-game content without running into a wall or a pack of Fallen. On less intensive games, like Cultist Simulator, I didn’t have the same issues and the handoff was cleaner, too.

While I won’t be able to unplug entirely from my gaming PC, it’s heartening to know that when I’m ready to buy a new laptop, I don’t have to get a big, bulky gaming machine. Instead, I can invest in a mid-range system that will allow me to bring my favorite PC games with me without the high-end components required to run them.

And then there’s the Shadow Ghost (successor to the now deprecated Shadow Box), freshly announced at this year’s Gamescom in Cologne, Germany. The Shadow Ghost is a complementary system that cuts out the need for a standalone PC or laptop at all. Instead, it plugs directly into a monitor, providing ports for peripherals, bluetooth and dual-band wireless, and the ability to stream 4K through the Shadow service. Its predecessor was available to rent where Shadow was available in Europe, but Shadow Ghost will be a one-time purchase that works in conjunction with the Shadow monthly subscription. Blade Group is aiming for a Q4 2018 rollout in Europe with availability in the US shortly thereafter.

Shadow isn’t flawless. As is, it can’t replace the gaming rig I just purchased. But Shadow’s contribution to cloud gaming is undeniable — it has set the stage for what the future is going to be. And as Shadow’s technical team continues to whittle away the latency and performance issues on both server-side and client-side (as there are a number of client-side options that are currently in beta), the service itself will continue to improve by leaps and bounds.

Kagan and the Blade Group are committed to changing the way gamers interact with PC gaming, all but removing the high barrier to entry by providing a service that is relatively inexpensive and easy to use. They’ve got a long way to go to achieve saturation in the US market, let alone the North American market, in addition to the rest of Europe. Each country’s technical infrastructure is vastly different from one another, so Shadow has to continue to move slowly and methodically. But by offering the highest quality cloud gaming service on the market, Shadow has set itself years ahead of the rest of the competition, securing a bright future for the cloud.