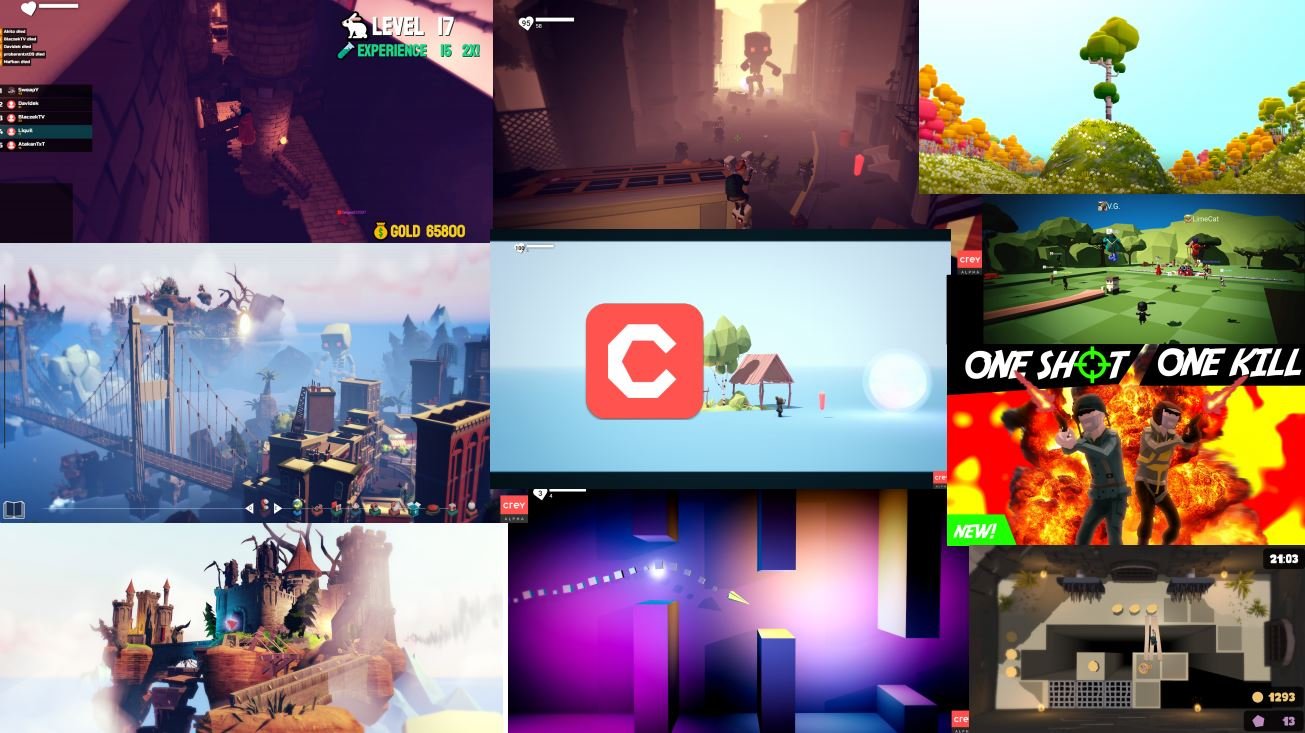 The success or failure of a game creation platform hinges on the enthusiasm of its community. The most notable examples of player-driven sandbox experiences--think Roblox, Minecraft, and Fortnite--have developed a sizable audience of creators that use the tools provided by a developer to build impressive experiences that, in many cases, are worthy of their own games.

Through a combination of player creativity and community dissemination, these platforms have become immensely popular. They function similarly to a social media platform in this way; a user creates something, distributes it to a community, and the most popular creations enjoy notoriety. This is a comparison that isn’t lost on Crey Games, an up-and-coming platform that looks to blur the lines between game creation and social media.

“We are aiming to deliver the first true social gaming network,” Fabien Rossini, CEO of Crey Games, told GameDaily. “It’s a creation platform but we’re also building towards it being an online social hangout for friends, creators and players.”

Rossini explained that Crey Games seeks to leverage the popularity of gaming, which is the most popular--and lucrative--form of entertainment in the world. As such, many people have tied their identities to gaming, who use it as a sort of self-expression in the way musicians and artists do.

“People define themselves by the gaming community they belong to the same way previous generations defined themselves by the music they listen to or the films they love,” Rossini said. “As players become closer and more invested in the future of games, it’s only natural that they become increasingly knowledgeable in games and game design, with a hunger to create something of their own--that is the platform we want to deliver with Crey, built with social at its heart.”

The way it works is that Crey provides users with a suite of simple-to-learn, codeless tools that allow them to build games. This isn’t unlike existing platforms like Dreams or Core, but where Crey differentiates itself is in the way social is built in. Users have their own social hubs that they can customize. Here, they can hang out with other users, access games that others have built, and much more.

One of the goals for Crey is to foster a completely user-generated economy. Users can use Crey’s creation tools to build assets, which can then be sold on the platform’s marketplace for real money. In this way, there exists the potential for top-tier creators to earn a viable living through Crey.

“Monetization options will be via subscription to exclusive content or early access, and we will also enable in-app purchasing for vanity items like avatars, virtual goods and props,” Rossini explained. “We are also enabling a Crey studio function where you could set up with a friend or colleague to create content for the platform. These are features we’re bringing to Crey in 2021, which we feel makes our platform different to others out there.”

To make Crey a truly socially-driven platform, Rossini and his team are targeting a very specific demographic: Gen Z. Through platforms like Instagram and TikTok, Zoomers have demonstrated an affinity with social media not present in previous generations, which makes them an ideal group for Crey’s ambitions.

“Gen Z is the first true digitally native generation,” Rossini said. “They live and breathe this digital world we inhabit, and a growing trend has seen Gen Z slowly shunning traditional social media platforms--in the US, the number of teenagers on Facebook has dropped by almost a quarter in the past few years. And this is where gaming has increasingly become a social hangout by default, but not necessarily by design.”

In lieu of Facebook, many Zoomers are turning to gaming as a method of social interaction, and Rossini hopes to tap into this shift.

“We want to provide Crey as a social hangout by design, and cater to that social need and self-expression for users to have their own space to play games, create games, or just hang out.”

If Rossini’s pitch for Crey sounds a bit like a Stephenson-esque metaverse, you’re not alone. Many industry leaders have hinted at their ambitions for a living, breathing digital world that we can get lost in, but, realistically, Rossini doesn’t see that happening any time soon.

“A lot of what we do exists online and in data--it is created by coders and engineers and fits into a part of a brand ecosystem somewhere, but those are independent and not a collective,” Rossini said. “I remember Jesse Schell’s inspirational talk on Connected Object and Gamification at DICE 2010 and thought back then, ‘could we really be heading to a world where everything is connected?’ The reality is yes we can, but there are so many considerations for that to become part of our future--things like access, connectivity, monetization models, etc.”

That’s a ways off, though, and today the closest we can get to a metaverse is these creation platforms like Roblox where players can spend extended periods of time.

“They evolve, improve, connect, and foster fun, and that’s great for everyone to be part of those communities. Where we fit into this is that we are creating something with a lower barrier to entry: you don’t have to know coding and you don’t have to be great at playing games to benefit from being a part of Crey.”

Rossini likened the ambitions of Crey to his own adolsescence and another, far more basic social hub: his childhood bedroom.

“When I was growing up, the social hangout was the bedroom,” he reminisced. “That was a space to express yourself by the music you played, the posters you had on your walls, and the friends you chose to invite there to hang out with. It was your space and your rules. You would hatch a plan and go off on an adventure together with friends.”

This is what Crey hopes to replicate, albeit in a digital format. In this case, users’ social hub serves as the proverbial “bedroom,” where they can gather with friends and plan the games they want to build, or simply hang out.

“To be limited only by their imagination and go on incredible adventures together, or simply plan them in a space they feel is their own whilst chatting online with their friends and meeting new ones,” Rossini said.

Crey’s ambitions to build a social hub around game creation speaks to the medium’s growing influence on the entertainment landscape. As games and creation platforms become more sophisticated, users are coming to expect more out of these experiences.

“People don’t just play games now--they stream them, interact with them, compete in them, build communities from them, and live them,” Rossini said. “Today’s market is perfect for a new creation platform because not only have games evolved, enabling the user to do so much more, but the user has evolved, and they want more freedom to express themselves. They demand more and that’s what we aim to deliver.”

Moving forward, it will be interesting to track Crey’s progress in the game creation arena. It’s a tall order competing with the likes of Roblox and Fortnite, but blurring the lines between game creation and social media is an interesting--and ambitious--idea. Acquiring an audience is the biggest test, though, and it will be telling to see how Crey gets the ball rolling in this regard. For now, it’s impossible to deny Rossini’s enthusiasm.