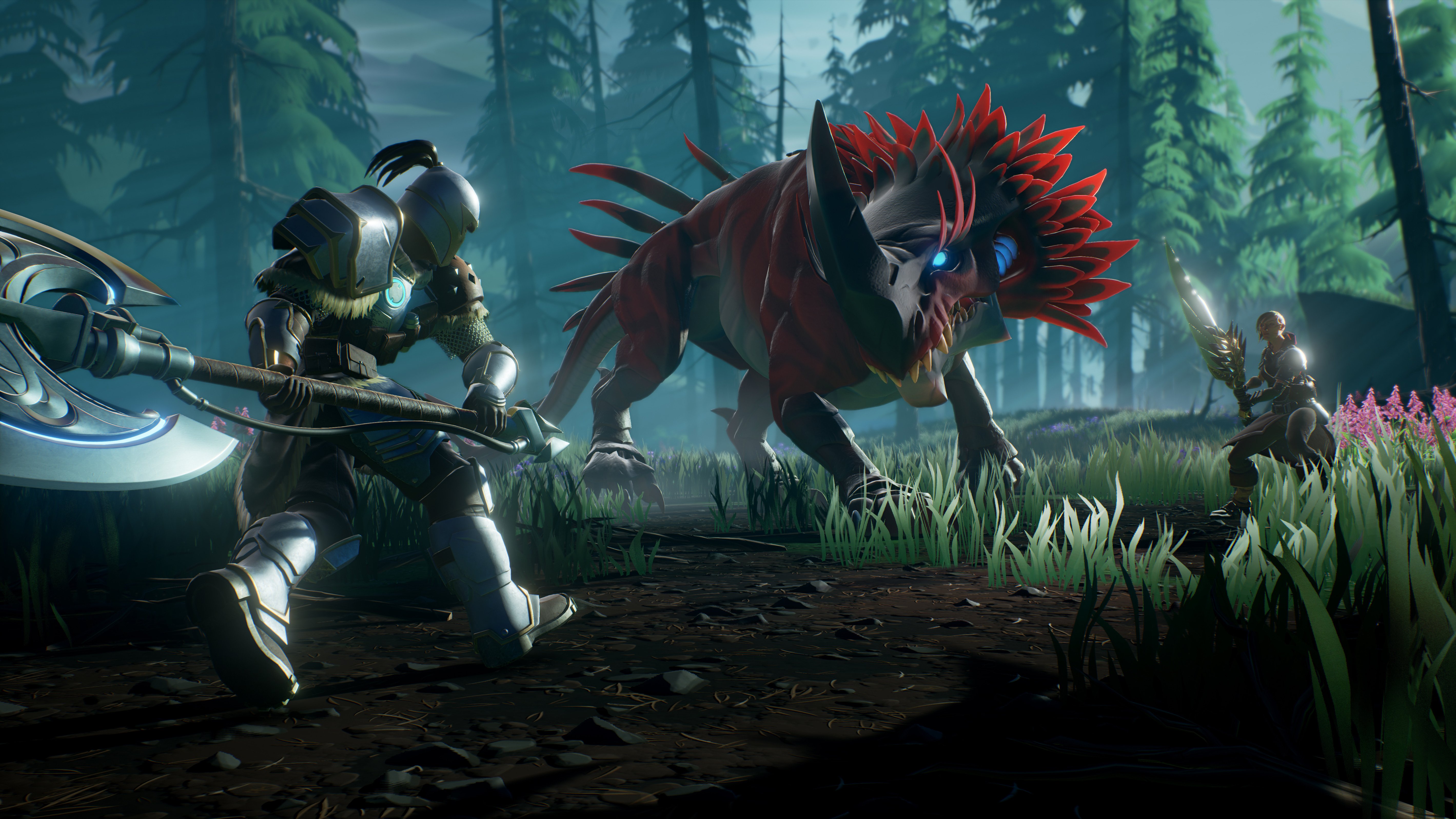 When Phoenix Labs set out to make its first game, Dauntless, its developers knew they wanted to make a free-to-play game that would have the legs to carry the studio for years. It needed a way to make it as easy as possible for players to group up together regardless of what platform they were on. Cross-play was a foregone conclusion for the studio.

Cross-play has become an expectation for players now that the biggest games in the world--Call of Duty: Warzone, Fortnite and Among Us, to name a few--use it to connect people across multiple platforms. Half a billion users played Among Us in November and December, meaning the popularity of these games has shoved cross-play into the limelight soon after console developers like Sony finally embraced it in 2018. Developers at studios like Phoenix Labs and Wargaming argue that cross-play is the industry’s future, but it's far from essential in designing a multiplayer game.

"Rather than prescribe everyone in the world to have crossplay, it boils down to what your goals are,” Phoenix Labs marketing director Nick Clifford said. “What's your vision for your community? Very early on, we knew the broad strokes of what we'd be building this online community with. We knew we wanted players to share the big water-cooler moments: things like ranking up to a new ranking, being able to share those with other players."

Phoenix Labs has been developing the cooperative monster-hunting RPG Dauntless since 2015. It launched in beta on PC in May of 2018. An early access version launched for PS4 and Xbox One one year later, and then a Nintendo Switch version launched at the end of 2019. Dauntless was an early cross-play adopter and that's one reason why it has amassed over 25 million players.

Over half of Dauntless sessions have had more than one platform, adding credence to the importance of cross-play. Clifford emphasized that cross-play was part of their original vision for the game. The Phoenix Labs team needed to consider it early, as its production process would need to be platform agnostic for it to spread to new consoles as development progressed.

Fortnite's bombastic success was becoming the trailblazer of cross-play, taking down barriers that many thought wouldn't be breakable. Epic Games found that more than half of Fortnite’s player base partied up with someone on another platform during a three month period in 2020. It also found that players who play on multiple platforms spent more than three times the amount that players who only play on one platform. Epic Games has used the battle royale's popularity to push cross-play into the discussions around the industry.

Sony was the last platform owner to hold out on cross-play, preventing Fortnite players from playing with other consoles or PCs. Sony eventually let up, opening cross-platform play in 2018. Console rivalries still exist despite the move, but for some, these rivalries are trivial.

"I think we're emotionally past those roadblocks," Clifford said. "The onus has moved from platform holders to developers."

That onus has weighty implications. We've seen some of the pitfalls that studios have run into with cross-play and the inability to port games to other platforms in 2020. Fall Guys, one of the breakout games of 2020, doesn’t support cross-play. Developer Mediatonic has talked about how difficult it is to implement features like cross-progression. Fall Guys has seen a considerable drop off in its player count and cross-play, and availability on Nintendo Switch and Xbox One may have alleviated some of that bleeding.

The challenge doesn't begin with cross-play either. Porting a game can be a major challenge all on its own. Supergiant, the developers behind the roguelike game Hades, has said that it is unable to port one of its previous games, Pyre, to other consoles due to decisions made early on in the development process.

"It's one of those things where, if it weren't extraordinarily difficult for our team, we probably would have already done it," Supergiant Games creative director Greg Kasavin said during an AMA on Reddit. "Pyre's development occurred before the Nintendo Switch was announced, so we had no way of accounting for its hardware."

"It's super daunting to ship on multiple platforms and add crossplay," said Thaine Lyman, a general manager for one of Wargaming's studios. Lyman manages the team behind World of Tanks Blitz, a standalone version of World of Tanks that supports cross-play between PC, mobile and Nintendo Switch.

The two versions of the game are separate because Wargaming found it challenging to create a version of the game that would put players from all platforms on equal footing, one of the many challenges of designing a game with cross-play in mind.

Teams also have to make specific changes to get their products on less powerful platforms, such as the Nintendo Switch, while letting those players square up against people using a mouse and keyboard. Dealing with all these challenges is an opportunity cost for small and mid-sized studios.

"It always comes down to prioritization," Lyman said. "For a smaller team, porting a game to a new platform is an undertaking."

Bringing a game to a new console is only the beginning. Studios need to dedicate resources to squash bugs, provide updates and address player concerns for months after launch on a new platform. The Nintendo Switch saw a gold rush of games after it launched in 2017, as its consumer base was hungry for more and more content. However, the trade-off is that some of those games were left to wither without fixes, leaving players unsatisfied.

The workload required to sustain multiple versions of games has only increased now that Sony and Microsoft have introduced a new generation of hardware. The PlayStation 5 and Xbox Series X give developers more power to work with but also adds to the plates of technical and platform engineers.

"Each new hardware cycle increases the cross-gen conversation," Clifford said. "Can a PS5 play with an Xbox One? Can an Xbox Series X play with a PS4?"

Every time a new piece of hardware launches, developers are inundated with questions about updates and support. Some teams will have the resources to keep up with new console releases, while others won't.

Cross-play has only just recently become more widely accepted as platform holders moved from rejecting it to outright promoting it. In the past two years, the industry has seen a number of games, including the most massive ones in the industry, adopt it. More studios will follow as the processes to make it happen becomes more widely known.

"At the beginning, it's super hard to get anything out when you're working at the high end of tech," Lyman said. "But by then, say five years later, the pathways are known."

Aron Garst is a Southern California based writer covering the game and esports industries. You can find his work on GameSpot, WIRED, and elsewhere.