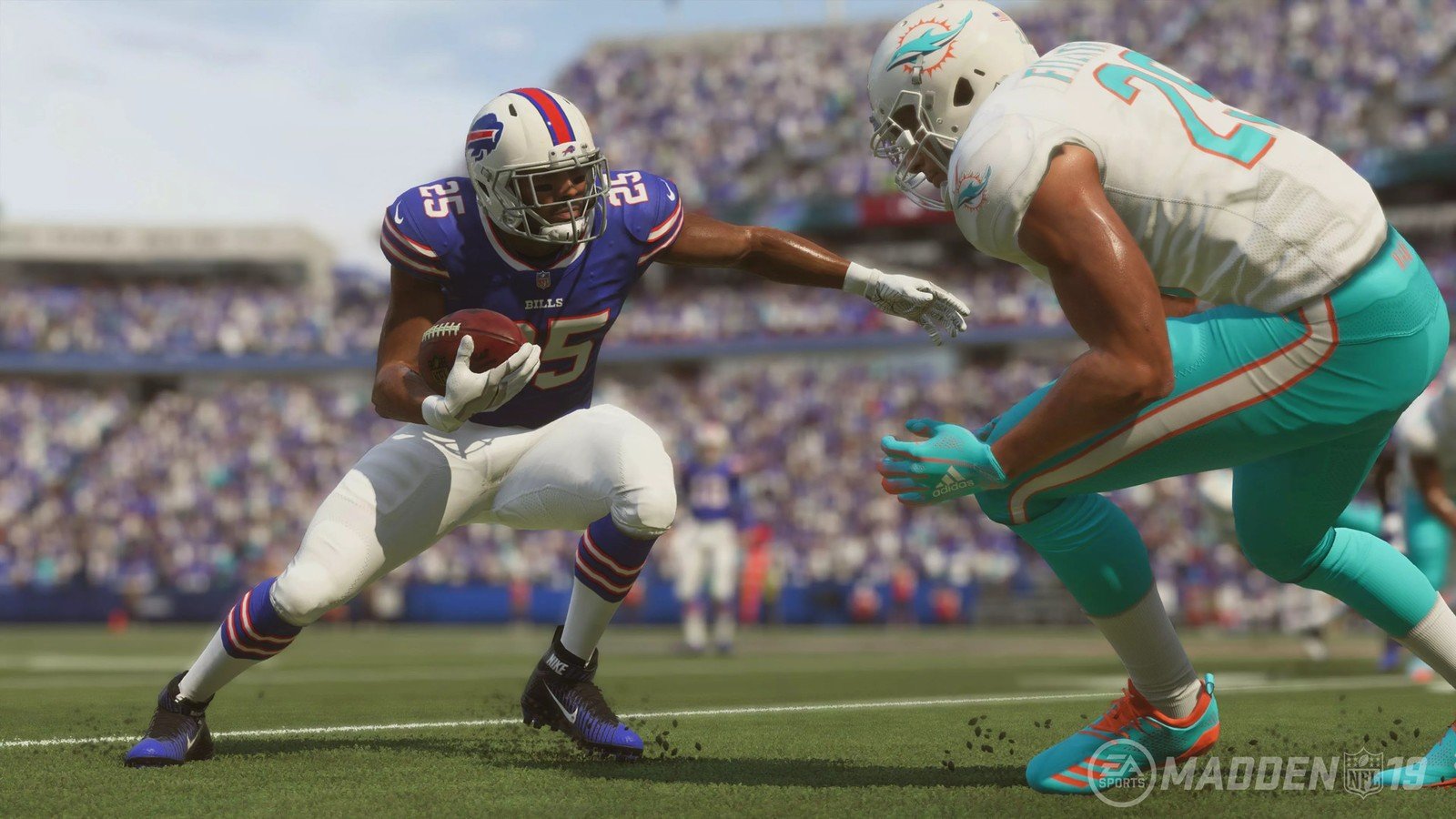 Sunday, August 26 was shaping up to be another lazy summer weekend day in the world of video game journalism. The big stories of the weekend on enthusiast gaming sites had already included the shutdown of online play for Motorstorm Apocalypse, the announcement of a Monument Valley movie in the works, and the coming launch of a comic-reading app for the Nintendo Switch. The slow weekend's news took a monstrous turn on Sunday afternoon, though, as reports began trickling in of a shooting at a Madden NFL tournament in Jacksonville, Florida.

Game journalists on call at the time kicked into a much more serious gear to bring the news to their readers.

"I was messaged maybe two dozen times within the first ten minutes," independent esports journalist and consultant Rod "Slasher" Breslau said in a recent interview. "I was outside walking my dog, tweeting a picture for national dog day... I was quickly notified that my dog picture may not be the best thing to tweet right now."

In those first few moments after early reports came trickling in, the reality of the situation proved hard to grasp for some covering the story.

You always feel so helpless in these situations. But I can do something that’s a very, very tiny thing. I can write about this, try to get as much right as possible.

"I went to this guy's Twitter feed, I'm thinking this has got to be a joke," Polygon's Owen Good said about his reaction when he first heard a tip of players tweeting about the shooting. "Even hearing the first gun shot and the people running away [in an online video], there's still cognitive dissonance in my mind. 'This is not real. This is a hoax.'... Pure disbelief is what I would say most of all."

Shifting quickly from stories about frivolous entertainment to stories of real violence can be jarring, but the journalists I talked to for this piece said focusing on the reporting actually helped them keep any unruly emotions in check.

"That quickness and seeing how everything unfolds, it’s still emotional but focusing on the facts and focusing on what happened and figuring out the confirmed details does kind of remove the emotional aspect of it," Dot Esports reporter Nicole Carpenter said. "For me, when I signed off for the day, that’s when everything sort of hit me what happened and that's when I felt really emotional about it. [Once it's over] you sit back and you say 'Shit, this happened again.'"

"I definitely felt the need to write about it to deal with it," GamesBeat staff writer Jeff Grubb said. "You always feel so helpless in these situations. But I can do something that’s a very, very tiny thing. I can write about this, try to get as much right as possible, and that's what I did."

"I wanted to let it get to me a little bit, so I could remember what I’m dealing with," he continued. "I didn't want to be too cold... for the most part the things we're writing about, they're toys, they’re digital little playthings. This is on a complete opposite end of that spectrum, if it's even on the same spectrum at all."

In those first few hours after the shooting, as conflicting reports of the still-unfolding situation started to appear, writers felt the familiar tension between getting it first and getting it right. Good, who used to report on the police beat for the Rocky Mountain News, told GameDaily that he was inclined to stick to official statements from police and other officials, but also worried that this might make his coverage too slow.

"I really wanted to speak to that anxiety [among readers] and say, 'OK, here is exactly what's going on,'" he said. "But at the same time there are so many details out there I can't confirm, I'm going, 'Am I slow-playing this? Am I behind the ball on this? Are we being too conservative?'"

In those chaotic initial hours, even reaching out to potential sources at the event was a balancing act.

You've seen what happened in the past when the internet and social media get out ahead of things and say so-and-so is the suspect. You can really wreck someone's life.

As the day unfolded, rumors started to circulate of a potential second shooter at the event, with some reports going so far as to give that supposed shooter's name. While some right-wing sites ran with that name, which was different from the one police later identified as the suspect, the journalists I talked to all decided it was better to wait to hear from police.

"You've seen what happened in the past when the internet and social media get out ahead of things and say so-and-so is the suspect," Good said. "You can really wreck someone's life." Carpenter agreed: "We aren’t going to be focusing on any rumors floating around on Twitter, we’re going direct to sources, like police departments, people on site to get our information."

Sunday's shooting in Jacksonville stood out from other mass shootings in recent years in part because the event was being streamed live on the Internet via Twitch. In the wake of the shooting, journalists faced an important decision in deciding just how to use that archived footage, which didn't show the shooting itself but included disturbing live audio of the gunshots and their aftermath.

Grubb said he initially embedded that video in his original story, but decided to change it to an external link (with a warning of graphic content) rather quickly.

"It's so easy for people to click play on a video," he said. "Later in the day, I saw someone who saw the video [on Twitter] before they saw the news... OK, yeah, you don’t want to do that to people."

The fact that the video was already out there, and easy to find on social media almost instantly, played a big part in that decision for some.

"Obviously people have seen the clip. I don’t need to post the clip," Breslau said. "I'm not a mainstream journalist putting it out to my readers who don’t even know what Twitch is or what a Madden tournament is. They already kind of knew what was going on, they could immediately find it on social media, Reddit, anything."

For others, though, the decision was more about their own values than general accessibility.

"It's a question of what readers expect from you," Good said of Polygon's decision to link to the video with a disclaimer. "The fact that it’s available and out there and everyone's talking about it, yeah that's reality, but we have to do things differently when you have professional expectations."

That said, Good continued, "If that camera had not cut away, and you actually saw... him getting shot and then falling off his chair and to the ground and someone falling over him, that I don’t know [if we would link to]. I would definitely have had a very senior conversation with somebody about whether or not to run that."

When Jacksonville police named a competitor at the tournament as the suspect in the shooting, apparently dead at his own hand, journalists had another important decision to make: whether or not to include the suspect's name in the coverage.

Carpenter said Dot Esports follows the Suicide Awareness Voices of Education Guidlines in how to report on mass shootings to limit the risk of "contagion" or copycat behavior in the public.

"It’s our job as reporters to present the facts but I think there’s a difference between presenting the facts and glorifying and focusing all the coverage on the shooter," she said.

I’d rather tweet the names of [victims] Trueboy and Spotme 40 times than tweet about the suspect because that will keep them in people’s minds more than anything else I could do.

Grubb agreed: "It’s a fact of the story, but he’s not the star."

Breslau, for his part, said he was torn about the decision but in the end decided not to name the suspect at all in his coverage.

"I’d rather tweet the names of [victims] Trueboy and Spotme 40 times than tweet about the suspect because that will keep them in people’s minds more than anything else I could do," he said.

Breslau even noted approvingly that some on social media were exclusively referring to the suspect as "the esports bitch boy" as a way to avoid using his real name.

"Of course the situation is not funny, but I smirked," Breslau said. "He'll never get recognition, he'll never be glorified for who he was, he’ll be known as a fucking 'bitch boy.' That really is an OK way to go about it to show anyone who wants to copy this, you’ll be known as 'bitch boy.' I think that deters a lot of people."

For others, though, going out of your way to avoid the name altogether just isn't worth the effort. "Bowdlerizing this by not naming the person is a bit of a namby pamby reaction that tries to make people feel good about something you just can’t feel good about," Good said. "Because two people are dead here. It's an insufficient salve, to my mind."

Aside from being a big story in its own right, the Jacksonville shooting has some game journalists thinking more directly about their safety at other video game events and tournaments.

"I was definitely thinking about [safety] for the first time in my life at E3," Grubb said, adding that he felt such shootings were getting more common at public events. "I'm getting older too, I have a kid now, another one on the way. I'm starting to think about worst case scenarios all the time. [Jacksonville shows] this isn’t out of the realm of possibility... I'm sure my mind will still go to those dark places when I'm at those events."

Some, though, said they find it better just to put the risk out of their mind.

"Personally, I can’t live my life in fear," Good said. "If I get assigned E3, PAX, Gamescom... I might in passing go, 'Hey is this really a a safe place?' but I'm going to do my job and not going to fret or worry about it."

"I am born and raised in NYC," Breslau added. "I've seen a lot of different things here. [I've] seen our freedoms in America try to be taken away. People trying to instill fear into [the] public is a big part of that. I will never let that affect me in the things that I love, be that gaming or whatever."