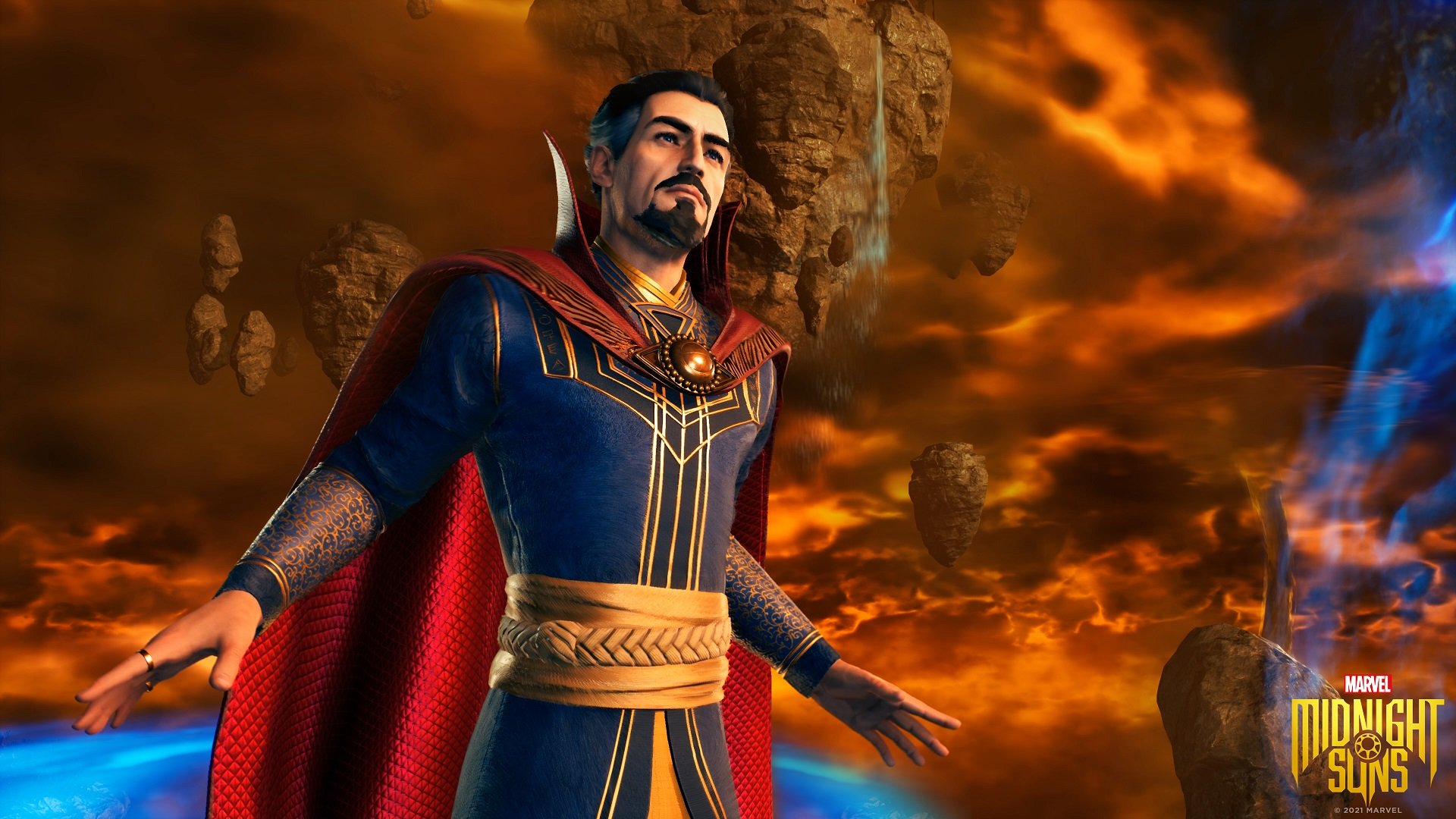 Late last month, as part of Gamescom 2021’s online event, Firaxis Games announced its next project. Marvel’s Midnight Suns is a tactical RPG that drops players into a world of heroes and villains. Here, an evil sorcerer named Lilith is wreaking havoc across the world and it’s up to Iron Man, Blade, Magik, and more iconic heroes to put an end to her machinations.

Luckily, they have a secret weapon: you, a lost child of Lilith known as the Hunter, and the only one known to have defeated her in the past. In an effort to stop Lilith’s machinations, Doctor Strange revives the Hunter, setting Firaxis’ superhero epic into motion.

In many ways, Midnight Suns is informed by Firaxis’ legacy of tactical and strategic experiences--it’s certainly not hard to compare it to XCOM upon first glance. In the weeks since Gamescom, however, the studio has released a couple in-depth looks at gameplay that highlight the fact that Midnight Suns is its own beast, a completely new and original take on tactical combat that had Firaxis stretching its creative muscles.

“That’s what makes Midnight Suns so exciting I think--this is a really different type of game that many Marvel gamers aren’t used to, and I’m really excited for people to discover the fun in tactics,” Jake Solomon, creative director at Firaxis for Midnight Suns told GameDaily.

Firaxis’ approach to combat in Midnight Suns is informed first and foremost by the superhero fantasy. Where XCOM tasked players with controlling a ragtag group of human soldiers against an oppressive alien threat, Midnight Suns falls on the opposite end of the spectrum. Here, you’re a powerful superhero, a tenet that is reflected in the combat. Solomon said this was a priority early on and helped direct many of the other gameplay choices.

“We wanted to keep the superhero fantasy at the front of your experience--any time in combat, you should feel like you’re the baddest person on the board,” he explained. “This meant that the mechanics that suited XCOM--things like taking cover, or having a percentage chance to miss--didn’t feel right for the type of experience we’re trying to create.”

The combat here is card-based, although Solomon doesn’t consider Midnight Suns as a full-fledged card battler. Rather, the card system is a way to make each character feel unique. Every hero has their own deck of skill cards, with new and upgraded cards being unlocked throughout the campaign. It was important to Firaxis that the characters start the game with a suite of strong abilities; they are superheroes after all.

Of course, the other side of this is that the game ought to feel challenging--it would be boring to have all of a character’s skills available at once. Thus the card system. On a turn, you’ll draw a hand of ability cards, and execute the actions available to you. The result of this approach is a balance of challenge and empowerment, and is a sort of reversal of XCOM’s combat mechanics. At least that’s what Solomon hopes.

Another significant aspect of combat is positioning and interacting with the environment. Your characters can utilize items and environmental hazards to deal extra damage to enemies, knock opponents into one another, and leap from raised areas for special attacks.

“Many abilities in Midnight Suns have knockback, and part of smart play in this game is being able to line things up just right to do the most damage, whether that’s whacking enemies into each other, or lashing an enemy into an electrical junction box to stun them so they can’t hurt you the next turn,” Solomon explained.

Outside of combat, the Hunter is able to freely explore the Abbey, a sort of hub area where your superhero companions hang out between missions. This is where you’ll engage with many of the RPG elements of Midnight Suns like character progression and optional dialogue. More than that, though, is the Abbey’s homage to the classic superhero mythos.

“Every superhero needs a secret lair, and that’s exactly what the Abbey is for the player,” Solomon explained. “Probably the biggest and most noticeable thing about [it] is that you explore this location in a third person, over-the-shoulder perspective as the Hunter. In the Abbey, you’ll greet your fellow superheroes each day, have the opportunity to develop Friendships with each character, Hangout, and even explore the hidden mysteries around the Abbey grounds.”

Like headquarters in the XCOM games, there are also a lot of base management things to do at the Abbey. Here, you’ll unlock and upgrade abilities, go on Hero Ops and missions in the War Room, and more.

The Abbey’s aesthetic also speaks to the overall theme of Midnight Suns. The story leans into the darker, more magical side of the Marvel universe, and the Abbey’s gothic design reflects this. Adding to the tone is the fact that it is located in Salem, Massachusetts.

For Solomon, the opportunity to work on a game set in the Marvel universe is the realization of a lifelong goal. As a fan of the comics from a young age, he grew up with many of the characters and settings present in Midnight Suns.

“I loved reading Marvel comics when I was a kid and the opportunity to create something in the Marvel universe was never something I had even considered,” he said. “It’s really about wanting to do justice to the heroes that we have and tell a story that Marvel fans can enjoy.”

Solomon explained that Firaxis was approached by Marvel to make a game set in the world of the comics.

“It turns out that many members of the Marvel Games team are huge fans of XCOM! Sometimes you hear that and it’s just being polite, but they had real specific feedback on things like the finale mission of XCOM, which made me really happy because it meant they understood the types of games that we make.”

Because of this understanding, Solomon said that Firaxis isn’t under a lot of pressure to deliver something outside of the studio’s comfort zone. Rather, the only pressure comes from the team’s desire to make the best Marvel-themed game it can. In that way, Midnight Suns is a kind of passion project, a sentiment expressed by Solomon.

“I think the fact that my team and I get to create something new in the Marvel universe, being such huge fans of Marvel ourselves, is really a dream come true,” he said. “I’m really excited about introducing some of the characters to fans for what may be their first time seeing or learning about these heroes. I mean, Magik is in the game because she’s my favorite Marvel hero.”

Marvel’s Midnight Suns is scheduled for a March 2022 release.