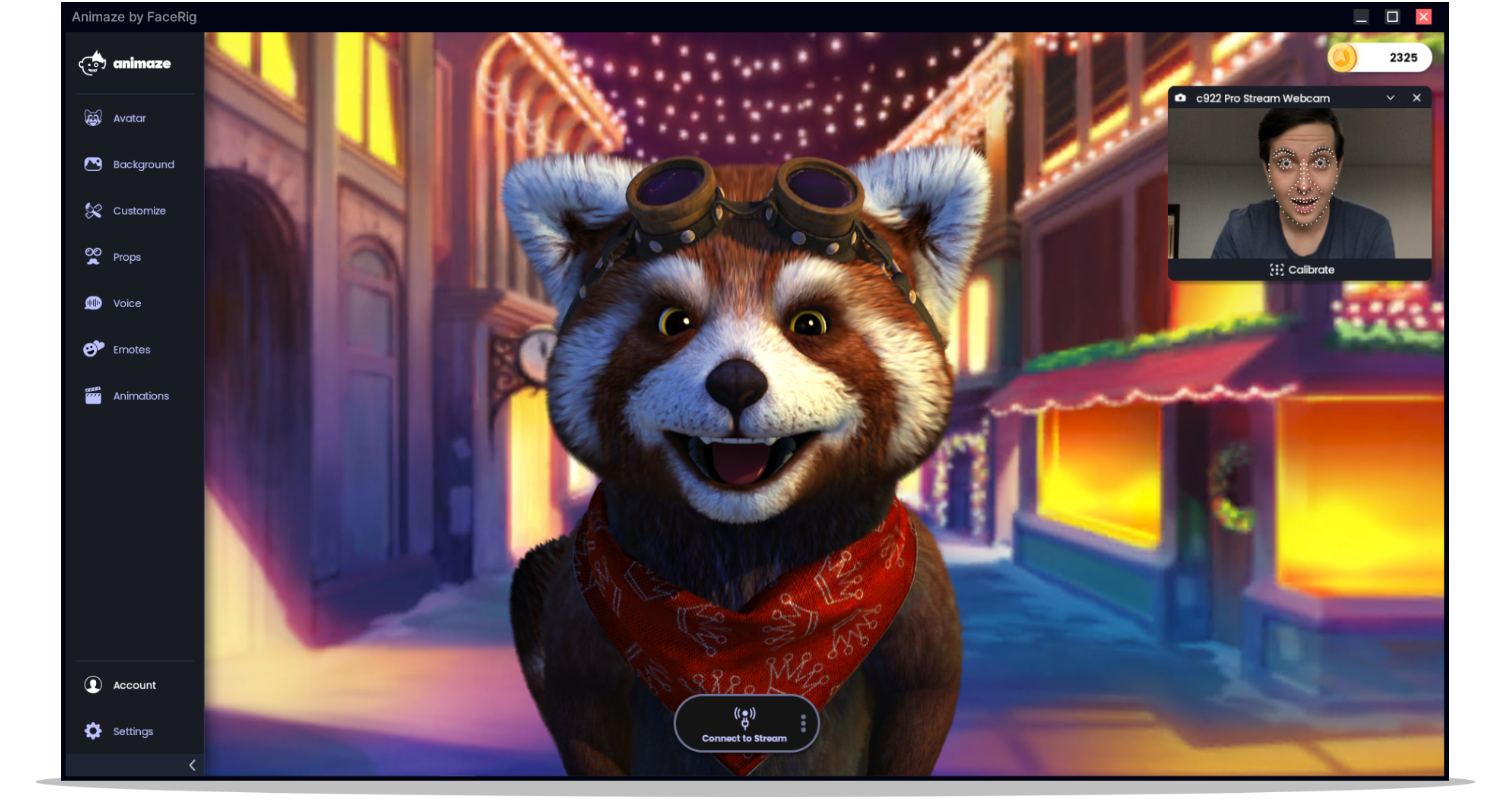 The conversation around the relationship betweenvideo games and human behavior often takes a negative turn, but one company is looking to change that perception one adorable tiger at a time. American-Romanian group Holotech Studios is behind the new motion-capture avatar technology Animaze that seeks to help people forge connections and explore their personalities without sacrificing privacy or exposing themselves to harm.

Designer Dragos-Florin Stanculescu and his team at Holotech worked in game development for several years, but harbored a desire to make a positive difference using their experience in programming and motion capture. The initial result was FaceRig, a digital avatar program built around expression, but it wasn’t expressive enough for Stanculescu. After extensive re-development based on community feedback, Holotech released Animaze in late 2020. It’s a brand-new technology built on FaceRig that works with mobile hardware and PCs and lets users create an idealized digital representation whose movements and emotions match their own.

A 2010 TED Talk from author and game designerJane McGonigal about how people could apply skills gained from playing games to real life gave Stanculescu his first stirrings of inspiration. McGonigal focused on the intensity and dedication games can inspire, but Stanculescu and a few others took a different approach on why people feel more at ease acting outside their comfort zone in games.

“My hypothesis was about anxiety, or fear of judgment,” he said. “When you're a hero or certain character, you have a lot less fear of being judged and a lot more confidence in who you are. So if we could take that kind of ‘stepping into the shoes of that character’ and give that superpower to people everywhere where they interact online via webcam would that superpower come to life more?”

He had a personal reason for pursuing this idea as well. Stanculescu described himself as a “nerdy kid” who enjoyed coding, video games, and digital art, but struggled with communication and anxiety. He said one of the things he loved about games is the feeling of living someone else’s life for a few moments and, hopefully, taking a few of that character’s qualities back into his own life.

It’s a feeling of courage he wants to kindle in others with Animaze.

“The definition of tragedy is wasted potential, and it hurts me to see wasted potential in people who are locked in by anxiety,” he said. “Providing this path for myself and others is a way we’re trying to help overcome those barriers.”

Animaze is more than just putting a cute animal face over your own and calling it a day, though. For one thing, not just any kind of cute animal will do. Stanculescu and his team dug deep into the psychology of perception, particularly Jean Baudrillard’s idea of hyperreality. Baudillard believed the postmodern era had shifted away from reality, where people preferred idealized representations of something that didn’t exist over reality itself.

The idea normally carries negative connotations, as Stanculescu said. People pursue ideas of beauty that can never exist, he said, while marketers rely on supernormal stimuli to foster a primal need for that ideal, be it physical attraction or even just food. However, he believes there’s just as much potential for using hyperreality and supernormal stimuli for good.

“It was frustrating that overly idealized people on the cover of the magazines had all the hyperreality advantage thanks to Photoshop and good marketing, but people at home had none of that,” Stanculescu said. “Enabling people to step into the shoes of the avatar gives them the same ‘hyperreality supernormal stimuli power’ that the marketing agencies have, and we’d like it to be a great equalizer in terms of opportunity.”

It was important for Animaze to promote a human connection and not be just another part of the VTuber phenomenon, Stanculescu said. Holotech sees value in the kind of influencer culture that’s sprung up around VTubers and even created tiers of Animaze to serve streamers who want to build it into their routine. He described that as a practical move to help the business grow, though, and said the goal was always pushing the boundaries of digital connectivity, hence Holotech promoting Animaze as free VTuber software as well.

“What we want to unlock--and that's trickier to accomplish--is genuine, emotional connection through avatars,” he said. “We want to enable the feelings and the emotion that people see on your face, somehow be transported [to] the face of the Avatar.

“If everybody is special, then no one is, so if everybody has this special [superstimuli] power then it doesn't matter as much as it matters before. What matters is the actual communication [and] the emotion that carries over, and what we've seen with the pandemic and isolation is that we do need connection. We do need to co-regulate our emotions with people who are close to us, we need to be able to express these emotions, and the other person needs to be able to interpret those emotions.”

Stanculescu said that becomes much more difficult when trying to interact with people one might not know as well, or when venturing into what he called the “Wild West of the Internet” to try and make new friends or join a new group. Early Animaze adopters said using an avatar gave them the courage to enter new spaces they were too intimidated to join before out of concern for how they looked or even fear of discrimination.

Others’ early efforts to create a metaverse,such as Second Life, fell short of achieving this goal for a reason similar to why Stanculescu believes early VTubers didn't establish emotional connections; pressing a button to activate a response can never replace actually seeing someone smile, he said, whether it’s a smile on a human face or an impossibly cute tiger face.

Rather than people becoming dependent on these “hyperreality wings”--as Stanculescu called them--for their emotional satisfaction, he believes creating an idealized physical persona will free the user to explore other aspects of their personality.

“Once we learn that achieving the ‘perfect appearance’ is relatively easy, it allows us to progress and to understand that looks alone are not what makes us special,” he said. “With this noise eliminated, it allows us to get to know and develop other aspects of ourselves. By contrast, in physical reality, radically changing how we look is not always possible or requires a lot of resources that most people don't have. As such, the lesson takes longer to learn, leaving some people in the physical world chasing a hollow unattainable goal their whole life. AR/XR avatars can help us see that idealized looks are merely an entertainment tool or a means of expression.”

He said he also hopes Animaze helps encourage people to explore facets of their personality they might otherwise not have a chance to develop--or have the freedom to develop. Stanculescu said the Oscar Wilde quote “Man is least himself when he talks in his own person. Give him a mask, and he will tell you the truth” was another key part of his guiding philosophy, one that extends to difficult, even potentially dangerous, truths.

Stanculescu used his own experience growing up in communist Romania as an example and said he hopes Animaze gives people the sense of freedom similar to speaking up at a town hall-style meeting, but without fear of recognition.

“Societal or political norms might make us think ‘I shouldn't say that because I know some people might get upset or offended,’ but that doesn't change that there are things we truly believe and want to express, but fear of repercussions and recognition holds us back,” he said. “Removing some of these repercussions can be really freeing and actually allow people to bypass a lot of their own personal traumas and anxieties.”

Holotech is still rolling out Animaze and refining it through new avatar themes, refining body tracking, and supporting the community’s own efforts through making Animaze an open-source platform.

“We are always going to want to improve the embodiment experience, and ideally we’re chasing this goal of Pixar in real time,” Stanculescu said. “It's my job to never be happy, and I need to always be pushing the envelope. Solving genuine human emotional connection to an avatar is a tremendously large and complex task, and there's going to be work to do for years to come.”