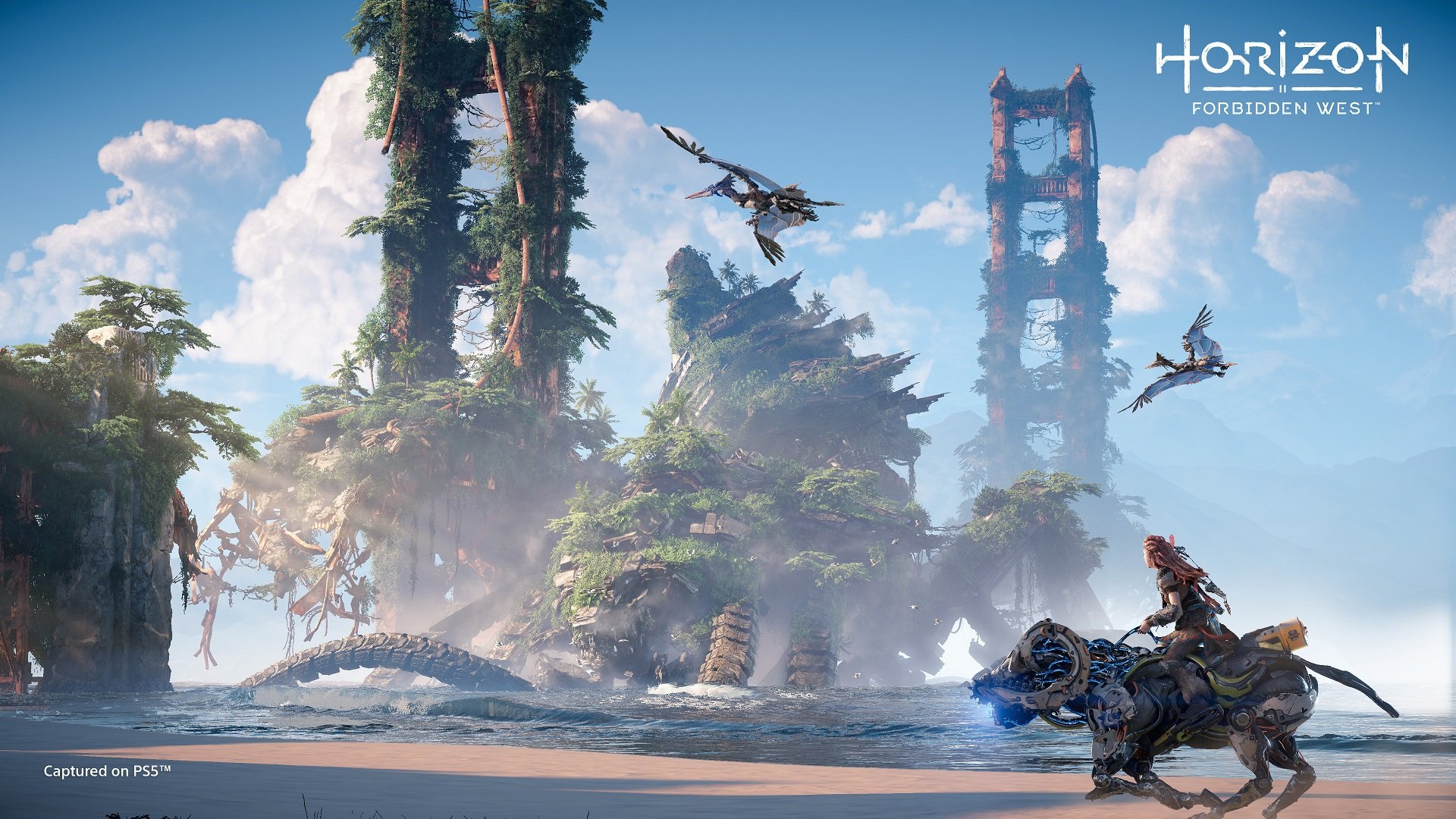 This week marks the release of Horizon Forbidden West, Guerrilla Games’ anticipated followup to 2017’s ambitious open world action-RPG. Considering the latter’s reputation for incredible visuals and thrilling robot dinosaur-based action, expectations for the sequel have been sky high. With the review embargo now up, it sounds like these expectations have largely been met, giving Sony yet another notch in its first-party belt.

By most critical accounts, Forbidden West is a visual beauty. Among reviewers, this was one of the most universally-praised aspects of the game, with many calling attention to the lush plant life and sprawling vistas of a post-apocalyptic western United States.

“Horizon Forbidden West, especially on the PlayStation 5, is breathtaking; it’s one of the most impressively realized wilderness games I’ve ever played,” Polygon’s Nicole Clark wrote. “On PS5, you can regularly walk from interiors right into the wide world, without loading screens.”

“The world is the star of the show,” Wallace wrote. “Forbidden West is a technical marvel, with breathtaking vistas, vibrant underwater corridors, and lush jungles. Every locale has its own flavor; just wait until you see Las Vegas.”

Guerrilla has provided players with a handful of new tools to traverse this larger world, including a Breath of the Wild-esque glider and a grappling hook called the Pullcaster. Critics were more divided on the implementation of these items, the grappling hook in particular, calling it too situational for true environmental traversal.

“...Don't think of this as being a game-changer on the level of Halo Infinite's Grappleshot or Just Cause’s grappling hook before it,” IGN’s Simon Cardy wrote. “In Forbidden West it's much more of a puzzle and combat tool used for getting out of sticky situations than it is something that will help you zip around its world.”

Cardy was much more keen on Forbidden West’s combat, though, noting that Guerrilla has greatly improved on the first game’s emphasis on elemental weaknesses and part-breaking encounters.

“The combat in Zero Dawn was already fantastic, and Forbidden West only stacks more options on top of that--such as new weapons and ammo types--and feels better and more flexible than ever as a result.”

Some reviewers, including The Washington Post’s Alyse Stanley, were more critical of Forbidden West’s combat, observing that it felt clumsy and oversaturated, a result of sequel-borne bloat.

Story-wise, Forbidden West is a direct continuation of Zero Dawn that sees protagonist Aloy traveling westward to head off another human extinction event. For the most part, critics praised the game’s writing and acting, calling it a marked improvement over Zero Dawn’s already-beloved cast of characters and twisting sci-fi plot. Importantly, Forbidden West also seems to feature a more diverse cast than its predecessor.

“While there were a handful of memorable characters in the original game, developer Guerrilla has made every single person you interact with in the sequel feel unique and interesting,: GamesRadar’s Sam Loveridge wrote. “There's a beautiful array of diversity here too, including non-binary representation and characters with disabilities, which is an interesting conversation to be had in a tribalistic world.”

Admittedly, that tribalistic world has drawn ire from critics who felt that the characters that populate the world of Horizon were a derogatory caricature of Native American culture. When Zero Dawn released in 2017, many journalists published op-eds on this subject, including a much-discussed blog by writer Dia Lacina. Lacina called specific terms typically associated with Native cultures, and decried the industry’s supposed lack of attention on this aspect of Zero Dawn.

Following the publication of Lacina’s piece, Waypoint interviewed John Gonzales, the narrative director of Zero Dawn and Forbidden West. Gonzales said that the narrative team was very sensitive to how it handled depictions of Native culture. The efforts were not satisfactory for some critics, however, including The Gamer’s Stacey Henley, who said Forbidden West does little to address any perceived Native appropriation even if individual characterization received some attention.

“There is no attempt to interrogate or explain the Native American appropriation either,” Henley wrote. “It’s too baked into Horizon’s formula for them to abandon it, but the game seems to use that as an excuse to shrug it off. One of the game’s best armours even sees Aloy don a chief’s headdress. However, there is more individuality here--tribes are still spoken about in broad terms, but individual people within those tribes rarely live up to those broad definitions and are their own distinct characters.”

Significant attention was paid to accessibility, it seems, though some still found these features lacking. According to Inverse’s Christopher Groux, Forbidden West boasts a suite of difficulty options and traversal assistance options, but falls short elsewhere.

“While I only need minor visual cues that don’t involve most of these settings, I can’t help but feel this area of Horizon’s accessibility could be improved,” Groux wrote. “A sci-fi setting allows creative latitude for plenty of in-universe UI hints and audio cues that would make the world easier to navigate. I wish accessing the more all-encompassing visual features didn’t involve leaving the game to plumb the depths of the PS5’s console settings menu.”

In all, the critical consensus on Horizon Forbidden West is largely very positive. It would seem that Guerrilla has taken everything players liked from Zero Dawn and iterated. Some, like Kotaku’s Ari Notis, called this approach very safe, but that doesn’t stop Forbidden West from being a stellar experience.

“Make no mistake: despite its comfortably familiar trappings, Horizon Forbidden West is a tour de force,” Notis wrote. “Its sprawling world feels alive with a tangible vigor many open-world games can only dream of. Not since The Witcher 3: Wild Hunt have I played side-quests as invariably engrossing as these.”

Sony and Tencent acquire a combined 30% ownership in FromSoftware shares

Rumors of an acquisition continue to swirl.

The purchase signals an interest in the mobile sector for Sony, who has been testing the multi-platform waters.