GameDailydotReview: Kirby and the Forgotten Land 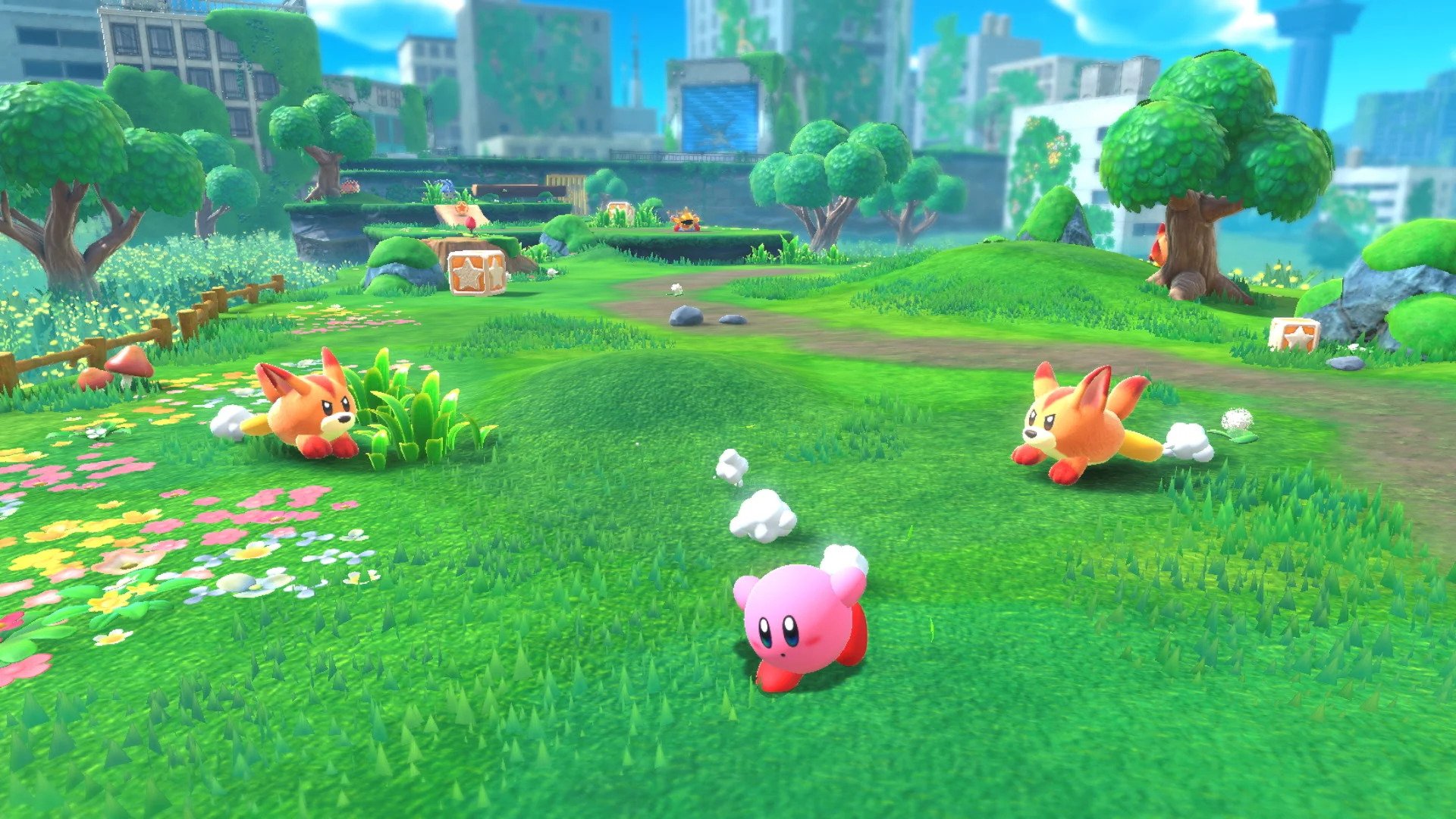 Last week saw the release of Kirby and the Forgotten Land, the newest adventure starring Nintendo’s lovable pink puffball. As a 3D platformer, it serves as a sort of transition from the series’ traditionally 2D gameplay. The change appears to have been well-received as the critical consensus is that Forgotten Land is a high point for the Kirby franchise.

“I’m an easy sell when it comes to Kirby, but Forgotten Land is easily one of my favorite entries in the series, and possibly my top game outside of Kirby Super Star (an all-time classic). I came in expecting a very serviceable Kirby adventure and got a lot more, but with those same straightforward and effortless virtues that past games have commanded.”

That’s according to Destructoid’s Chris Carter, who praised the game’s move-at-your-own-pace progression. Each level is scattered with hidden objectives and collectibles, which encourages replayability without feeling mandatory.

“Since these missions are initially hidden, I find that they encourage me to take the time to really appreciate each stage and search every inch,” Wald wrote. “All of the objectives show off the creativity of the levels and make the most of the different locations. There's definitely an additional challenge in working out what the side objectives are--I can't resist jumping right back into a stage if I miss any the first time around.”

For Game Informer’s John Carson, one of the highlights of Forgotten Land is “mouthful mode,” which sees Kirby inhaling and controlling inanimate objects to solve environmental puzzles.

“Mouthful Mode is a lot of fun and does a great job of breaking up each level, and each transformation brings a different pace and gameplay hook to mess around with,” Carson wrote. “Plus, it easily brings a smile to my face whenever Kirby finds another ridiculous and helpful  gadget to envelop.”

Another aspect focused on by critics is Waddle Dee Town, the game’s hub area. As players complete levels and secret objectives, the town will become increasingly populated and expand to offer a handful of new features. There’s a gashapon capsule machine, a movie theater where you can watch past cinematics, and, most importantly, a power upgrade shop.

As in previous games, Kirby can inhale and steal the powers of his enemies. The upgrade shop in Waddle Dee Town allows players to augment these powers, which offers some flexibility to Kirby’s abilities. For IGN’s Tom Marks, this was a fun, if basic, addition to the Kirby formula.

“Blueprints hidden in levels (or sometimes just handed to you after big fights)...will unlock upgraded versions of specific abilities that you can buy with stars and coins, like giving your cutter two blades instead of one. That helps keep them fresh all the way through, even if it very rarely changes how you’ll actually think about using them in a given situation,” Marks wrote.

Critics also agreed that Kirby and the Forgotten Land is not a difficult game, which, depending on the reviewer, was seen as a flaw or a boon. For Polygon’s Ryan Gilliam, it was very much the former; the critic lambasted Forgotten Land’s supposed lack of variety and challenge.

“The moment-to-moment gameplay is so monotonous and simple that it kills the pace,” Gilliam wrote. “With nothing new to look forward to and such a small number of tools at my disposal, I can’t focus on the majesty of the world or how cute its protagonist is.”

In a review for The Verge, Ash Parrish agreed that the game’s formula grew stale before too long, and its world felt empty.

“You can retry levels to aim for the Waddle Dees you missed, but there’s no sense that doing so will reward you beyond checking an extra box,” Parrish wrote. “There’s nothing to uncover, no branching path to possibly find, only the satisfaction of saving a poor… whatever the hell a Waddle Dee is and another super cute two-second cutscene of Kirby and the Waddle Dee rejoicing in freedom.”

Kirby and the Forgotten Land features a drop-in/out co-op mode that allows a second player to control “Bandana Waddle Dee.” The ease with which you can play with a friend was praised by most critics, but some found the actual mechanics of co-op to be frustrating; unlike Kirby, Bandana Waddle Dee cannot copy enemy ability, and he tethered to Kirby, meaning he cannot explore as freely.

“While he's the coolest Waddle Dee due to the bandana, I do wish that there was a colony of different color Kirbies like there are Yoshis,” GameSpot’s Steven Petite wrote. “The Copy and Mouthful abilities being limited to Kirby means that one player doesn't get to partake in the most interesting aspects of each stage. This is particularly noticeable during Mouthful sections, as Bandana Waddle Dee has to rely on Kirby to do his thing to move onto the next section.”

Still, the general consensus is that Kirby and the Forgotten Land is a warm and inviting time, an ideal family game for those seeking an undaunting gaming experience. Eurogamer’s Martin Robinson perhaps put it most succinctly:

“Like its predecessors, Kirby and the Forgotten Land's an open-armed thing, and now more than ever before it's a game that's for absolutely everyone, the move to 3D platforming perhaps the most significant step forward in the series' history. This is an absolute hug of a game, and quite likely Kirby's best outing yet.”