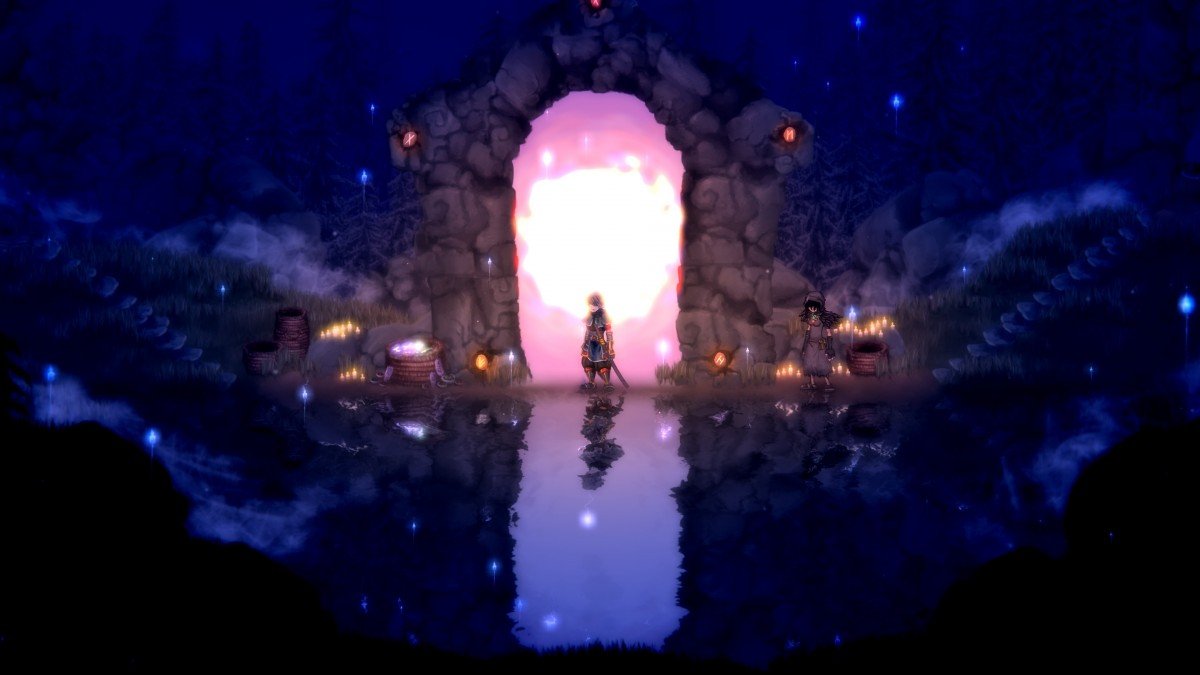 In 2016, game developer James Silva didn’t expect a ton from his then-in-development title, Salt and Sanctuary.

“The previous game I’d made, Charlie Murder, had a sort of weak reception, so that very much set the bar,” Silva told GameDaily. “Imposter syndrome is quite real!”

But it didn’t take long for that bar to be surpassed. When the game launched, it was a hit. Its Dark Souls-inspired gameplay earned it high marks from critics, as well as a fairly sizable, passionate fanbase. To this day, many still affectionately refer to the game as “2D Dark Souls”--high praise in an industry that has been influenced so much by FromSoftware’s iconic series.

Six years, several ports, and many copies sold later, Salt and Sanctuary has gotten a sequel: Salt and Sacrifice. While the “Soulsborne'' influences are still as present as ever, Silva admitted that he decided to look a little further beyond FromSoftware’s catalog this time around. When development started in 2019, the game-maker turned his eyes toward Capcom’s Monster Hunter franchise.

“Salt and Sacrifice began as an exploration of Monster Hunter-style mechanics in a 2D Soulslike world,” Silva said. “It’s a concept I’d been wanting to see since before I made Salt and Sanctuary.”

The chart-topping Monster Hunter series is known for its multi-stage hunts, where players rely on clues to track down a specific monster, and then try to take it down as quickly as possible. Sometimes, the beast tries to escape to a safe spot, in which case you’re expected to chase after it to resume the hunt.

Sacrifice’s Mage Hunts follow a similar tune. You pursue Mages--the game’s main bosses--across the map, dealing out small bits of damage every time you catch up to them. Eventually, the pursuit comes to a halt, giving way to a more traditional boss fight.

“I’m really proud of [them],” Silva said of the mechanic.

But Silva knows there’s more to Monster Hunter than just hunts; cooperative multiplayer is another key part of the experience. Silva initially planned for Sacrifice to just feature local co-op, but after talking it over with co-developer Shane Lynch, the two decided that the game would also include a fully-featured online component.

Lynch, who spearheaded the development of Sacrifice’s multiplayer mode, is particularly proud of how it’s turned out.

“We wanted to make playing with friends as seamless and rewarding as possible [...] and I think we’ve achieved it,” Lynch said. “Want to quickly drop into a random player’s game and help them beat a boss? We have that. Want to play with another friend for hours without interruption while you both progress in your games [...] ? We have that too.”

However, all of this isn’t to say that the developers necessarily stopped looking to other Soulslikes for inspiration. Outside of the Dark Souls trilogy, Silva admitted that Team Ninja’s Nioh and the ever-popular Bloodborne were particularly influential on the game, with the latter’s impact perhaps most evident through Sacrifice’s “cursed hunt” theme.

While Sacrifice differs in multiple ways from Sanctuary, veterans of the latter are still sure to feel right at home in the former. What might throw previous Sanctuary players off, however, is the sequel’s significantly more vibrant color scheme--a stark departure from Sanctuary’s heavily desaturated visuals.

“I think it’s a reflection of my journey as an artist,” Silva said. Acknowledging that both Sanctuary and his prior Dishwasher series of games all prominently featured desaturated color pallets, the game-maker stated that he views Sacrifice’s development as a chance to learn about using color in his games, and he’s not particularly worried about how it’s received.

“If everyone hates it, we’ll put out a desaturation hotfix; we’ll call it the despatch patch,” Silva mused.

Jokes aside, one aspect of Sacrifice that has drawn criticism is the PC version’s Epic Games Store exclusivity. Over the past few years, as the digital storefront has grown into a well-known platform in the video game industry, more and more developers have opted to release PC versions of their games exclusively on Epic’s store--at least for a limited time.

Many consumers have previously criticized the service, primarily due to issues with Epic’s launcher. However, addressing the elephant in the room as the interview drew to a close, Silva argued that doing business with Epic has paid off greatly as an independent developer.

“When you are two people working on a game like Shane and I are, [...] you work hard and try your best. But whether you sell 100 or 100,000 copies is completely out of your control,” Silva said. “Exclusivity arrangements often function in a way where even if the game is a catastrophic dud, the developer can keep a roof over their head.”

“I will say that working with [Epic] is super refreshing. I’ve been doing this for about 15 years, so I’ve seen a bunch of digital platforms mature, and I’ve noticed that each platform’s early stage is just completely awesome for developers. We get so much special attention, it’s wonderful. I hope EGS grows and is successful, but the personal attention they’re able to devote to developers now is something rare and incredible to a team of our size.”

And based on the above-average critical consensus, it’s clear that the added financial insurance, as well as the extra attention given to the developer, have both greatly benefitted Salt and Sacrifice--a game not just built on the backs of titles like Dark Souls and Monster Hunter, but also both Silva and Lynch’s ambitions as artists.