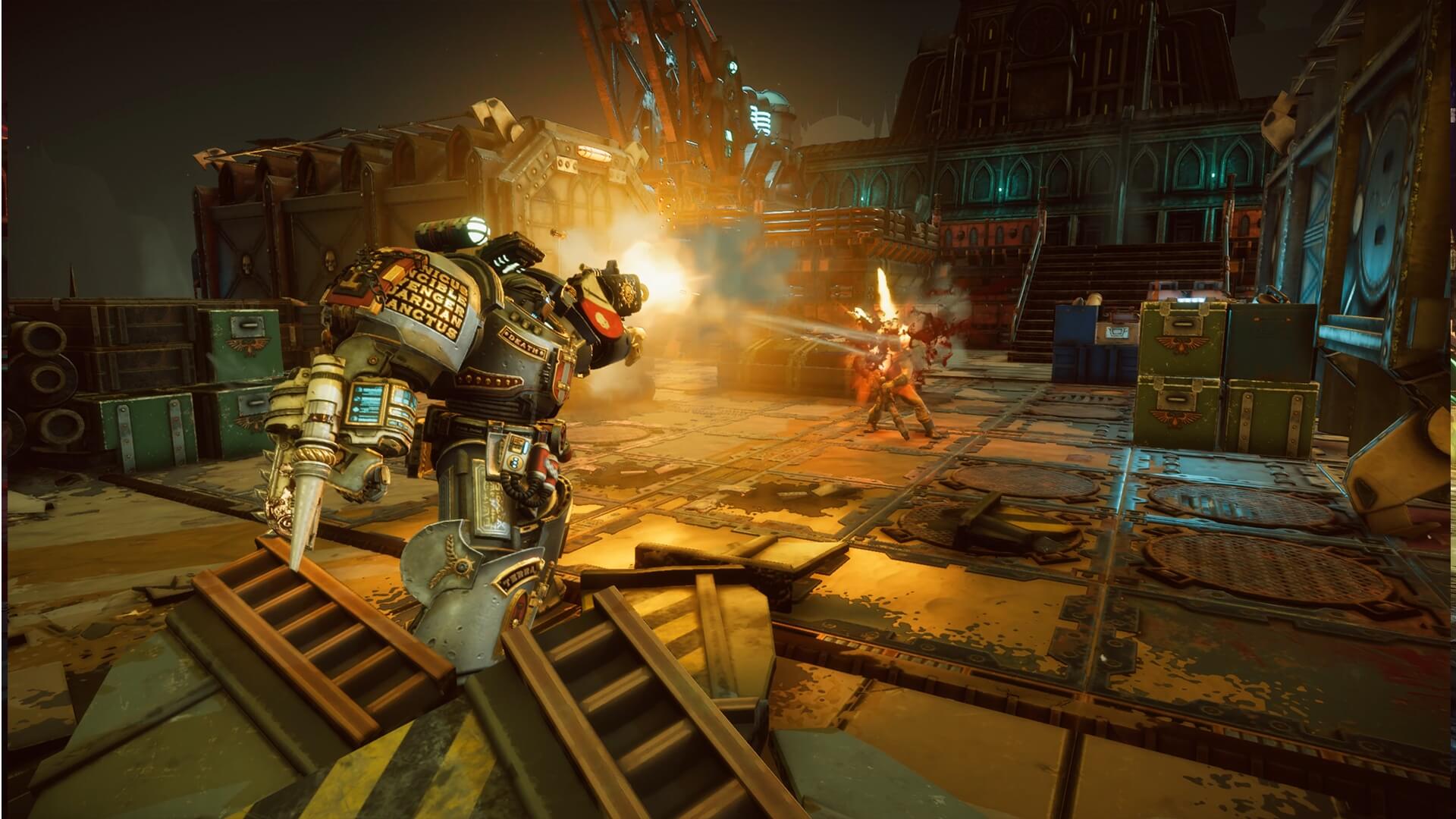 Earlier this month, Canadian developer Complex Games and publisher Frontier Developments launched Warhammer 40,000: Chaos Gate - Daemonhunters, a turn-based tactics game set in the eponymous grimdark, far-future world. Built in the vein of genre titans like Xcom and Gears Tactics, Daemonhunters garnered accolades from critics upon release. As of this writing, it is sitting at a cool 82 on Metacritic, with outlets like PC Gamer praising the game’s combat and between-mission story beats.

For Complex Games, Daemonhunters is the culmination of years of working with the Warhammer 40,000 license. The developer’s first foray into that universe came in 2013 with mobile title The Horus Heresy: Drop Assault. Following its success Complex was granted the game’s publishing rights by Games Workshop, the creators and owners of the Warhammer 40,000 property.

Much of the Daemonhunters DNA can be traced back to Drop Assault, according to Noah Decter-Jackson, creative director and CEO at Complex Games. Many of the tactical elements of Drop Assault laid a foundation upon which Complex has been building ever since.

“[We] learned a lot about working in the 40K universe from that experience,” Decter-Jackson told GameDaily. “We also learned a ton about crafting a great tactical experience from that project, which carried across nicely to making Chaos Gate - Daemonhunters.”

Unsurprisingly, Complex Games is made up of several hardcore fans of the Warhammer 40,000 tabletop miniatures wargame. Decter-Jackson himself began collecting and painting minis 30 years ago. Of the several primary factions in the game, Decter-Jackson is a long-time Ork player, but has since branched out into the Aeldar and Tyranids.

“More recently I’ve started collecting some Death Guard,” Decter-Jackson added, “and other members of the team at Complex collect a variety of Warhammer 40,000 armies, so we have a huge level of passion for the different factions.”

Chaos Gate - Daemonhunters is primarily concerned with the Grey Knights faction, which is a division of the Space Marines, the flagship faction of Warhammer lore. Players assume command of their own squad of Grey Knights in a galaxy-spanning battle against daemonic forces of chaos.

Rather than attempt to recreate verbatim the rules of the tabletop game within a video game, Complex allowed the grand aesthetic of the Warhammer universe to inform much of the gameplay of Daemonhunters.

“With the visual design of the game we wanted to reflect our own love for the miniatures and the vibrant canvas Games Workshop uses to represent the factions in the 40K world,” Decter-Jackson explained. “I would say a lot of the aesthetics of the tabletop experience informed how we presented the gameplay, too, but the mechanics are really down to trying to create a tactical videogame experience that approximates the right ‘tone’ for the 40K universe, rather than trying to replicate any rules from the tabletop.”

The result is a game that is “one of the best Xcom-likes out there,” according to IGN’s review. This kind of success is, of course, the result of years of refinement on the part of Complex Games, which has gotten quite comfortable with the Warhammer 40,000 license. Since launching Drop Assault, Complex has built up a lot of trust with Games Workshop, Decter-Jackson said. Additionally, the two companies collaborated closely throughout the years-long development of Daemonhunters

Despite the comfort and familiarity, however, there was still a lot of pressure on Complex to develop a game that honored the Warhammer 40,000 name.

“There’s no single objective way to portray Warhammer 40,000 in a game, because this universe partly lives inside the imaginations and expectations of the audience, official Games Workshop artwork, multimedia fiction, and all sorts of other materials,” Decter-Jackson explained. “That’s what makes it different to adapting a TV show or a movie. The pressure is to try and live up to the varying expectations of players--but also make our own distinct mark in the pantheon of games in the IP.”

This to say nothing of the challenges of building a turn-based tactics game in a post-Xcom world. When approaching the genre, Decter-Jackson said that Complex wanted to learn from the best while taking its own distinctive approach to grid-based combat. One of the methods was to eliminate a fair degree of randomness from attacks. As such, Daemonhunters doesn’t feature an accuracy stat for its soldiers. Instead, damage is calculated based on distance and line-of-sight. After all, the Grey Knights are genetically-engineered psychic soldiers who aren’t known for missing their shots.

“Removing accuracy from most attacks was the foundation we started with--we wanted to make sure the tactics reflected the experience of commanding these are genetically engineered soldiers, so the dynamics of our combat missions had to be plausible on that level,” Decter-Jackson said.

Complex also wanted to make a game that was less about playing defensively and more about taking the fight to the enemy, a tenet in line with the aggressive nature of the Grey Knights. Additionally, highlighting the psychic powers was a priority. Most soldiers in Daemonhunters have access to a pool of Willpower points that let them use all kinds of abilities. This arsenal gradually opens up throughout the course of the game, allowing players to specialize their soldiers however they want.

One of the features Decter-Jackson is particularly proud of is precision targeting. When attacking an enemy, players can target specific body parts. Depending on what you aim at, you can remove an enemy’s abilities or reduce their movement range. You can also perform melee executions on weakened enemies, which grants your entire team additional action points for that turn.

“We’d also draw attention to the fact that players eventually unlock access to Exterminatus in this game, too, which is a last-ditch action you can perform to essentially obliterate the surface of a planet and stop the game’s galactic plague, the Bloom, in its tracks,” Decter-Jackson added.

“Likewise Robyn Addison--who players might recognise from Final Fantasy XIV: A Realm Reborn--helped us shape a great character in Inquisitor Kartha Vakir. Across the board, we felt this level of performance added an extra layer to the quality of storytelling in Chaos Gate - Daemonhunters.”

All of these elements combine into a complete package that Decter-Jackson is very proud of. Complex Games set out to “create a tactics-meets-strategy game that draws [players] into the world of Warhammer 40,000 and the conflict of the game.

“That means more than just mechanics, but introducing a meaningful plot and characters to contextualize the purpose of why you are doing what you’re doing as a player,” he said.

It’s far and away the most ambitious project for Complex Games thus far, and Decter-Jackson said that it has been gratifying to see so many players enjoying the game.

“We’re a small studio and we put everything on the line to do this.”