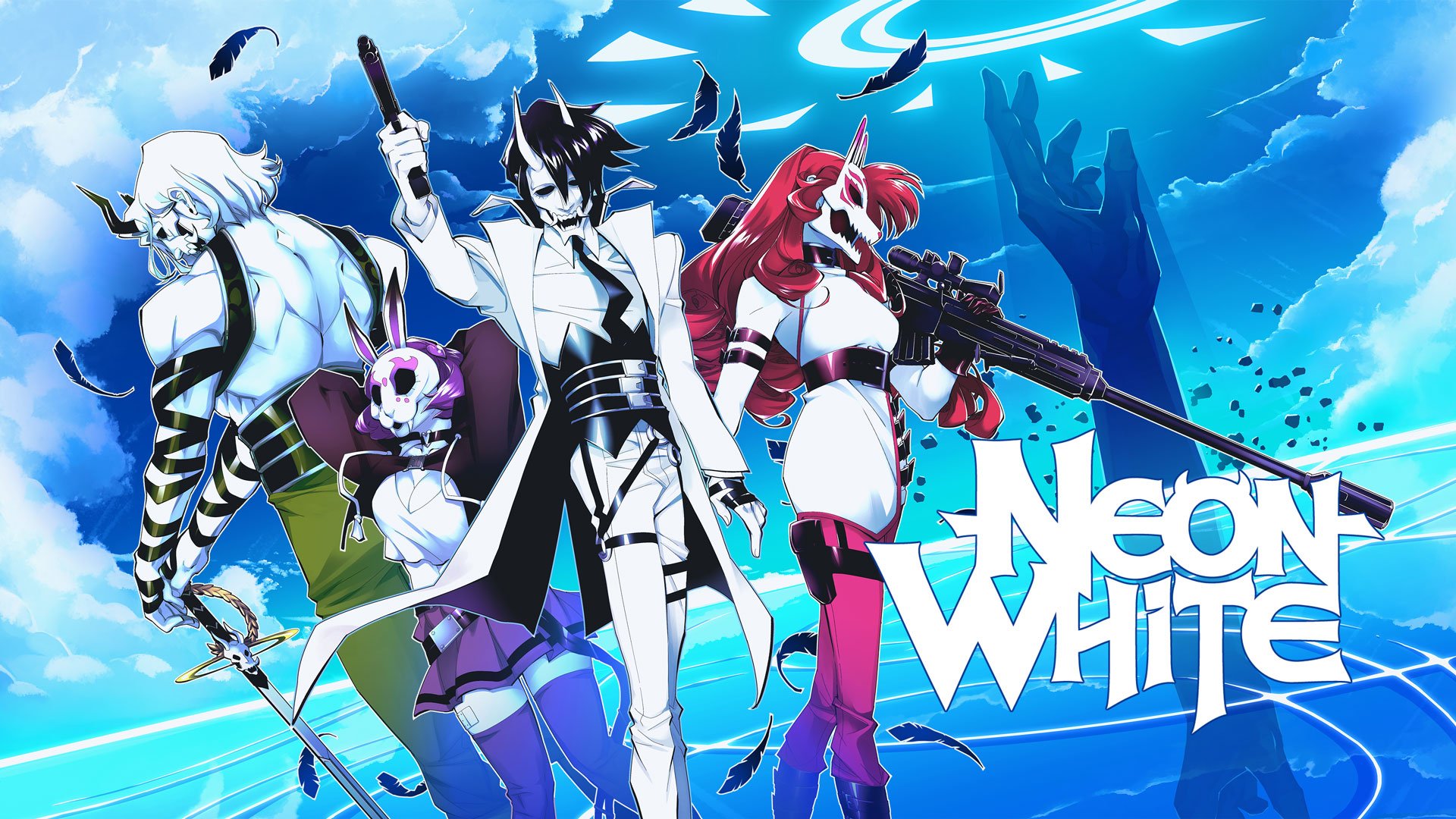 In June, Annapurna Interactive published Neon White from indie developer Angel Matrix. The small studio is led by Ben Esposito, the one-person dev behind indie darling Donut County. As a follow up, Neon White is a far-cry from the sinkhole-sim gameplay of that game, a decidedly purposeful change of pace.

“I didn't intend to, but I worked on Donut County for six years, so by the end of the project I was ready to move on to something completely different,” Esposito told GameDaily. “My work up until then was very focused on this idea video games were not even close to reaching their potential as an artform. I believed I had to think completely outside of convention in terms of mechanics, aesthetics, theme. My goal for Neon White was to explore what I love about video games.”

Neon White is a first-person puzzle platformer with an emphasis on speed. The game is built around a series of bite-sized levels with the goal of getting to the end as quickly as possible. Scattered throughout each stage are weapon cards which grant one-time use movement abilities such as a double jump, a forward dash, or a powerful stomp.

While speedrunning is the primary hook for Neon White, Esposito said that this wasn’t always the case. The game began life as a more traditional shooter where players would be forced to manage scarce ammunition across a wide arsenal of weapons.

“I just didn’t like it!” Esposito said. “So I started with concept of the weapons that could be discarded for extra abilities, and when passing it around to friends we found it was really fun to use the discard abilities to try to complete levels faster and faster, so we ended up designing everything around that.”

In most cases, while zooming to the end of a course, you’ll need to dispatch all the enemies before the goal unlocks, but weapon/ability cards are lost after you use them for their movement. In this way, Neon White is still very much an exercise in resource management as in Esposito’s original vision.

Dual-use cards can be a lot to think about, especially in a game centered on going as fast as possible. As such, it was important to Esposito that each stage was presented in such a way that the objectives were simple and easy to understand.

“Clarity was the most important feature when building levels,” Esposito explained. “One tool we use for that is consistent messaging. Red doors mean they're breakable with an ability and they always represent the path forward. Ivy and plant detail almost always means that you're going in the right direction. Waterways give you a speed boost and they always flow in the direction of the main path.”

Level layout was the foundational tool for guiding players, according to Esposito. Since Neon White is so fast-paced, each stage and encounter were designed to be quickly readable.

“When the player enters into an encounter, we make sure that within less than a second they can clearly see the challenge (enemies, platforming) and the resources for overcoming the challenge (cards) all without turning their camera. The other stuff is just details.”

This, Esposito said, is Neon White’s “magic trick;” stage layouts are designed to keep players on track without thinking. However, in order to lower their completion times, players will need to mentally work out the best order in which to use abilities and scour each stage for shortcuts like one might in a racing game.

One of the most distinguishing features of Neon White is its setting. The game takes place in literal Heaven, where the amnesiac main character finds himself following a mysterious death. As a “Neon,” White is given a chance for eternal salvation if he can beat out a handful of other Neons in a demon-slaying competition.

White’s relationship with the other Neons is central to the game’s story. Slowly, as White deepens his bonds with them, they’ll reveal bits of his life on Earth and the complicated situation that landed him in Heaven. Much of this is played out through a social system not unlike those seen in the Persona or Danganronpa series. In fact, Esposito cites them as inspiration behind Neon White’s relationship mechanics.

In most levels, you can find collectable “gifts,” which will deepen your bonds with the various side characters. Doing so can unlock bonus levels, insight into a character’s past, and fun dialogue.

“We built the story and characters to provide context for the action and to be a nice break from the breakneck pace of level optimization,” Esposito explained. “We had the idea for adding collectible items to every level as a sort of puzzle that gave players an opportunity to explore the levels. Originally, they were just going to unlock bonus levels, but we ended up integrating the collectibles with the characters as a way to wrap the very disparate concepts in the game together.”

When asked if setting the game in Heaven was a reflection of his own religious beliefs, Esposito said that his own faith certainly figured into development. However, the team at Angel Matrix was more drawn to how Heaven as a concept has been depicted across popular media throughout history.

“We like the absurdity of depicting Heaven and how Heavenly depictions often manage to feel both garish and austere at the same time,” Esposito said. “My faith definitely played a role in exploring religious subject matter, though not in a way that I wanted to spread my beliefs, but to instead as an exercise to explore what I believe in.”

As a total package, Neon White is a sort of amalgamation of several different gameplay elements: part FPS, part relationship sim, part resource management. On paper, this combination feels like it has the potential to be a bit unwieldy. According to critical consensus, though, the final product is a smooth and novel experience.

“…Neon White is still a blisteringly stylish speedrunning platformer,” PC Gamer’s Natalie Clayton wrote in their review. “It is the kind of game I could easily imagine sinking hours into just to get myself into the top 10 of a single track…”

Esposito said that the team is appreciative of all the positive feedback. And though they didn’t set out to make something to please everyone, it has been affirming to see that most players are greatly enjoying Neon White.

“I'm really proud of our small team for making so much good content, and how we managed to stay 100% committed to our weird, specific vision,” Esposito said. “It's really validating to see that there are a lot of folks who played the game and appreciated the vibe and the unintuitive way the game came together.”