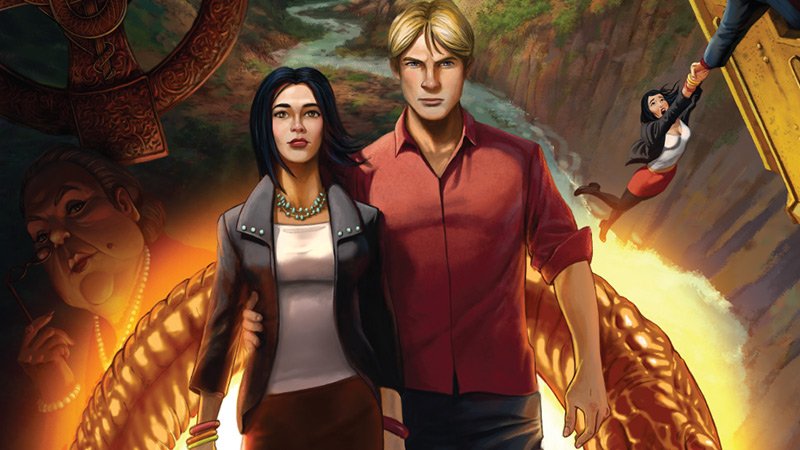 Charles Cecil, the legendary British game designer and managing director of Revolution Software, wouldn't be where he is today without a vibrant games community behind him. Revolution recently announced a Switch version of Broken Sword 5. That's not a surprise by itself, since everything seemingly makes it to Switch now, but the classic adventure franchise began over two decades ago, and without its passionate community there’s no way these games would have such longevity.

Over the years that Cecil has spent in the industry, he’s seen the notion of a game “community” rise and fall.

“I hate to admit it but I actually wrote my first game on the Sinclair ZX81 in 1981,” Cecil says. “Back In those days we'd meet up with our ‘community’. Obviously we didn't call them community then; they were just fans of the series. We talked to them and it was great. I remember very well the first time somebody asked me to sign their game and it just was extraordinary. I was about 18 or 19.”

As the games industry began to grow, so too did publishers form, filling the void between game developers and retailers. With no Internet through which to distribute games and with the majority of games being made in teenagers’ bedrooms, they would be copied onto floppy discs and hand-delivered to shops to sell. A developer’s reach was therefore about as far as a bike ride or, in extreme cases, a bus journey.

“When we started working through publishers and retailers we lost contact with our community,” Cecil explains. “Really the only way that we had any sort of inkling of what people were saying was via journalists and magazines. And that was great. We would read what people said.”

The industry stayed in this state for decades, with magazines and journalists acting as a go-between for players and developers. Obviously that’s all changed now, but a lot of how the games world works is still stubbornly tied to those old traditions.

“Then two things happened around 2007/2008,” says Cecil. “The first was that Apple phoned us and said, ‘We think your game would work well on iPhone’ and ‘We will support you if you were to port them’. Secondly. slightly later, Tim Schafer did his Kickstarter [for Broken Age]. At that time Revolution was effectively insolvent, because Broken Sword 3 had made THQ a profit of about $5 million, but had made us a loss of just over 200,000 pounds -- which took us 10 years to pay off. It just was not sustainable.”

Apple invited Revolution to include the original Broken Sword in their Twelve Days Of Christmas promotion. At first Cecil was skeptical, but it was a fantastic triumph.

There are examples where developers thought they were bigger than their community, but it's really not like that.

“We had two and a half million downloads in one day,” Cecil recalls. “And we sat there and our minds were blown. But even better, Apple were really excited. They were sending us updates over the weekend. The person who organised it showed us that Broken Sword had entered the top 10 most tweeted keywords in the world.”

So began Revolution’s plan to start a Kickstarter campaign for a new Broken Sword game. Apple had just proved that there was an audience and they’d managed to build up enough money off the back of the Twelve Days of Christmas promotion that it wasn’t an enormous risk. And Tim Schafer had just proved that adventure games could do big numbers on Kickstarter. Broken Age was, at the time, the highest-funded game on the crowdfunding platform by a large margin, with over $3.3 million raised.

With that, Revolution was reunited with its fans and the Broken Age community shone anew. Their first action? Telling Cecil and the rest of the studio that the main character’s chin looked a bit wonky.

“And they were right!” says Cecil. “So we changed the chin and we said, 'Thanks very much’ and suddenly we realised that we were in this virtuous circle. We really valued the comments that people were making, but they also really appreciated the fact that we were listening to their comments. The really funny thing is that like five years earlier, we would have paid a fortune to get the market research that not only were we getting for free, but they really appreciated the fact that we were taking it seriously.

“It became quite clear that it was our relationship to screw up, rather than the other way around. So Revolution projects became 'Our projects' because they were sharing the journey and it was really important to me that we honoured that commitment.”

Some of this may seem obvious nowadays, but it’s increasingly surprising how many developers misunderstand the importance of the community-developer relationship. They either lean in too heavily on the side of appeasement, or simply don’t listen enough. “People who don't listen to their communities are fools,” Cecil reiterates. “There are examples where developers thought they were bigger than their community, but it's really not like that.”

So what makes Broken Sword such a strong franchise 24 years after its 1994 debut? Is it simply nostalgia?

“The most extraordinary thing was when we did the iPhone version in 2009 and it got a Metacritic score of 91,” Cecil says. “The idea that 14 years later you could redo the game and it would still score so highly was unbelievable. We were lucky that it works very well on touch screens and on the iPad and on the Switch. We were very lucky to have a genre that translates fairly fluidly between different UIs.”

The adventure game genre, with its relatively low-fi interface makes it one of the most accessible and versatile genres. For that reason, while the genre might have evolved, they never really went out of vogue for the audience they served. Sure, it’s not the most mass-market style of gameplay, but those who play them tend to really love them.

“Some people don't like point-and-click adventures, some people feel the games are a bit slow,” Cecil explains. “But we have 50,000 Kickstarter backers. We'll probably sell a million copies of the game. Adventures are niche, but they're a very, very sizable niche.

“The other rule that I would put out there is that the control system is primarily cerebral rather than requiring manual dexterity. But then Quantic Dream would say that's nonsense because they've had success with Heavy Rain and other games that clearly do require manual dexterity. Personally, I think they're still slightly outside the adventure family. Which is fine! That's not a criticism. But I would define an adventure as having cerebral, rather than manual dexterity at the heart of the gameplay.”

This cerebral gameplay style amps up the accessibility, while weaving the story inside the game’s goals make it a much more cohesive experience for narrative fans. An adventure isn’t an adventure without a tale to tell, but an FPS can pay lip service to story while still offering fantastic gameplay.

“For our games, of course, story is absolutely vital,” Cecil says. “But in Fortnite, if you're playing against 100 people, the story is the experience that you have. It’s as simple as that. And, for example, the fact that during the World Cup people were dancing the Fortnite dances. A story doesn't need to be told by a storyteller, at all. People will weave their own stories in. But I think in an adventure you have to have a degree of at least multilinearity so that there's the sense that the player is discovering the story in the way that they choose to, rather than the way storytellers specifically tell them.

The adventure genre is very, very crowded because so many developers loved adventure games growing up and are making their own. You're more likely to be successful creating an Angry Birds type of game than an adventure. Adventures are a huge amounts of work.

“Emergent narrative is great. We play with emergent narrative as well, but computers are not good at writing stories. Stories are all about human experiences. They're not about computer experiences. A lot of people think I'm talking nonsense, but I think that a great story is written by a human being based on human experiences. And then emergent stories fit around that... But the beginning, the middle and the end and the core ideas I think will stick around for many, many years to come.”

Multilinearity means giving players meaningful choices, but it doesn’t necessarily mean that each player will experience a different ending. In fact, Cecil believes that vastly different endings could detract from a game’s overall story.

“It's really difficult coming up with one ending,” he says. “Weak endings come about, even in films [and] books, because all of the component parts didn't quite make sense. So coming up with one ending is the climactic point at which everything that you've done makes perfect sense. It's the point at which the dominos fall back and you go, 'Oh my god that's why all this is happening'. I think nuancing the ending, so that it's molded itself to the way that you've chosen to play the game is fantastic. But multiple endings, that's what Sierra were doing 10, 15, 20 years ago.”

So what advice does Cecil have for developers looking to make an adventure game? In short: maybe don’t. Or at least try your hand at something else first.

“The adventure genre is very, very crowded because so many developers loved adventure games growing up and are making their own,” Cecil explains. “You're more likely to be successful creating an Angry Birds type of game than an adventure. Adventures are a huge amounts of work. Very expensive. You do get a fantastic community who will do their very best to support it, but my advice would be think very carefully.

“Angry Birds, because it used a public domain physics engine, it could have been made by talented students. One artist, one level designer and somebody who knew a little bit about programming. You could have had those three and they could have come up with Angry Birds as a university project. They could have done it within a few months. An adventure game is a commitment for years and years and years…”