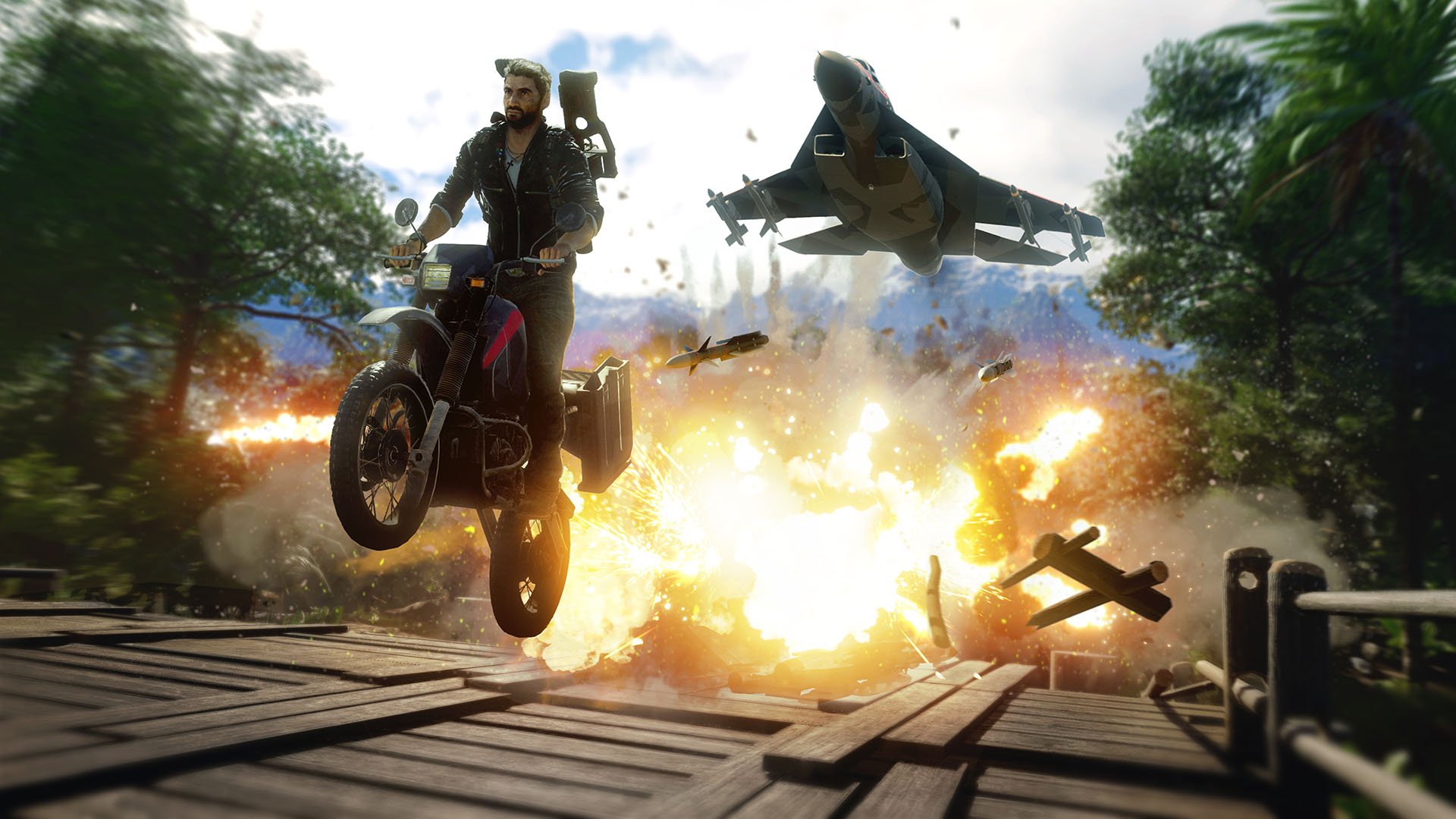 Avalanche founder Christofer Sundberg says the Just Cause series started with the idea that a player should be able to skydive out of a plane and land on a moving car. Over four entries in the series, that ethos has remained consistent, even as developers added bigger explosions, a wingsuit, and the unbridled destructive power of tornadoes.

Speaking to GameDaily at New York Comic Con, Sundberg, Narrative director Omar Shakir, and senior producer Chris Supino pulled apart the Just Cause formula to decode the franchise’s DNA. As it turns out, a huge piece of what sets Just Cause apart from other open world games is its love affair with bugs.

It’s not a bug, it’s a feature

When development started, Sundberg had the idea that he wanted to get a player from high in the air safely to the ground. But the means to make that work weren’t entirely clear. It was a the QA process that gave Avalanche the idea for two of Just Cause’s defining elements: the grappling hook and hero Rico Rodriguez’s parachute.

Just Cause’s grapple gun (later a wrist-mounted grappling hook that doesn’t need to be equipped) began as a debug tool. A member of the team was tired of running around to get to different bug locations and programmed the ability to zip Rico to any point the player could see. It worked so well that it was implemented as one of the franchise’s defining features.

The same philosophy applies to accidental occurrences that happen as Just Cause’s multiple, layered systems interact. “As long as the game doesn’t break, it’s not a bug,” Sundberg says. “Players getting stuck or things like that are obvious bugs.”

Even if something doesn’t actively break the game or hinder the player, it might not make the cut. There’s a level of trust built between player and developer that demands that systems behave with a measure of predictability.

“A lot of times when we see bugs that are 100 percent repeatable and something cool happens, most likely we’re going to stick with that,” Supino explains. “Now, the player has another tool in their kit. If it’s something that doesn’t happen that frequently or is hard to master, it’s less likely. We want to be consistent if we’re embracing something as a feature, it’s part of a system now.”

Repeatability isn’t the only factor. Sundberg is adamant about ensuring that the game doesn’t break, and there are more ways than player hindrance to disrupt an experience. Just Cause 4 is build on the idea of player choice and variety. Preserving that freedom is crucial to Avalanche’s philosophy.

“One of the things we look for is whether the player will only do this thing,” Supino says. “If that’s the case, we won’t want to do that, because then the variety is gone. All of a sudden, all the videos you see are all the players doing the same thing. That’s not what we’re about. We’re incredibly mindful of that. Everything we do is at a systems level, and we have to think of the implications of something of that nature. We can get a lot of different types of bugs and that’s kind of the trick: understanding that razor and really understanding the existing systems. For that reason, as a developer, you need to know so much more about your game than if you were doing a linear experience.”

How much freedom is too much?

Bugs aren’t the only challenge for Avalanche as they add more systems to Just Cause 4. The extreme weather (tornadoes, electrical storms, and more) adds another layer. Players can visit one of the four different biomes and experience a different natural hazard that can wreak delightful havoc. Flying into a tornado is perilous, but whipping out of it is exhilarating.

Trust plays a role here, also. Avalanche has to put its faith in the technical design and artistic direction as it welcomes players into Just Cause 4’s sandbox.

“The challenge is that the game might break,” Sundberg says. “But that’s the fun part also, because we encourage so much experimentation with the world. It’s a mental hurdle to get over to just let your players go into the world and trust the systems to work properly. There’s so many combinations of what you can do that we can never really predict what will happen.”

Sundberg says that Avalanche has worked to find a balance. Just Cause kept players too rigidly on a narrative path. Just Cause 2 left players with a bit to much freedom, as nearly all limitations were removed. In Just Cause 4, the team is focused on putting player choice and gameplay cohesion on a scale.

“We want to give players the ultimate freedom in an open world,” Shakir says. “But some players want the concrete story and understanding of context. The biggest challenge is balancing those two things. That was a big focus for us in JC4. We wanted to tell a bigger and better story and talk more about Rico Rodriguez and his past. At the same time, we allow the player to step into Rico and live out these over-the-top, crazy, action moments and let their imaginations run wild. Resolving these two things—the freedom of the player avatar and the nature of the context of who Rico Rodriguez is—is the most difficult challenge.”

Just Cause 4’s South American island, Solís, is large (as big as Just Cause 3’s 400 square mile Mediterranean Midici). Traversing the map is part of the fun, but Avalanche doesn’t want to constrain players based on story beats. There’s not much joy in working your way all the way across the island only to find out you need to double back to the start to progress the narrative.

Avalanche has thrown out the idea of a critical path (a specific beeline through a game’s story from start to finish). Instead, the narrative is closer to a web.

“Story is important in the game, but taking away the player’s attention and focus from what they want is something we don’t like to do,” Shakir says. “We took a specific direction with the way we broke up the narrative in JC4. It’s not linear in any way. Our players like to go everywhere and do everything. How do we tell a story that can follow them and be there when we arrive? The metaphor I’ll give you is that it’s a crime scene with a dead body. The story is all the clues. We can discover the clues in any order, but it ultimately leads to how this person ended up being murdered. That’s how we structured the narrative. Everywhere you go, there is story. You might be playing with the creative toolset, doing a series of objectives, but there’s story and it all contributes to the narrative arc. It’s very different than other open-world games that put you on a linear track. The critical path is the world. We never want to tell the player where to go. We want the player to explore. We rarely backtrack.”

“While there is a central narrative based around the actions and consequences of the story, the user stories are a whole other game,” Shakir says. “That’s another arc. That’s the player’s arc.”

Because of this, Avalanche refuses to answer one of gaming’s most common questions. Putting a fine point on how long the story takes to complete becomes challenging when you throw players into the sandbox.

This approach results in a development process that considers players as much as it looks inward. Player experience is always important in game design and development, but Avalanche takes some of its inspiration from end users.

“Players just love to share what they’ve done,” Sundberg says. “Every story is different. That’s so much fun. It’s inspiration to us as developers. Players have helped us design the next game, because they’ve come up with things we never even conceived of.”

Avalanche embraces the idea of tinkering with Just Cause’s systems. At regular intervals throughout development, regular work is put on hold so the team can focus on uncovering and refining fun and unexpected things that are possible when Just Cause’s systems collide.

“One of the most fun things that’s happened in Just Cause is someone messing around with the vehicle hierarchy and figure out that they could turn the vehicle into a mech,” Shakir says. “That worked its way into one of our demo days—a day when the entire studio stops working on the game and starts crafting small, interesting things to add to the game—and it became DLC 3, Mech Land Assault.”

Sundberg and his team seem delighted when players color outside the lines. Just Cause 4 inspires players to chase storms, create explosions, and find creative ways to tinker with the multitude of cars, trucks, planes, and boats. Strange things are going to happen, and that’s part of the fun.

“We never want to limit ourselves trying to make a perfect experience for our players,” Shakir says. “Sometimes it’s those imperfections, those oddities, that make the best overall and unique experience for each individual player.”