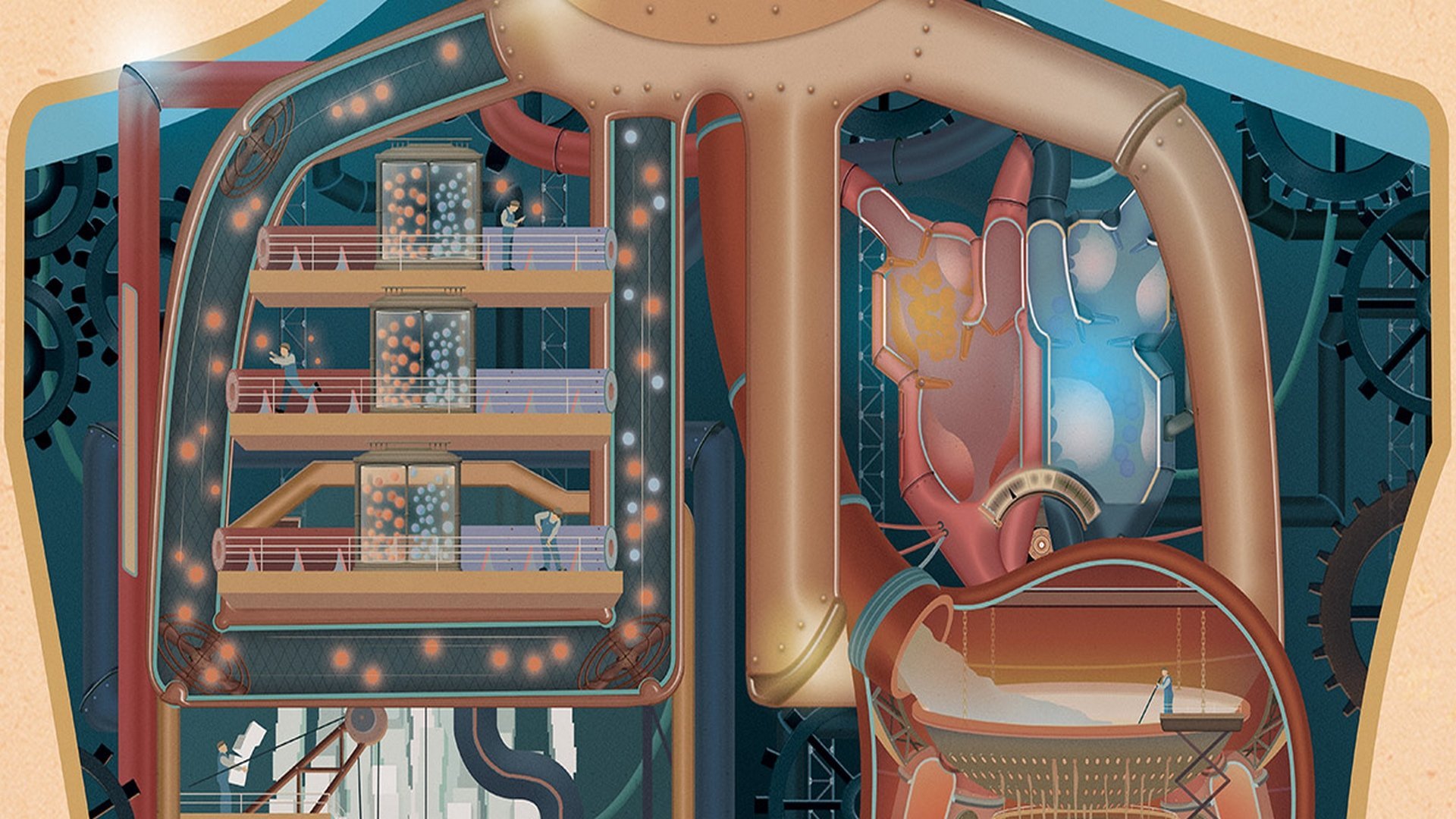 Arte may not be very well known outside of mainland Europe, but the publicly-funded Franco-German TV network has been making inroads into games for the last decade. It’s something of an institution in the European television world and its head of games, Adrien Larouzée, hopes the marriage of its own culture-loving viewership with games can expand both audiences for the better.

The company originally began co-producing games with developers, but in the last five years has moved towards publishing those games too. For smaller titles, particularly those developed in France where there’s not a lot of publisher support, this has been invaluable. Doing so has allowed Arte to take full advantage of its resources to help grow its game business.

“What we wanted to do is go to the next step and help our own productions to reach the market because we knew that we had a lot of people in-house, like for marketing, for PR, for social media,” Larouzée explains. “Social media for Arte is huge. We have really experienced, dedicated teams who know what they are talking about. All we needed was a few outsourced skills like QA, or video game specific PR.

“Our audience is not really the typical video game player, but it's really huge and I know that these kinds of games can interest a lot of people on there. It's just they're most of the time people who say 'I don't play. I don't like playing video games'. But if it's Arte's game, maybe they will be willing to take a look at it. And this is why it makes sense to mix those skills. Video game industry skills, plus our own internal people who really know how to reach a wider audience and people that are curious about video games, but who don't really play that often. I believe this is a win-win most of the time.”

But unlike most publishers, Arte has a very hands-on attitude with the games it helps create. Larouzée calls it “co-production” and likens it more to the creation of a TV show than a game.

“Co-producing a game is not something that is common,” he says. “What we do is, the same way we co-finance and co-produce a TV program, we are doing this same on interactive projects. We pick projects that we feel are relevant with our editorial and if the project fits we go ahead and help them with money and with a lot of feedback, like a classic editorial partnership. It's what we do with TV. It's really common to bring the TV show attitude to the project, editorial wise.

“We have no developers or technical people, but we can follow the team and give them a lot of editorial feedback -- narrative and artistic direction, but also on gameplay because we know the video game industry. This means developers are bringing us projects pretty early in development. Most of the time it's a prototype or a game design document or a pitch and if it fits we can either go to a pre-production phase or directly into production with them.”

One of these games was an untitled project currently planned to tie into the two hundredth anniversary of the writing of Frankenstein. The full game is due for release next year, but a prequel is already available and gives an idea of what to expect. The prequel delves into the events surrounding the writing of the novel, since it has its own fascinating story, but also introduces the player to the gameplay of the full thing.

“It was kind of a game jam but for writers,” Larouzée says. “They gave themselves two weeks in a villa, locked in. It's known as the summer without summer because there was a volcano eruption, so there was no sun and everybody was a bit depressed. They decided to set themselves a challenge to write a ghost story in two weeks, during which Lord Byron wrote The Vampyre, which is the first real version of Dracula that we know, and Mary Shelley wrote Frankenstein. So this was really important for pop culture today.

“Our TV documentary will focus on the impact of Frankenstein in pop culture, but in this prequel game and in the game itself we want to pay tribute to what the book really is. This is way more philosophical and poetic than what we know about Frankenstein today, because in pop culture it's basically a monster that scares people.

“The Mary Shelley part is really only in the prequel, it won't show up in full game. The full game will be the creature’s journey. It will be called Frankenstein something, but in the end it's just a wanderer. It's just a stranger. What is it to be a wanderer in this world? Just how do you understand the world we live in? It was really the main idea of the Frankenstein book. She wanted to explore what it means to be alive in this world and this society.”

Another of Arte’s games, Vandals, is already available on mobile devices and will be coming to Switch in the near future. This game relies less heavily on the narrative, and is the most hardcore of the publisher’s games to date. It’s a turn-based stealth action game that tasks you with avoiding authority in order to create graffiti throughout the history of street art.

“It's the second game from Cosmografik Studio,” Larouzée says. “He's a French game designer and he made Type:Rider. In his first game he explored the history of typography, but he was also a street artist in Paris. And he was really curious about the history of street art, so he started to think about that kind of real-time infiltration, Metal Gear Solid style, but with a twist of street art. Can you infiltrate somewhere and paint something on the walls?

“A couple of years ago he switched his idea to something more turn-based strategy and he wanted to do that with a street art twist, so he pitched us this idea and we were in love with the concept, even if it's more hardcore gameplay than we are used to do. But it's a way to diffuse that culture and that art of street art.

“So we took five emblematic cities of the history of street art. I mean there's no official history of street art, but this is one way to read it. We started in Paris in '68 during the French civil unrest. Then we moved to New York with bursts of graffiti in the subway, then Berlin with the wall. And then we can move to Sao Paulo and Tokyo, because the street art scene is really important there and really specific, really different to what we are used to seeing.

These games may be grounded in history, but Arte’s intention is not necessarily to educate. These are real games that, the company hopes, will inspire a spark within players to go and educate themselves. The emphasis here is on culture.

“In the same way we connected Type:Rider with the actual history of typography, we really wanted to connect Vandals to real life," Larouzée continues. "What we did is that we dealt with different street artists to use their art inside the level design process. You can learn about historical figures from street art. For example, you see this art in the level and if you click it you will learn a thing or two about his career. This is how we bring almost a documentary aspect in a mind-bending puzzle.”

“I like to say that these games are not educational, but they can make you curious. We don't deliver any truth. The purpose is not to tell you how things work. For example, if I take our game Homo Machina, this is not a guide to how your body works. It’s more of a tribute to Fritz Kahn, whose art is amazing. So it was way more cultural than educational. And this is the same for typography or street art.

“We don't want you to know how Mary Shelley exactly wrote that book. But if I can maybe make you curious about the story behind it, that’s great. It's a tribute. We don't want to be educational. We don't to be in school. We don't want people to think that we are here to sell you a game in disguise. These are games, but they have this European cultural aspect. And we mostly work with auteur creators and young studios that need to reach a wider audience. We want help them to do that.”

Giving that opportunity to developers who wouldn’t otherwise have one is a big part of Arte’s focus. Larouzée wants to create a world where risky, arty, cultural games can find a home and find success.

“That's all I'm asking for, basically,” he says. “This is the kind of game I want to play and this is the kind of game I want the audience to be in contact with. I'm always a bit sad when I see hours of game announcements without any new stuff. Sometimes it all looks the same. I strongly believe that the more we do that, the more we will be able to make those games exist. There are so many great game designers out there who can't do anything because nobody wants to see their game or can't see their game. I really want to push that forward.”