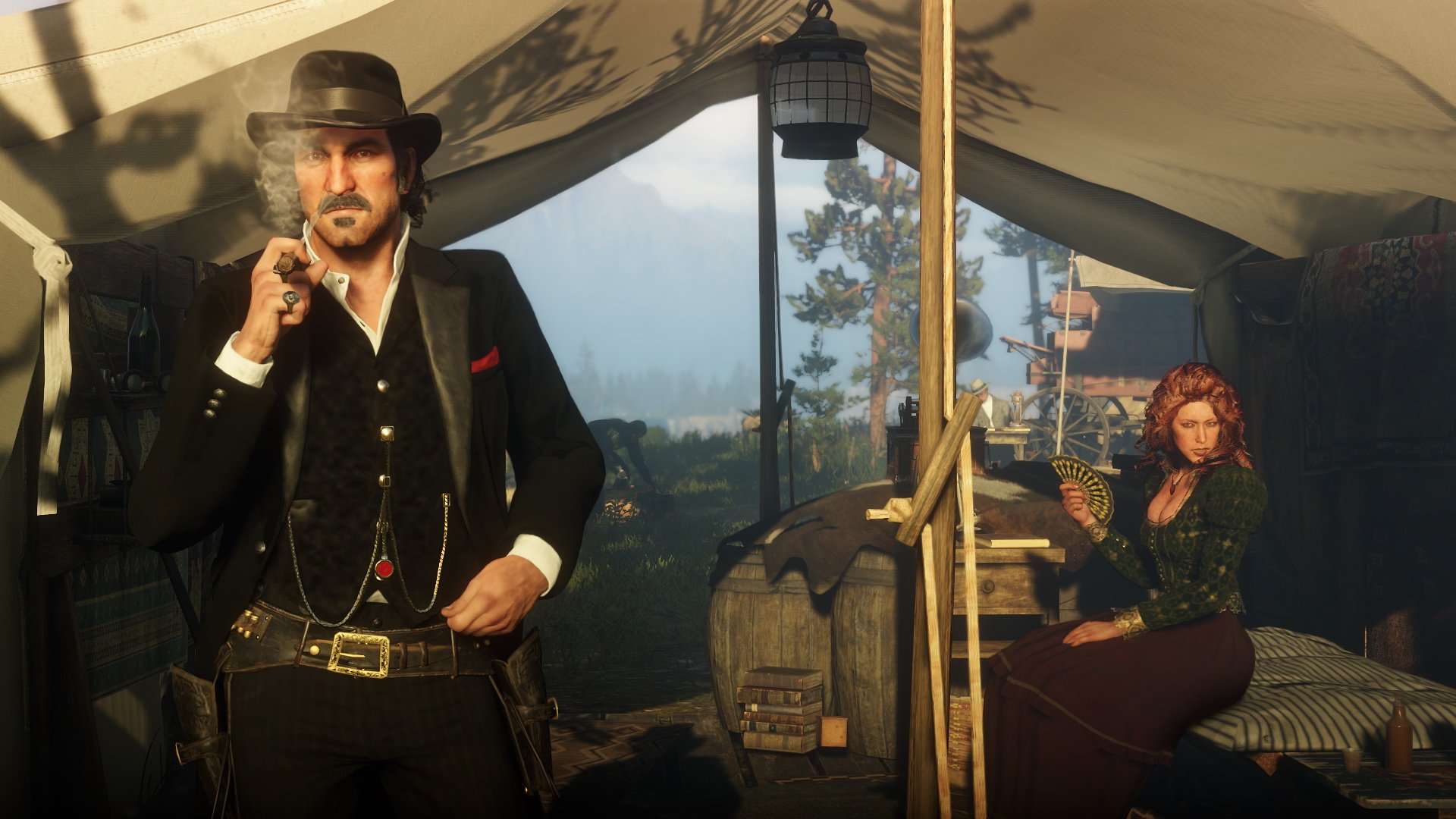 Red Dead Redemption 2, one of the biggest games of the year (let alone the console generation) has come barreling out of the wilds today. And while we don’t do traditional game reviews on GameDaily, our colleagues on other sites certainly do. Our consumer-friendly colleagues have put in the hard work (hundreds of hours between the lot of them) and have written reviews that discuss both the game and the atmosphere in which it was created.

Each and every reviewer that we're highlighting here had a number of incredibly positive things to say, peppered with some overlapping issues (clunky controls) with a soupçon of context about crunch. (Unless you’re Engadget, and then you take Rockstar to task in the form of a review.) Overall, reviews have acknowledged the incredibly rich, detailed world that the team at Rockstar crafted through painstaking crunch, although Engadget’s Jessica Conditt was the only reviewer to make company and crunch culture the focus of said review.

“... the near-obsessive attention to detail, along with a new gameplay structure that centers around a family-like group of outlaws, makes Red Dead Redemption 2 the most convincing open-world game I’ve ever played,” The Verge’s Andrew Webster wrote in his review.

“Red Dead Redemption 2 is easily the most nuanced and emotionally complex game Rockstar has ever made. This isn’t a developer known for restraint or grace, but both are on display when it comes to the characters and stories of RDR2. Of particular note is the way the game approaches race. Dutch’s gang is shockingly diverse, with black, Mexican, Native American, and mixed-race characters, and their leader is fiercely protective of them all.”

Kotaku’s Kirk Hamilton echoed this sentiment, as well: “Time and again I was struck by how seriously this game’s writers took their characters, themes, and subject matter. Abstract or no, Red Dead 2’s America is still a nation reeling from the Civil War, where women are not allowed to vote, and where Native Americans and their cultures are being systematically eradicated.”

Not everyone is sold on the racial diversity in Red Dead Redemption 2, mind you. There has been some criticism that Rockstar skates right up to the line but doesn’t do much more than employ buffoonery to convey the problems with white supremacy (as Mashable’s Adam Rosenberg discovered through blowing up KKK members in the midst of a cross-burning in the woods).

“Characters regularly speak about their experiences with bigotry, but the game mostly keeps the mechanisms of white supremacy at arm’s length,” Polygon’s Chris Plante wrote in his review (which Polygon has marked as a “Recommended” game). “At one point, Arthur takes Lenny [his black friend] drinking, only for his friend to get mobbed by the cops. But the next time he sees Lenny, all is well. Lenny reflects on the night at the saloon the way a frat boy flippantly jokes about an evening of memories erased by blackout drinking.”

Plante also calls attention to “the Wapiti, a fictional tribe that Rockstar PR told me is ‘not modelled on a specific tribe,’ but is a “mix of Native American peoples who have been pushed together by the changes being forced across the entire region.’ The game’s mashing together of real-world people, locations and groups into single entities produces story beats that range from benign to confused to insensitive and harmful.”

Each review that we’re highlighting touched on the languid pacing that begs patience and deep focus to fully immerse oneself in the game. Mashable’s review, written by Adam Rosenberg, touched on Red Dead Redemption 2’s headiness.

“The slower pace of long distance travel helps to keep this story focused. It also encourages you to really engage with the mind-boggling level of detail layered into RDR2's early America. Unmarked points of interest and unexpected gatherings don't crowd in enough to be a nuisance, but they pop up frequently.

This is all good stuff, but it comes with a heavy investment. You won't finish in a week without putting in an unhealthy amount of time (trust me, I know from personal experience). This is a game that raises a middle finger to the content binge. You're meant to soak in this world, this story, over multiple weeks if not months.”

Hamilton’s review marveled at how defiant the game was, especially in terms of its pacing and how it refuses to be “dominated” by players.

“It is defiantly slow-paced, exuberantly unfun, and wholly unconcerned with catering to the needs or wants of its players,” Hamilton wrote. “It is also captivating, poignant, and at times shockingly entertaining. It moves with the clumsy heaviness of a 19th century locomotive, but like that locomotive becomes unstoppable once it builds up a head of steam.

“I only rarely found Red Dead 2 to be “fun” in the way I find many other video games to be fun. The physical act of playing is rarely pleasurable on its own. It is often tiring and cumbersome, though no less thrilling for it. No in-game activity approaches the tactilely pleasing acts of firing a space-rifle in Destiny, axing a demon in God of War, or jumping on goombas in Super Mario Bros. Red Dead 2 continues Rockstar’s longstanding rejection of the notions that input response should be snappy, that control schemes should be empowering and intuitive, and that animation systems should favor player input over believable on-screen action.”

Everyone agrees that Rockstar’s studios have created something truly special with Red Dead Redemption 2. The human effort, the very human cost, is mind-boggling. Keza MacDonald, who reviewed RDR2 for The Guardian, acknowledged the writers in particular.

“With very few exceptions, the many stories that Rockstar’s writers have set out to tell about this group of outlaws land perfectly, the enjoyable twists and turns of individual missions and chapters feeding into an exciting, sophisticated and absorbing larger narrative – and the stories that you discover yourself within its world are no less compelling,” MacDonald wrote. “Around 2,000 people worked very hard (probably too hard, in some cases) to make this game possible. Every last one of them should be proud of their contribution.”

Plante dove a little deeper into the culture of crunch at Rockstar, but his reference to the GQ profile on the Housers was particularly poignant: “As the game spirals in its final chapters — in tone, in ambition, in message — I can feel the circumstance of its creation. This isn’t the magic of elves; it’s the creative hodgepodge of thousands of individuals.”

But it was Engadget that really took Rockstar to task about crunch with their review and Conditt pulled no punches.

“This was the context banging around in my head as I booted up Red Dead Redemption 2 for the first time,” Conditt wrote. “Crunch. It wasn't at the forefront of my mind, but it lingered behind every button press as I adjusted my screen's brightness using the Rockstar logo as a guide, and as I watched the impressive introductory scenes light up my living room, complete with credits overlaid in bright red, all-caps type.

“While I admire these in-game moments, they're also the ones that shake me out of Red Dead Redemption 2's spell the most abruptly. The more beautiful the scene, the more obvious how much talent and work has gone into it, the more I think about the people behind it and how many 80-hour weeks they might have endured; how their emotional and physical health must have fared; how many family milestones they may have missed. The more I think about crunch.

“Red Dead Redemption 2 is a gorgeous, high-quality game that developers should be proud of. It's an incredibly impressive effort that, over eight years, included writing 500,000 lines of dialogue, scoring 192 pieces of music for interactive scenes, spending 2,200 days in the motion capture studio with 1,200 actors, and coding more than 300,000 animations. Meeting, building, testing and editing, again and again, eight years over, at times for 80 hours a week.”

GameDailydotReview strives to provide context and insight into different critical perspectives on the biggest game launches.