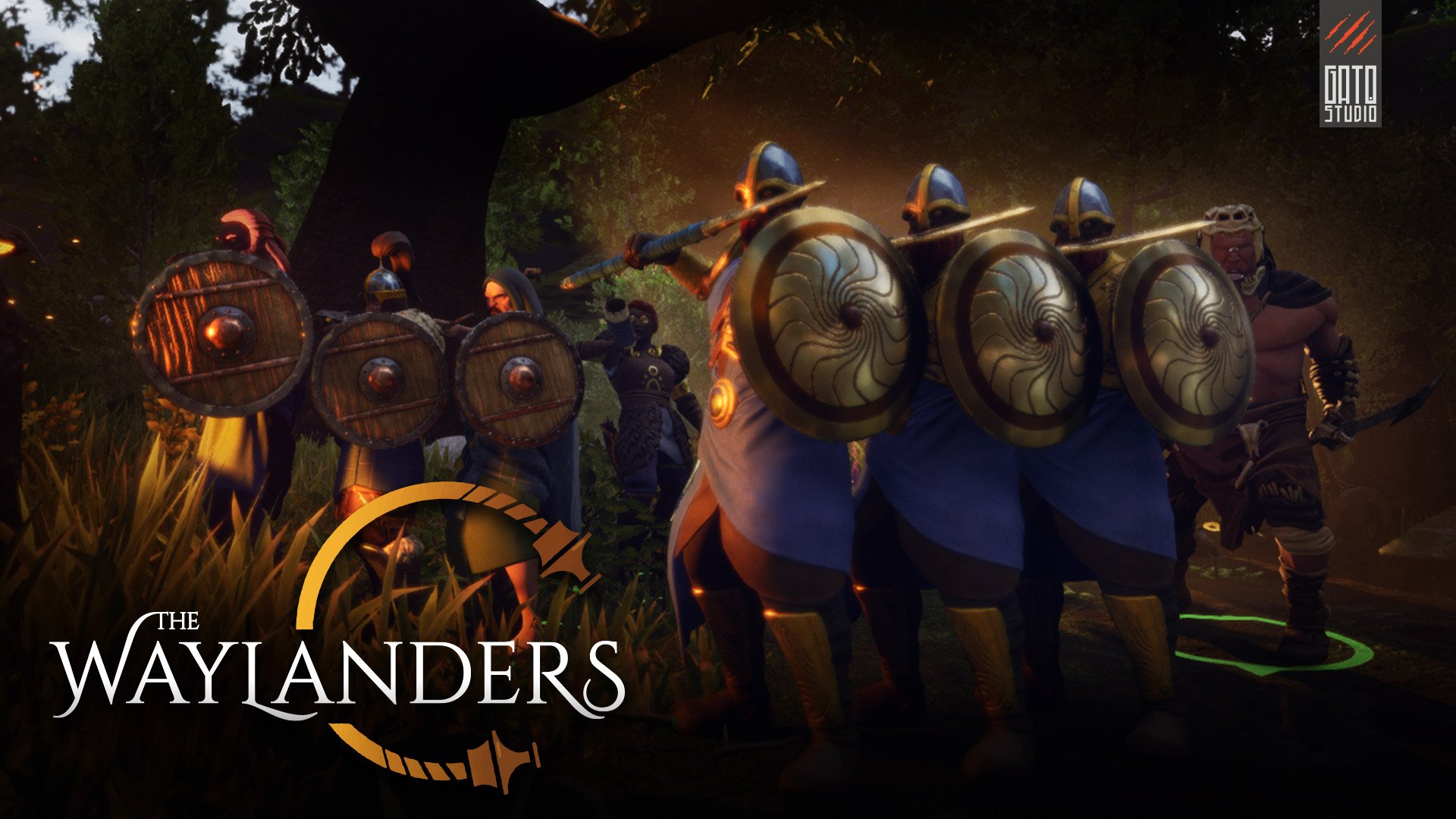 Indie RPGs are a dime-a-dozen and often tread the line between derivative and outlandish. The Waylanders, the second game from Spanish indie studio, Gato Salvaje, is a different kind of RPG that doesn't rely on tired tropes or busted mechanics. The Waylanders is an exploration of time and nature, utilizing traditional tactical strategy RPG elements (with an emphasis on party formation) and rich narrative design.

In an interview with GameDaily, Gato Salvaje's CEO, Sergio Prieto and his brother, Fernando Prieto Prado (a partner at Gato), spoke candidly about The Waylanders, Spain's indie scene, and some of the inherent challenges with Kickstarter they faced while developing their new game.

Gato Salvaje Studio was formed in 2010 with Prieto and Gato's head of animation in A Coruña, Spain. The Waylanders isn't their first project, but it is their first of this kind. Prado's market research had revealed that the price point that makes the most money on Steam isn't the smallest indie games (the ones that are priced under $20) -- it's the ones that are priced in between microstudios and triple-I (high budget indie) at around $30-$40. The Waylanders was a way to really get their feet wet in triple-I.

Prior to Waylanders, Gato Salvaje's claim to Spanish indie fame has been AR-K: The Great Escape, an episodic point-and-click adventure game. It was their first Kickstarter, launched in 2012, and is considered a pioneering video game project for the platform in Spain. Prado admits that it took them far too long to pull the game together and they're not pleased with the outcome of the first two episodes.

"Look, your first game is like your first love," Prado said, a little sheepishly. "You love them and you kind of hate them by the end of it."

But with the release of the fourth (and final) episode on the way for early 2019, the studio is pledging to go back and fix the first two episodes to bring the quality up to a standard that they're comfortable with. After all, there aren't that many indie game studios in Spain, let alone in A Coruña, and Gato wants to make sure that they continue to take care of their fans.

The Spanish indie scene is troubled and has gone through a number of fits and starts since the massive recession in Spain. Gato is located about a 10-hour drive to Barcelona, but moving to a larger city was out of the budget (and therefore out of the question) for Gato.

"The indie industry in Spain is full of artists," Prado noted. "They often don't care about the money, but they have to if they want to keep making games. They say, 'I don't care, I just want to make art,' but that gets them into trouble in the long term. We've seen it happen a number of times."

Young people often have to leave A Coruña to find work in the bigger cities, where more employers provide a greater number of options -- we’ve witnessed this in North America as well where game development tends to be centered around major cities like San Francisco, Toronto, etc. Two other major indie studios in Spain, Tequila Works and MercurySteam, are both located in Madrid, for example. But because Gato had no way to relocate to a larger city, they did something special, instead. They trained the people they wanted to nurture for particular positions in the company. They found a number of junior games workers across a number of disciplines, trained them up, and ended up hiring about a third of those that they trained.

Their goal is to do this for more companies in their city, if they continue to be successful in their endeavors. They want to show the Spanish indie scene that games are art, yes, but it's commercial art. It needs to make money and in order to make money, you need talent. If that talent keeps moving away (either to bigger Spanish cities or internationally), then the industry will find itself dead in the water.

"This is kind of like what CD Projekt Red did in Poland years ago," Prado said. "We're not saying that we're going to be as big as they are. But look at their impact. They did this years ago. There's nothing stopping us from being this force of change right now and in the place we call home."

With budget in mind, Gato has been diligent about their development on Waylanders. They've been working on the concept for a little over a year and in that year, they've done a lot of solidifying what they envision the game to be. On their Kickstarter page, Gato describes Waylanders as "a party-based RPG inspired by beloved classics such as Dragon Age: Origins, Neverwinter Nights 2 or Baldur's Gate. Featuring innovative and tactical combat system, The Waylanders brings the legends of the Celtic cultures to life."

RPGs are big right now, as we've seen with Horizon Zero Dawn, Assassin's Creed Odyssey (and Origins), and Prieto believes that Waylanders can be what scratches a very BioWare itch that a lot of folks are having. And maybe that's what drew former Dragon Age creative director, Mike Laidlaw, to the Waylanders team.

Part of how Laidlaw ended up coming to the project is an interesting tale, Prado told me. He backed their last Kickstarter, AR-K, and loved it so much that once he'd announced he was quitting BioWare, Gato offered him a consulting gig on the spot. He's helped with a lot of high-level narrative design throughout the game and has helped to polish up their ideas so that they can be communicated to players.

Laidlaw isn't the only big name attached to the project, either. Emily Grace Buck, narrative designer and vocal advocate for games workers rights, will be joining the project as of today, as opposed to being locked behind a Kickstarter stretch goal.

They also have one more big name working on the project, but they're not prepared to disclose who it is yet. (There's an NDA that they're holding to for the time being.) Prado insists that this person is a really big deal and if people aren't sold on the team working on Waylanders by now, they will be as soon as this person's identity is revealed.

Until the Kickstarter has wrapped up, though, that's where the focus has to be. (Not on mysterious team members.) They've been planning this campaign for about a year. "We started thinking about when to launch the campaign about a year ago," Prado said. "We didn't know the exact day, but we knew which month we wanted to go live. So, we've been putting a lot of thought and energy and work into how the campaign is running."

Gato has been involved in a number of Spanish Kickstarter campaigns and has seen all of them hit their goals, but Waylanders is definitely different. It's catering to a more international audience and that has its own challenges.

Gato isn't worried that they're 9 days out from the end of the campaign. This isn't about determining viability for Waylanders.

"We've been working on the game for a year," Prado said, laughing. "Don't worry, there's money either way."

The Kickstarter campaign accounts for 7.5 percent of the total budget for the game, which is around $2 million Euros. They have a team of 40 working on the game full-time. Without outside investment, this wouldn't be possible. Instead, the Kickstarter is a good way to gauge how people feel about Waylanders. And even then, the numbers aren't quite what they seem.

"Our conversion rate is excellent," Prado clarified. "It isn't that people aren't interested. It's that we're seeing about a third of the traffic that we should be around this point in the campaign. The numbers just aren't there. We were banking on [outside influences] that didn't come about, so we've had to make do. But this game will be made. It deserves to be made."

Kicktraq doesn't share Prado's optimism, however. Looking at the trajectory of what could be expected, even if everything picks up from this moment forward, they still won't make it. Gato Salvaje has a history of defying Kicktraq's analysis, mind you. With AR-K, they had a surge of traffic and backers in the last three days, similar to what Prado indicated during our conversation.

So, with only a third of the campaign's expected traffic, they've still managed to hit just over halfway to their goal of $150,000. Prado is confident that they'll make their goal, as the last three days of the campaign is where the bulk of the money is made (from their experience).

"We're confident that we'll make it, but if we don't, we'll take what we've learned (and we're learning a lot now) and see where we failed," Prado said. "But we won't take that as proof that this game isn't what people want. Instead, we'll look at what we did wrong in the campaign."

Kickstarter is a notoriously challenging animal to wrangle, but with experienced strategists at the helm, Waylanders is set up for success in a way that many, many indie games often aren't. Planning far enough in advance gives the team room to build out what they can manage for reward tiers, instead of simply reacting to a potential wildfire (and not being able to deliver).

Gato's dedication to methodical game development, as well as the ongoing investment in the indie game scene in A Coruña, is what sets them apart from a number of sophomoric game studios looking for a bite of the triple-I pie. The Waylanders is the way in, but Gato's grit and resolution (even when they stumble) is what will ultimately determine the payoff.