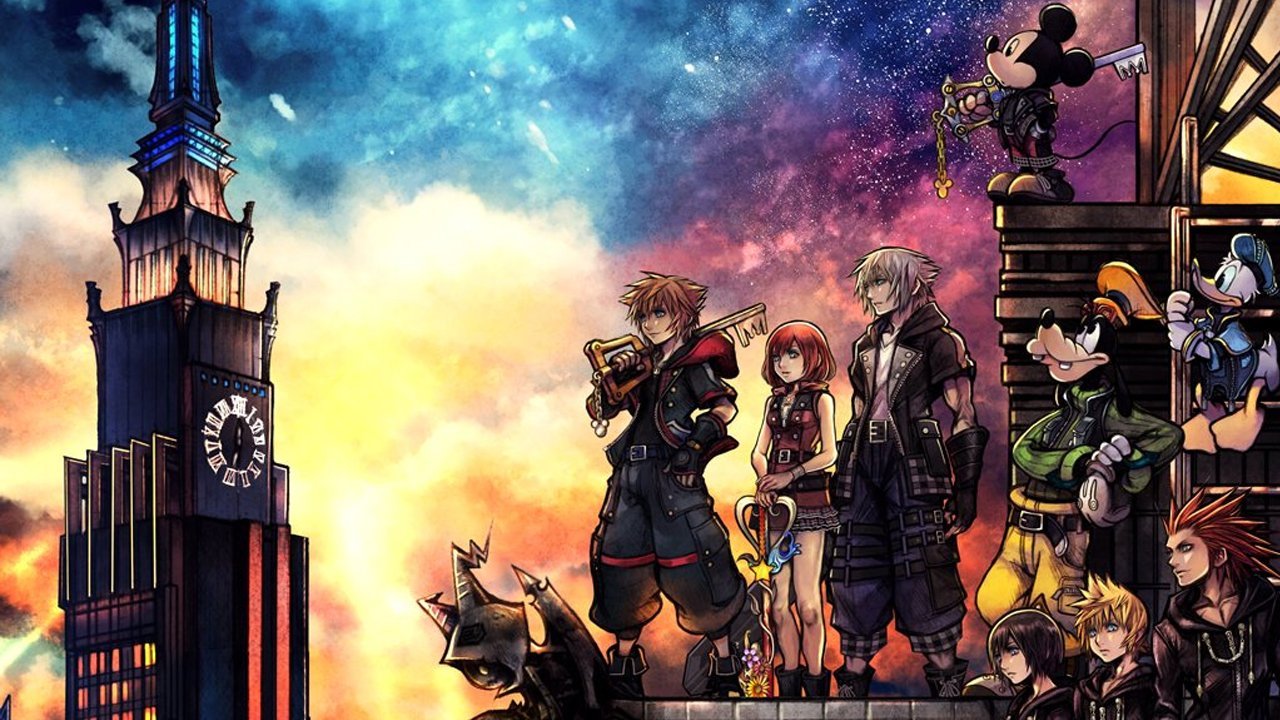 It feels like the longest wait. It’s been 14 years since the series’ last numbered installment, not including the numerous PSP/Nintendo (3)DS spin-offs and HD collections - but finally, Kingdom Hearts III will arrive on shelves from tomorrow. And to say it's been one of the most anticipated games ever would be underselling it.

This is a series that, for all its faults, has a massive sentimental pull to fans of the Disney/Square Enix mashup ever since it began in 2001 on the PlayStation 2.

The mainline games in the series feature Sora, Donald Duck, and Goofy and it appears as though it might actually come to some kind of conclusion with Kingdom Hearts III. And for the most part, from reviews so far, it’s a satisfying end. But we can't emphasize "reviews so far" enough.

Square Enix have been strict on who has gotten code before the review embargo lifted this past Thursday, with several large outlets not receiving code before reviews were posted, therefore unable to post their review before tomorrow’s release. One was Eurogamer, which posted that it was one of the sites unable to receive code. From what we understand, Square Enix US was also strict on code distribution, but not as much as Square Enix EU.

Although, weirdly, a few reviews from mainland Europe did spring up as the clock expired on the embargo, primarily from Italy. The irony that one such outlet who got to post a review was Eurogamer’s Italian arm with a 8/10 was not lost on us.

In the United States, Game Informer went with a 9.5 for its score, saying its plot was “a dream come true for fans.” But, admitted reviewer Kimberly Wallace, the story could easily go over the heads of newer players.

“As much as I enjoyed the tale, newcomers (and even old fans who have just missed a few entries) will probably have a hard time following many portions,” said Wallace. “A memory archive in the menu provides short videos to get you up to speed or refresh your memory, but they’re not comprehensive. As a result, this is not a good place to jump into the series, but it remains rewarding for those who are already invested.”

The franchise’s convoluted and confusing story has been a massive negative, and was a concern for KH3 coming into launch, especially with the series making its Xbox debut for the first time on Xbox One and potential players who’ve not played the series before on PlayStation or Nintendo handheld platforms. KH3 picks up where Dream Drop Distance, the former 3DS exclusive that was brought to PlayStation 4 in 2017 in Kingdom Hearts 2.8 HD, and see’s Sora and crew try to stop Xehanort and the villainous Organization XIII once and for all.

One of the series’ strong points at the start was the massive crossover between Disney characters, worlds and franchises mixed with Square Enix’s Final Fantasy. But as USGamer’s Caty McCarthy mentioned, there’s little sign of that anymore.

“To say Kingdom Hearts has a reputation would be an understatement,” said McCarthy in her review, where she gave a 4.5/5. “In 2002 when the series debuted, it was a gaga mashup of Final Fantasy and Disney in an era where crossovers were not too common. Seeing all its characters interact, like Squall and Yuffie chatting merrily with famous faces of Walt Disney history, was bizarre even then.

“Perhaps it's less weird now though, where crossovers run aplenty across media. Now, with the long-anticipated full-blown return of the series with Kingdom Hearts 3, the Final Fantasy aspect has nearly vanished, save for a friendly Moogle shopkeeper. But Kingdom Hearts doesn't really need it anymore. It has 10 games worth of its own lore and original characters to reckon with.”

Kingdom Hearts III sees a few returns to some franchises and worlds such as Winnie the Pooh and 100 Acre Wood - to this writer’s absolute delight - plus the introduction of new worlds and franchises including Big Hero 6 in a story that takes place after that film, Toy Story in a plot that acts as a bridge between Toy Story 2 and 3, Monsters Inc, Entangled, and Frozen. GamesBeat’s review gave praise for how crafted these worlds are.

“It’s incredible how much these video game levels look like the movies that inspire them. Sometimes the Square Enix designers re-create entire scenes from the original films, and you can barely tell the difference,” said Mike Minotti in his 90/100 review.

“It’s also impressive how the three heroes — Sora, Donald Duck, and Goofy — blend into these worlds. For some, their physical appearance will change drastically. In Monsters Inc., each character has a new, monstrous look.”

But there was one other new world that didn’t sit well with one reviewer.

“The only time the magic failed? The Pirates of the Caribbean world,” said GamesRadar’s Rachel Weber in her 4/5 review. “I'm sure it sort of made sense around the early 2000s, but now - since the deeply average At World's End and all that nasty business with Johnny Depp - watching a Captain Jack Sparrow straight from the Uncanny Valley (and let's not even talk about the wax faced versions of Will Turner or Elizabeth Swann) gurn for Sora has rather lost its charm.”

Weber continued: “To add insult to injury the world is joyless too, and includes an aerial battle with a giant boss bird that was so enraging it nearly made me break Dry January.”

IGN’s 8.8 review went one higher, adding that the storytelling of the game’s worlds were “lackluster in light of the technical improvements the franchise has made.”

Said reviewer Jonathon Dornbush: “An attempt to satisfy both the Disney stories and the overarching plot causes some unfortunate stagnant pacing, with Disney plots playing out with slow dialogue and Sora, Donald, and Goofy occasionally questioning why they’re even visiting some of the included worlds at their outset.

“There’s obviously a lot of plot to balance, though, and after waiting years for this conclusion Kingdom Hearts 3 is so consistently fun to play and heartwarming in its ultimate resolutions that its impressive leaps forward stand brightly above its missteps.”

Dornbush did add beforehand, however, that the exploration of those worlds “highlights the scale and detail of each world.”

But for the most part, the consensus is that it was worth the long 14 year year wait, faults and all, something that is highlighted by Jade King in their 4.5/5 review for Trusted Reviews.

“I loved my time with Kingdom Hearts 3, embracing its melodramatic storytelling, whimsical selection of worlds and enjoyable combat right until the very end,” they said. “The closing act left me in tears as revelations I’ve been waiting over 13 years for finally came to fruition. I’ve grown up with these characters and the myriad worlds they inhabit, and knowing this could be their final adventure is a bittersweet pill to swallow.”

But not everyone was as taken with how Kingdom Hearts III ends not only Sora’s saga, but as potentially the last game in the entire series.

“I keep wondering what’s changed here. Is it the game? Or is it me? Is this what growing up feels like? Am I an old now?,” said Allegra Frank’s review for Polygon, unscored and without a badge for its recently-introduced ‘Polygon Recommends’ metric.

“Because it’s suddenly so confusing and frustrating how little rationale I get for this journey through Disney’s catalog, despite the characters and venues being the bulk of the franchise, and despite the script having so many words.”

Frank added at the end of her review: “Kingdom Hearts has always had a joyfulness that differentiated it from its contemporaries. Despite its reputation for complex story, it's simple action and positive energy felt like an antidote to so many other RPGs of the past couple of decades.

“But Kingdom Hearts isn’t simple anymore; it isn’t just joy and bright colors and Disney heroes. Instead, the conclusion of this story is tangled up in so many conflicting threads, each one a heavy burden on its hero, whose smile now feels unnerving. Kingdom Hearts 3 is an example of what can go wrong when a series that once stood in contrast to its peers as a lighthearted alternative loses its way.”

Kingdom Hearts may not be a series that’s simple (or clean) when it comes to its story across its many instalments in its near 20-year existence, to say the least of other smaller faults, but this is a game that so many people - those in the industry included - have been looking forward to for what feels like an eon.

It’s a series that is still so well loved, it’s been part of their lives in an incredibly important and meaningful way (one example of this is an incredible piece of writing a few years ago by former Polygon writer-turned-Nintendo of America PR Alexa Ray Corriea, who also authored a book on Kingdom Hearts II, on what the series has meant to her and her family).

Faults and all, when Kingdom Hearts III launches tomorrow, a 14 year wait will come to an end. And with it, excitement among series fans will begin as players go through what could be Sora, Donald, and Goofy’s last story together.